Many Leftist loons are promoting a recent video created by novelist and left-wing activist Don Winslow, which calls upon citizens to become cyber detectives to “monitor fellow citizens and report Trump supporters to authorities” while comparing the work of this “army of citizens” to that which led to the capture of al-Qaeda founder Osama bin Laden. 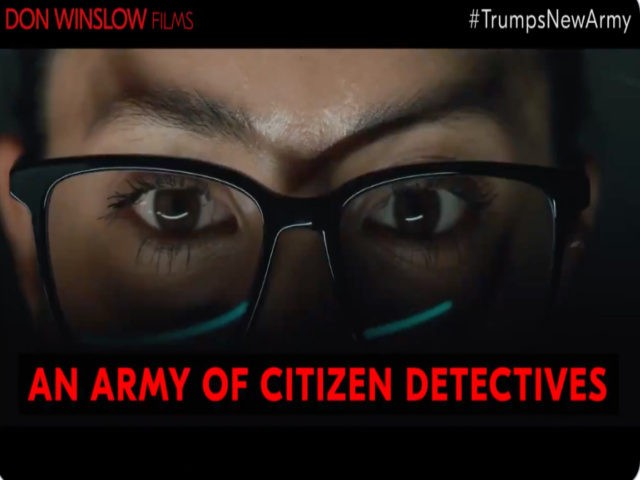 Breitbart “On January 20, Donald Trump will become the Commander-in-Chief of a different army,” the slightly over two-minute clip begins. The words “This army” are then displayed as Trump supporters in Washington, DC, flash on the screen.

The threat addressed is described as emanating from “radical” conservatives who live among us. The video, which has received over 3.5 million views since, then claims that the president will begin a civil war once out of office and that ordinary citizens must “fight back.”

“In the years ahead, Trump will lead his army of domestic terrorists. He will encourage and incite violence,” the clip states. “He will start a civil war.”

Outrageously, the clip then compares this “army of citizens” against Trump supporters to the monitoring and discovery of arch-terrorist Osama bin Laden.

Winslow called for a “citizen army patrolling the Internet” ready to expose, identify, notify law enforcement and notify employers. “I’m calling for an AN ARMY OF CITIZEN DETECTIVES to FIGHT #TrumpsNewArmy of white supremacy. Will you help? Will you spread word?” he wrote.

“No one in #TrumpsNewArmy should be given a pass,” he wrote in one tweet while clarifying in another that members of “Trump’s New Army” include Sen. Ted Cruz, Sen. Josh Hawley and GOP Rep. Lauren Boebert.

“After 9/11, we were told: ‘If you see something, say something.” “We have TERRORISTS in our midst. Some of us KNOW these people. It is our patriotic DUTY to expose them. Save a life. Say something. Expose #TrumpsNewArmy.”

Many on the left have already begun promoting the clip and encouraging viewers to sign on.

“America or Trump,” wrote Pulitzer Prize-winning senior art critic and New York Magazine columnist Jerry Saltz. “An army of citizens prepared to root out and arrest #TrumpsNewArmy in their new cause of Civil War and Right Wing Domestic Terrorism.”

“How many domestic terrorists will T**** inspire to violence against Americans in the next year?” asked Miami-based Huffington post columnist Grant Stern. “Probably a lot. #TrumpsNewArmy.” 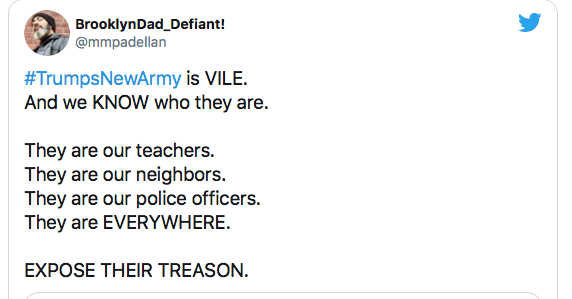 “The domestic terrorists are standing back (again) and standing by (again),” wrote Emmy-winning marketing director Ryan Bell. “#TrumpsNewArmy will continue to be a danger to our nation after he is no longer president.” 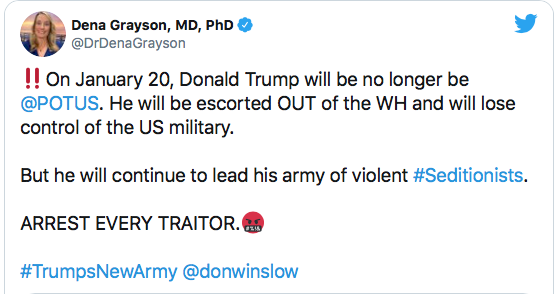 “Another powerful and poignant video from @donwinslow America it’s up to us!” wroteAuthor/activist and Huffington Post contributor Ariaa Jaeger. “If you want democracy participate in ensuring it succeeds! Please RT.”

But not everyone commended the clip’s message.

“You are delusional,” replied DJ Brian Dawe. “Once again… your blanket stereotyping of all Trump supporters and conservatives in general is some Hitler vs the Jew shit.”

“You should be at least temporality disabled by Twitter for inciting violence, but there is a clear double standard on this platform,” he added.

“This is so dangerous it’s hard to sum up in a tweet,” responded producer and director Robby Starbuck. “It puts a target on the head of every conservative, calls for war and propagandizes to form a vigilante group that would narc on neighbors.”

“If Hitler or Stalin we’re alive today, they’d proudly use your video,” he added. “Sick and evil.”

On January 20th Donald Trump will no longer be The Commander in Chief.

He will lose control of the U.S. Armed Forces and take control of a NEW ARMY. pic.twitter.com/59MHHaIegP

The real inciters of violence are the Leftist leaders in America. 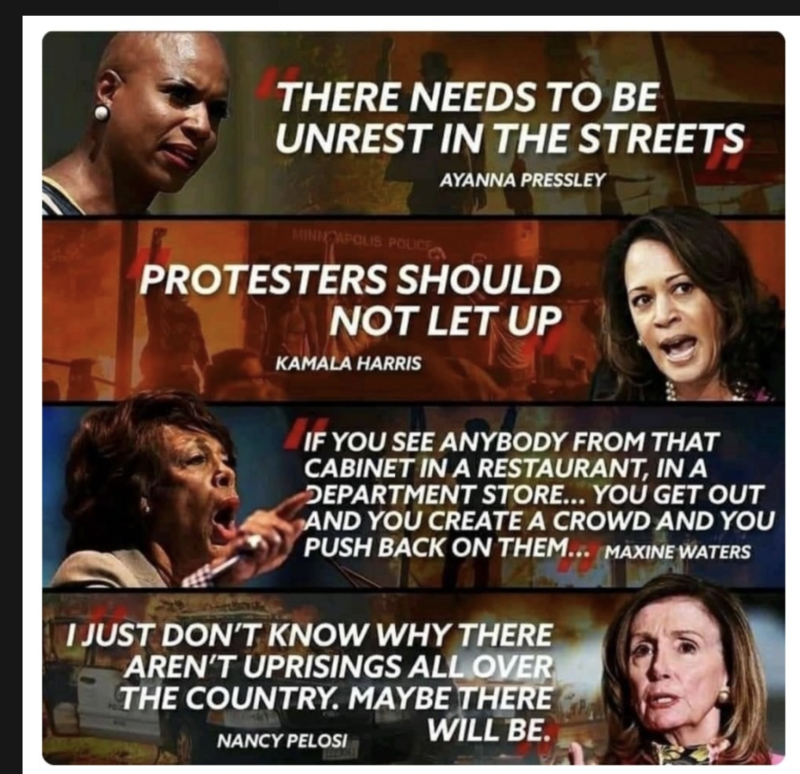