ROBERT MALLEY, the foreign-policy establishment favorite and Arafat apologist is just one more Obama alum in the new administration, but one that would particularly encourage Tehran. This is the same Robert Malley who was foreign policy adviser to then-presidential candidate Barack Obama in 2007, and was fired from his campaign team in 2008 because of his notorious ties to Hamas, the PLO and other jihadist, anti-Israel groups. 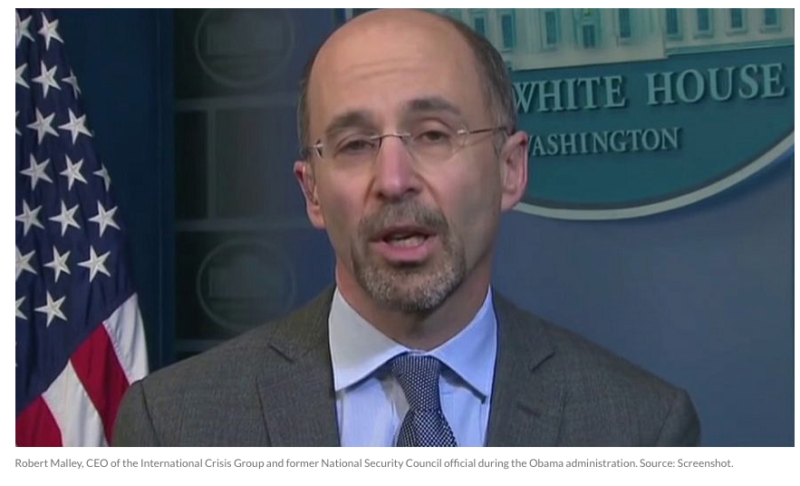 GellerReport One security official at the time said, “We are noting with concern some of Obama’s picks as advisers, particularly Robert Malley who has expressed sympathy to Hamas and Hezbollah and offered accounts of Israeli-Palestinian negotiations that don’t jibe with the facts.”

This guy is dangerous. Robert Malley is one of the architects of the radical JCPOA (Iran Nuclear Deal) with Iran. In addition, Malley was one of lead advisors for President Obama’s disastrous ISIS policy. Malley is also a rabid hater of Israel, and will often write viciously anti-Israel screeds in various publications. In fact, In 2008 Malley was actually removed from Obama’s election committee due to his meetings with Hamas officials.

Malley was part of the American negotiating team that dealt with Yasser Arafat at Camp David. He has presented a revisionist history of those negotiations since then, presenting a view that blames Israel for the failures of the negotiations. His version has been radically at odds with the views of Americans and Israelis (including the views of American Middle East negotiator Dennis Ross-also an adviser to Obama- and President Clinton).

It’s deeply troubling that President Biden would consider appointing Rob Malley to direct Iran policy. Malley has a long track record of sympathy for the Iranian regime & animus towards Israel. The ayatollahs wouldn’t believe their luck if he is selected. https://t.co/caxHhiXjKn

He has spent years representing the Palestinian point of view, co-writing a series of anti-Israel articles with Hussein Agha-a former Arafat adviser. Palestinian advocate. These have appeared in the New York Review of Books a publication that has served as a platform for a slew of anti-Israel advocates from Tony Judt to the aforementioned George Soros to the authors of the Israeli Lobby book Stephen Walt and John Mearsheimer. Malley has also called settlements “colonies” — implicitly condemning Israel as a “colonial” state.