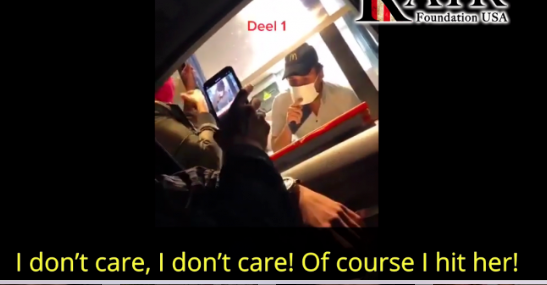 RAIR Foundation  In Belgium, a Muslim family is filmed abusing employees at a fast food drive-thru restaurant. The family became enraged after McDonald’s workers allegedly forgot to provide them with sauce for their fries. The family screams threats at the employees, physically attacks one, then threatens to call police for not providing proper sauce.

“My children don’t eat chips without sauce. I didn’t get the sauce. She [colleague] said everything was in the bag. Dirty whore, who do you think you are. You’re going to give me that sauce very quickly or I will call the police ”, the woman shouts.

Her attack, which was filmed by someone at the McDrive thru, has gone viral throughout Europe.

FYI: Brussels is predicted to become a Muslim majority city by 2030.