“They seem much more afraid now that Donald Trump has left office. With Donald Trump gone, they sense that a period of actual populism has begun, real populism, and they could be right,” says Tucker Carlson. 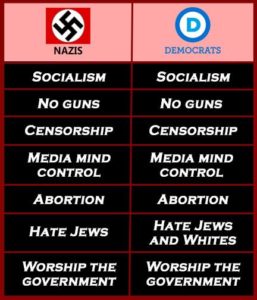 Within hours [of Joe Biden taking office], Democrats begin crushing even the mildest dissent. They shut down an entire social media company called Parler not because they did anything wrong, but similar because they couldn’t control it,” he said.

“They couldn’t take the chance that somebody on Parler might criticize them, so they eliminated it. They arrested a man, threw him in handcuffs because he made fun of Hillary Clinton on Twitter. That man is facing ten years in prison,” he continued.

“Democrats then declared war on their rival political party, not a metaphorical war, but an actual one — with soldiers and paramilitary law enforcement in the world’s most dominant powerful intelligence agency.”

“They denounced Republicans … as dangerous terrorists, likened them to ISIS and Al Qaeda. And, anyone who complained about this or fought back in any way was threatened with expulsion from Congress.”