Despite the fact that the Democratic Republic of Congo (DRC) has a large majority Christian population, in the past month, at least 100 mostly Christians have been killed by an Islamic extremist group in a series of attacks, using machetes and guns. The Allied Democratic Forces (ADF) Islamic militant group has wracked eastern DRC with violence for more than 20 years, killing many Christians.

OpenDoors UK (h/t nita)  On 14 January, approximately 46 people were killed in Ituri province by Islamic militants who are believed to be part of the ADF. The community that was attacked belongs to the Pygmy ethnic group – there are about half a million people belonging to this ethnic group in DRC, and they face extensive persecution and discrimination.

On 4 January, an estimated 22 civilians were killed in an overnight raid on the village of Mwenda, in the Beni region of neighbouring North Kivu province. A community leader reported that guns and machetes were used, and that at least 17 nearby villagers had been murdered with machetes a week earlier. Around the same time, the ADF killed another 25 people in the village of Tingwe, in the same region.

“These predominantly Christian communities are attacked by an Islamic extremist group with a clear Islamic expansionist agenda,” says Illia Djadi, an Open Doors spokesperson on freedom of religion or belief in sub-Saharan Africa. “It is a reminder of what is happening in other parts of the central Sahel region – groups like Boko Haram in northeast Nigeria, for example. The ideology, the agenda of establishing a ‘caliphate’ in the region, and the way they operate is the same, and we can see how they afflict terrible suffering on innocent people.”

DRC has a very high percentage of Christians, at over 95 per cent of the population, but Islamic extremist violence has soared over the past year and continues to worsen. The violence that Christians face in this country is among the very worst in the world.

The ADF is a militant Islamic group with a clear mission of attacking, kidnapping and killing Christians, as well as training and sending jihadists to other countries in Africa. The group was formed in 1996, merging several existing rebel groups, and initially focused its destructive action on Uganda.

“A war has been declared against the DRC,” says Carly Nzanzu Kasivita, a governor of North Kivu. He called for a ‘national and international mobilisation’ to combat the ongoing violence. A UN report from 2020 agreed that the situation is dire, suggesting that ‘widespread, systematic and extremely brutal’ human rights abuses by the ADF ‘could constitute, by their nature and scope, crimes against humanity and war crimes’. 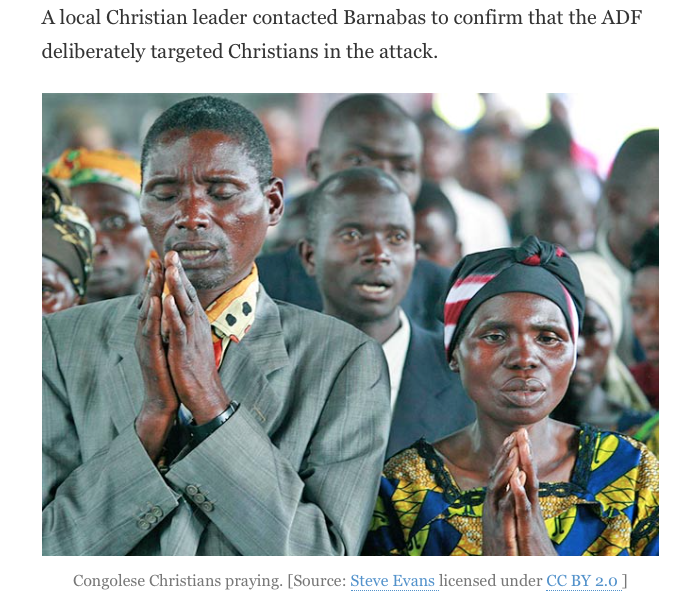 The UN’s Secretary General, Antonio Guterres, adds that the ADF is connected to other jihadist groups across Africa. “In my opinion the ADF today is part of a network that starts in Libya and stretches to the Sahel, to the Lake Chad region, and which is present in Mozambique,” he told RFI. The ADF has not formally linked itself with so-called Islamic State (IS), but IS has started to claim responsibility for some of the attacks by ADF and has called Congo the ‘Central Africa Province’ of the ‘caliphate’.

The conflict in Eastern Congo has killed as many as 6 million people — more than any war since WWII. Yet it remains one of the most underreported crises.