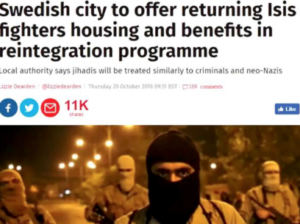 Unchecked Muslim immigration from Africa and the Middle East is turning the once safest country in the word into a crime-ridden third world hellhole thanks to surging violence, grenade attacks, and a soaring rape epidemic. Think about it – if there were no Muslim migrants in Sweden, cases of violent rape would drop by more than 90%.

Pretty soon Swedish citizens will have to seek asylum in other countries because of the Muslim asylum seekers in their country. One of the comments under the video describes it best: “I’m a Swede. We are absolutely done, its utter chaos here and our media and government hide it from the world.”