According to Rajiv Pandit, a Kashmiri Pandit who is currently a US citizen, expressed his disbelief as the Democrat Congresswoman from Michigan Rashid Tlaib joined a panel featuring known Islamic extremists to peddle anti-India propaganda while calling for violent ‘jihad’ in Kashmir. 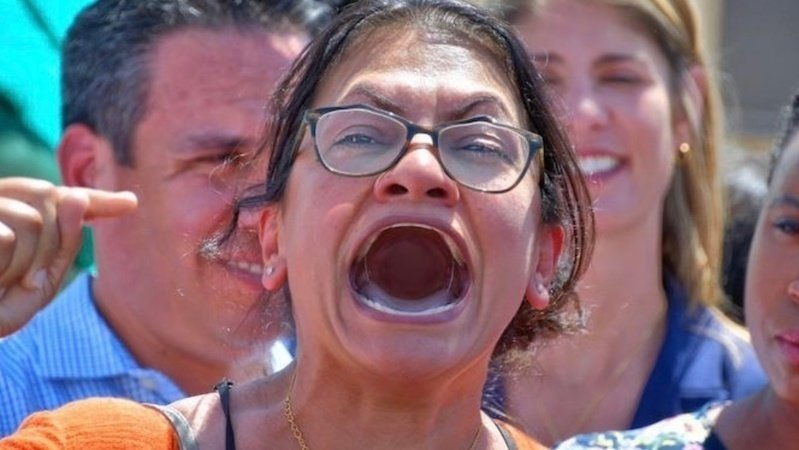 Rashida Tlaib, a Muslim Congresswoman from Michigan, is known for her anti-India propaganda. Along with fellow Democratics such as Pramila Jayapal, Ilhan Omar and Alexandria Ocasio-Cortez, Tlaib has been at the forefront of leading anti-India stand inside the House of Representatives.

In 2019, Tlaib introduced a resolution against India seeking to condemn the Modi government for scrapping special status of Kashmir and challenging India’s sovereignty over it.

However, in a major embarrassment, Tlaib did not even get a single co-sponsor for her resolution.

In his tweet, Pandit tagged Nancy Pelosi, the Speaker of the United States House of Representatives, calling for an Ethics investigation against Congresswoman Tlaib for colluding with Islamic terrorists to propagate anti-India views, especially on Kashmir.

Dear @SpeakerPelosi: As a Kashmiri American, I am outraged and stunned that @RepRashida joined a panel featuring known Islamists calling for jihad in Kashmir, organized by a group that platforms a U.S. Specially Designated Global Terrorist. Ethics investigation needed. 1/4 pic.twitter.com/aA06qRfeFF

It is important to note that ICNA is a notorious Islamic organization in North America that has intimate links with terror groups such as Hamas, the Muslim Brotherhood, Jamaat-e-Islami and other Islamic terror groups. ICNA is widely known as a front for Pakistan-based terror groups to push global propaganda against India, especially on the issue of Kashmir. Several anti-India propagandists, including convicted Pakistani spy and lobbyist Ghulam Nabi Fai, regularly speak at events organised by ICNA. 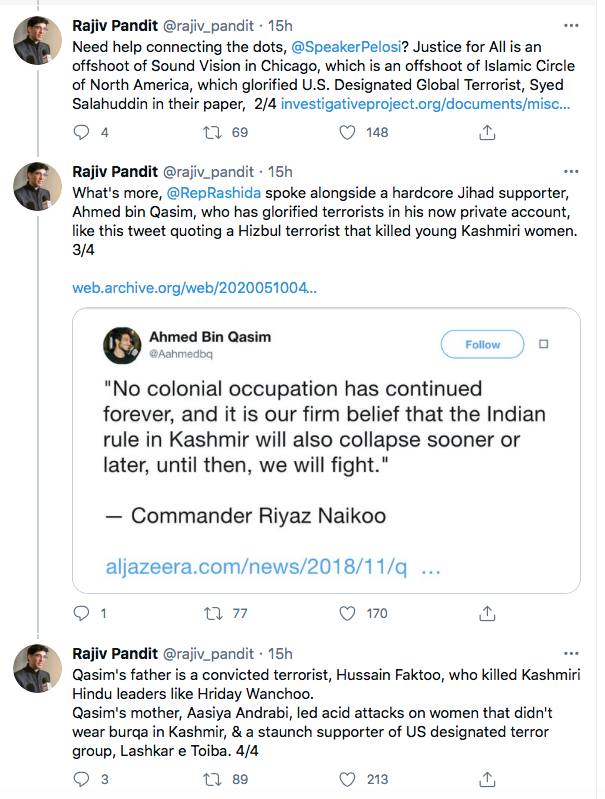 ICNA has glorified US-designated global terrorist, Syed Salahuddin in its magazine ‘The Message’ and hailed Syed Salahuddin as the ‘undisputed leader of the Mujahideen that is struggling to liberate the territory of Kashmir from India.

Syed Salahuddin is the chief of Pakistan-sponsored terrorist outfit Hizb-ul Mujahideen and is also the key mastermind of the attack on Pathankot airbase in Punjab in 2016. The Hizbul terrorist also operates the United Jihad Council (UJC) that serves as an umbrella organisation for other radical Islamist groups such as Lashkar-e-Taiba and Jaish-e-Mohammad.

Congresswoman Rashida Tlaib also shared a stage and spoke alongside another hardcore Islamic terror supporter, Ahmed bin Qasim. Ahmed bin Qasim is the son of terrorist Asiya Andrabi and Qasim Faktoo. Faktoo is the founding member of terror outfit Hizb-ul Mujahideen and Asiya Andrabi is currently in jail for her involvement in terror activities inside Kashmir.

Like his parents, Ahmed bin Qasim is nothing but an Islamic terror sympathiser who has often glorified terrorists. In a tweet, Qasim had hailed Riyaz Naikoo – the top Hizb-ul-Mujahideen commander after the Indian Armed Forces killed him in May 2020. Calling Indian territories of Kashmir as a ‘colonial occupation’, he had shared an alleged quote of terrorist Riyaz Naikoo vowing to fight against India.

It is indeed shocking to realize that an elected American Congresswoman is openly embracing people associated with an organization like ICNA that openly supports Islamic terror groups. Here is Tlaib speaking at an ICNA convention: