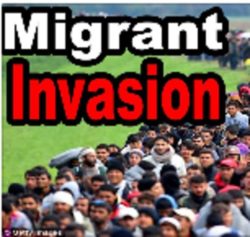 Many Swedish families are fleeing to Eastern Europe, where strict border controls and a virtual ban on Muslim immigration keeps the people safe from what is being called the Islamic plague: rapists, criminals, terrorists, and economic parasites. After all, it was a Polish King (John III Sobieski) who saved Western Europe by defeating the Muslim invaders from the Ottoman Empire at the Battle of Vienna in 1683.

Swedish police not only have their hands tied (arresting too many Muslims would make them ‘racist’), they lack the manpower to respond to all the calls for help that come in.  Teachers in schools are regularly threatened with knives. Muslim No Go Zones seem to be everywhere and private homes are being firebombed by Muslim thugs. In Malmo, a migrant-dominant suburb, there are shootings nearly everyday. But the media do not report it. Women in malls and on subways are sexually harassed and threatened, but if Swedish men intervene, they fear being stabbed.