In most respects, Denmark is a socially progressive Scandinavian nation, with low levels of inequality, generous welfare benefits and liberal views on gender equality. However, the influence of the Right-wing Danish People’s Party over the past 20 years has pushed even the supposedly centrist Social Democratic and Liberal parties to positions more associated with populists such as Donald Trump. 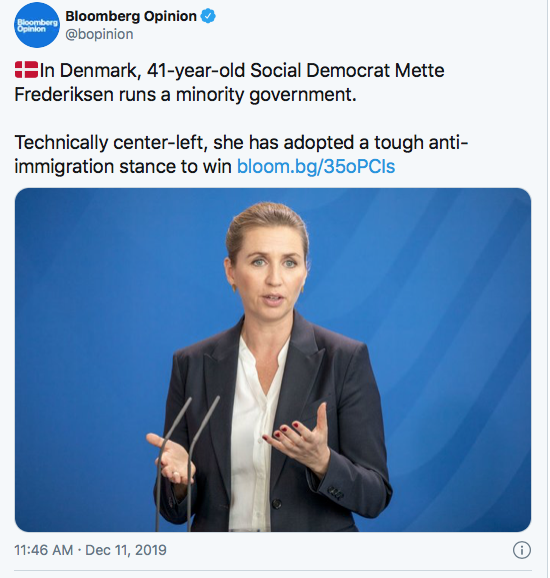 NZ Herald The New Right’s proposal would split those eligible for citizenship into two groups – those from largely Muslim areas such as the Middle East, North Africa, Turkey, Afghanistan and Pakistan, and those from elsewhere.

It would mean that when parliament comes to vote on its biannual citizenship bill, MPs would be able to vote through one group but not the other.

“It’s just common sense,” says Mette Thiesen, the New Right’s citizenship spokesman. “There are specific countries that we have had very bad experiences with: a lot of them have got citizenship in the past 40 years, and we can see in the statistics that both the citizens of these countries and their children are more criminal.”

It’s not just the populists. Under its new leader, Mette Frederiksen, the Social Democrats have swung decisively to the Right on immigration and won large numbers of working-class voters back from the Danish People’s Party. They have also grabbed the attention of ailing left-of-centre parties across Europe.

“For me, it is becoming increasingly clear that the price of unregulated globalisation, mass immigration and free movement of labour is paid by the lower classes,” Frederiksen wrote in the run-up to the 2019 election.

During the campaign, her party called for a cap on “non-western immigrants” and has called for those seeking asylum in the EU to wait for a decision at a camp in North Africa.

It was the Social Democrats who last year began the inter-party talks on tightening citizenship with a proposal to make it harder for convicted criminals to become citizens while those convicted of terrorism, gang crime and rape would be banned.

Even now, Denmark’s strict citizenship rules require that to be eligible, Applicants must, among other things, pass a Danish language test, sign an affidavit that she respects Danish values, and work an average of 30 hours a week for three and a half years after graduating from Copenhagen University.

The Liberal Party has also called for each applicant to have to answer five questions on Danish values, stating formally, for instance, that they agree women should be able to freely chose their romantic partners. It also wants applicants to submit a cover letter explaining why they want to become Danish, and to undergo an in-person interview to double-check that they have the right thoughts and ideas.

“Good behaviour alone is not enough. If you want to be a Danish citizen, you must have taken Denmark in,” Morten Dahlin, the Liberal Party citizenship spokesman, told the Jyllands-Posten newspaper.

Susi Meret, an associate professor at Aalborg University, described the talks as “a mainstreaming of positions which 20 years ago were seen as very much belonging to the populist Right”.

REMIX News Danish PM Frederiksen’s strong words echo former Immigration Minister Inger Støjberg, who recently wrote in a column for Danish media outlet BT that non-Western immigration has incredibly harmed Denmark. “One might as well be honest and put it bluntly: Non-Western, and thus primarily Muslim immigration, has harmed Denmark far more than it has benefited,” she wrote in BT.

“There is a strong over-representation of criminals from non-Western countries, as the crime statistics clearly indicate,” Støjberg writes. “Immigrants and descendants from non-western countries are overall overrepresented by 255 percent in relation to their actual share of the population in Denmark.”

Statistics from previous years also appear to support claims that non-Western people are driving crime in Denmark. For example, in 2012, the Danish national police reported that conviction rates per 1,000 residents in Denmark amounted to 12.9 for Danish citizens, 114.4 for Somali citizens and 54.3 for citizens coming from other countries.