Berlin seems to think it is making religious history. Christians, Muslims, and Jews will share a multi-million euro, multi-faith center that is being called “The House of One” built on top of the ruins of a church. Not surprisingly, the idea came from the Christian side of the triangle. 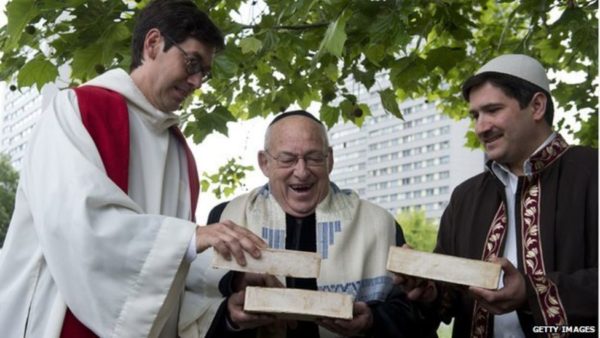 The imam involved, Kadir Sanci, sees the House of One as “a sign, a signal to the world that the great majority of Muslims are peaceful and not violent”. It’s also, he says, a place where different cultures can learn from each other. (HAH!)

In the past, different faiths have used the same buildings but not in the same period. Churches in southern Spain became mosques when the Ottoman Empire invaded and didn’t became cathedrals again until after the Christian conquest drove out the Muslim invaders 700 years later. Unbelievably, Muslims are once again being allowed to immigrate to Spain. In Turkey, most churches have already been turned into mosques as the Christian minority continues to disappear. In Britain, churches are rapidly becoming mosques as mass Muslim immigration is changing  the demographics of the country. Do you see a pattern here?

Here’s what I predict: In around 10 years, this House of One will live up to its name after the Jews are driven out, followed by the Christians, leaving it as a mega-mosque for Muslims, funded by German taxpayers.