Joe Biden took a strong stance against India, an important U.S. ally, and America when he appointed  Sameera Fazili to his administration. The controversial new Deputy Director of the National Economic Council has become an essential voice to the anti-Indian Islamic movement in the U.S. Sameera Fazili, became the first terror-linked hijab-wearing woman to conduct a White House Press Briefing in U.S. history. 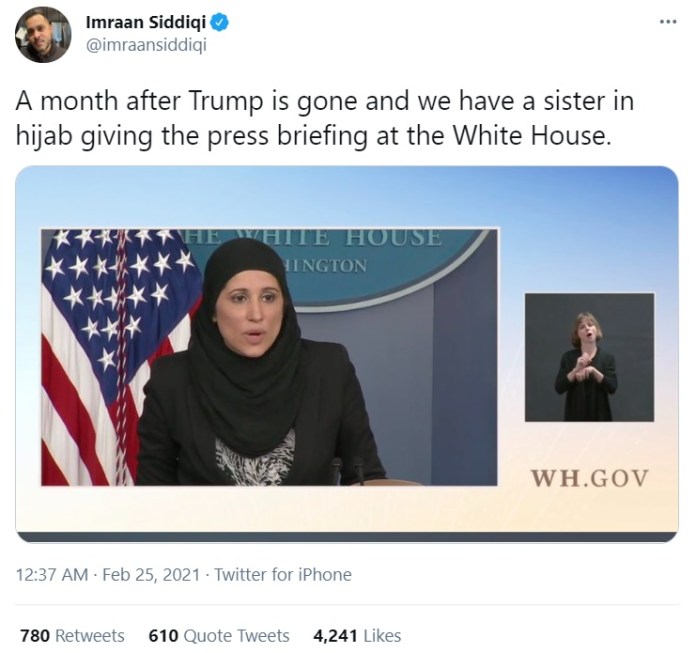 OpIndia Fazili is pro-Pakistan sympathizer who has been a vocal critic of India’s Kashmir policy which aims to foster peace and development in the terror infested region. Fazili is also an outspoken proponent of Kashmiri separatism and has often backed radical terror groups in the valley.

Just days after the Indian government had abrogated Article 370, Fazili had organized a terror-tied anti-India protest within the USA. The event was sponsored by Islamic terror groups such as Muslim-Brotherhood front groups, al-Qaeda sympathizers, along with left-wing elements both in India and outside.

Most importantly, she has ties with Hamas-linked Council on American-Islamic Relations (CAIR).  CAIR has been vocal about Fazili’s participation in the radical-led protests against India. Unsurprisingly, CAIR has also expressed its glee over Fazili addressing the press conference wearing an Islamic headbag. 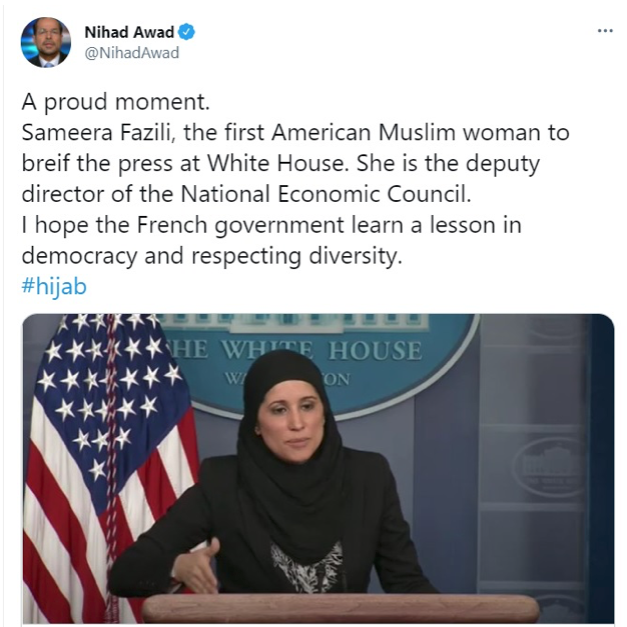 RAIR Foundation Kashmir is the seat of ancient Hindu spirituality and has always been intimately connected to India. Over the past century the area turned from predominantly Hindu and Buddhist to majority Islamic. Hindus, Buddhists, and Sikh’s were killed, driven out, and forced to convert to Islam. Today, Muslims constitute 67% of the population, the Hindus approximately 30%, the Buddhists 1%, and the Sikhs 2% of the population.

Jihadis trained and armed by Pakistan, continue to purge Kashmir of its native Hindu and Sikh population, to this day.

Pakistan is waging a terrorist campaign to carve out a separate Islamic country in that part of India using Jihadis and their radical left-wing supporters which have aspirations of turning Kashmir into another “Islamic State.”

Ironically, the Islam-apologist in the US celebrated Sameera Fazili’s ‘Hijabi’ appearance just a day after the Biden administration had killed several Muslims in Syria and Iraq by carrying out airstrikes. 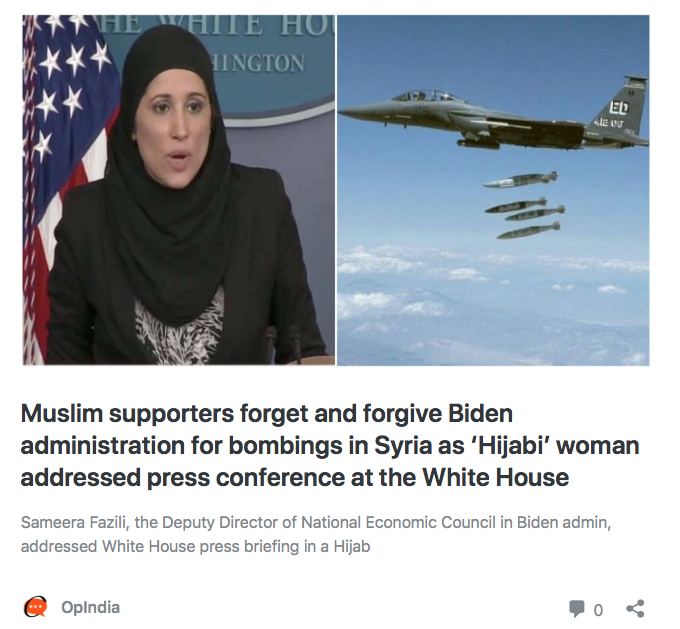 Islamic Pakistan has invaded and attempted to claim the territory, along with various separatist and terrorist groups demanding independence from India. Pakistan has infiltrated soldiers into Indian Kashmir, assisted anti-Indian and anti-Hindu Muslim terrorists in Jammu-Kashmir, and sponsored many murderous operations inside India.

On August 5, 2019, India’s Prime Minister Narendra Modi chose to repeal discriminatory Article 370 and 35A, a move supported by then President Donald Trump. The repeal ended the “temporary provision” that granted the state of Jammu and Kashmir a special autonomous status within the Indian union. Jammu and Kashmir are now governed by the same laws applicable to other Indian citizens. 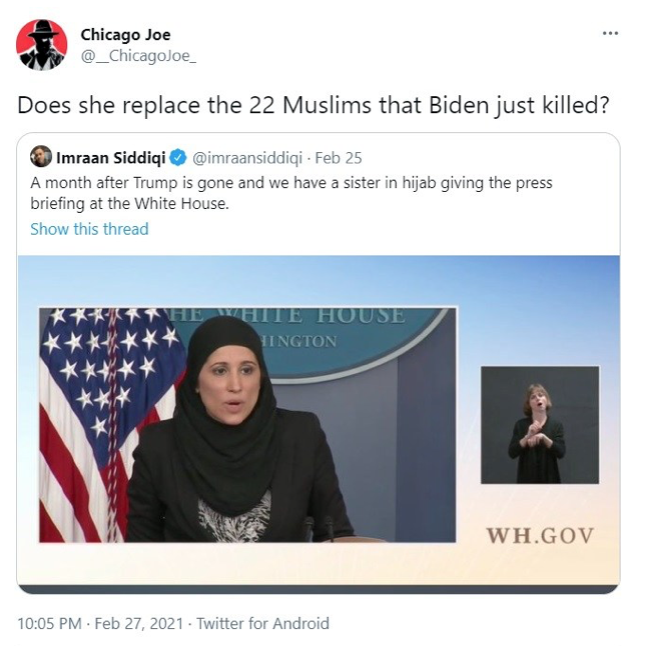 India is a secular country, who believes that regardless of one’s religious beliefs or gender, they should be governed by the same set of laws and enjoy the same freedoms. However, Islamic majority Jammu and Kashmir laws only supported Muslims freedoms and rights. Article 370 supported the Muslim majority population to discriminate against, and drive out non-Muslim minorities

Minorities were reduced to non-entities due to the discrimination legitimised by Article 370. LGBTQ could be thrown into jails.

Terror activities in Kashmir were also dealt a deafening blow with the end of Article 370. Terror operations in Kashmir were strangled when the Indian government barred the communications network in Jammu & Kashmir. Many of the terrorists went underground and some moved to other states in India. Those with direct and indirect links with terror operatives were detained with no mobility to create chaos.