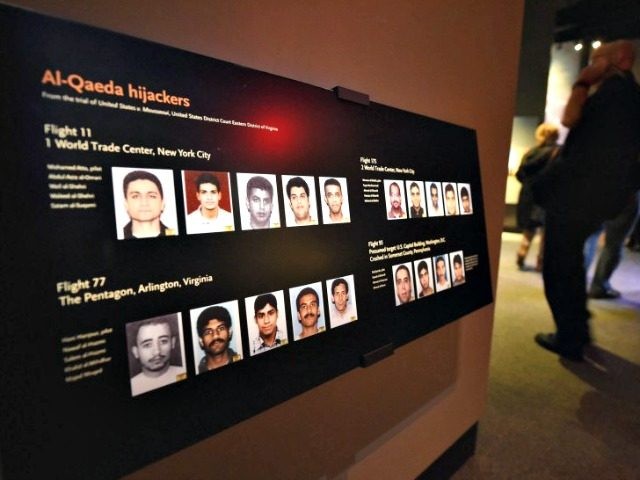 Breitbart (h/t nita)  FBI Director Christopher Wray testified before a Senate panel that the U.S. relies heavily on information provided by the origin countries of individuals trying to enter America to vet them for criminal and terrorist ties effectively.

However, Wray conceded that America could not count on most countries listed on Trump’s travel ban to provide accurate information, if any, on potential travelers.

To justify the bans, Trump cited concerns about foreign terrorist entry to the U.S. and American authorities’ ability to effectively screen visa applicants from terrorist exporting nations covered by the measure, such as Iran.

Breitbart News asked the U.S. State Department to respond to that criticism and what the Biden administration plans to do to screen people seeking to enter the U.S. from the countries included in Trump’s travel measure.

A spokesperson for State indicated that the U.S. vetting system is strong enough to compensate for the absence of verifiable background information from the banned countries referenced by the FBI director.

Without mentioning anything about cooperation from foreign countries, the spokesperson said the Biden administration would solely rely on U.S. government agencies to conduct the screenings.

The spokesperson acknowledged that the Biden administration might need to improve its vetting system to adapt to unforeseen threats. 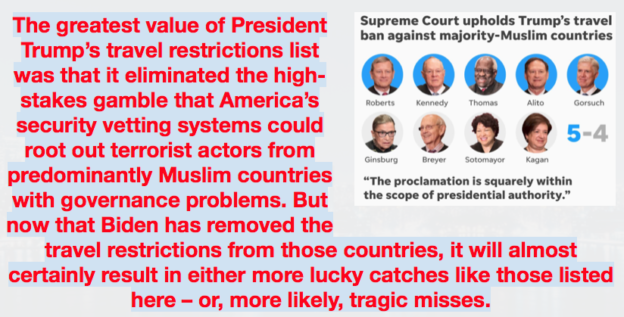 In June 2018, the Supreme Court upheld an updated version of Trump’s travel ban that restricted U.S. entry to many citizens from Iran, Libya, Somalia, Syria, Yemen, Venezuela, and North Korea.

Trump expanded the travel ban in early 2020 to restrict entry to some citizens of six additional countries— Burma, Eritrea, Kyrgyzstan, Nigeria, Tanzania, and Sudan for having “subpar passport technology” and a “failure to sufficiently exchange information on ‘terrorism suspects and criminals,” Al Jazeera reported. 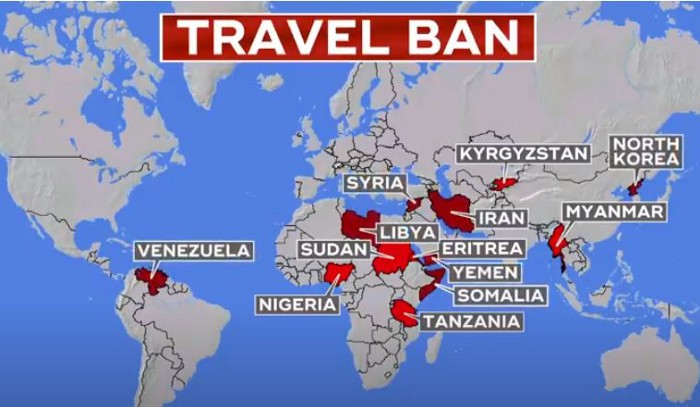 During a Senate Judiciary Committee hearing Tuesday, the FBI director agreed that the vetting of potential foreign terrorists seeking to enter the U.S. depends not only on America’s criminal and terrorism databases.

It relies “heavily” on foreign governments providing background information on the travelers’ identity, and criminal or terrorist ties.

And if designated terrorist group CAIR gets its way, legislation will ban any president in the future from ever enacting another Muslim terrorist travel ban.

Without cooperation from those governments, if a terrorist is not already in our own databases, we could “query our database until the cows come home, but there will be nothing to show up,” unless foreign governments work with us. Is that still the case?

“Certainly,” the FBI director responded. “We depend heavily on cooperation from foreign governments to make that kind of defense effective.”

Wray also agreed with Cotton that there is a lack of cooperation on potential migrants trying to enter the U.S. from some countries on Trump’s travel ban, namely Syria, Iran, Libya, Myanmar, Burma, North Korea.

Citing State figures, the Associated Press (AP) reported in January that more than 40,000 people, mostly Muslims,  were refused visas because of the ban.