A Syrian Muslim immigrant to the United States walked into a Jewish grocery store 25 miles away from his home in Boulder, Colorado, and shot up the place. Ten innocent people are dead. 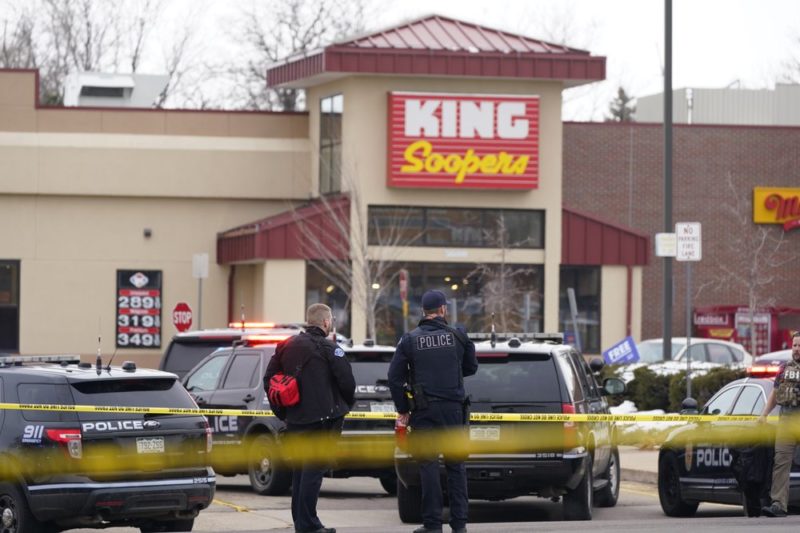 AndMagazine Boulder County District Attorney Michael Dougherty has said that investigators have not identified a motive for the suspect, who has been identified as Ahmad Al Aliwi Al-Issa, from the Denver suburb of Arvada.

And why have the far-left media been trying to de-Islamize his last name by spelling it “Alissa?” 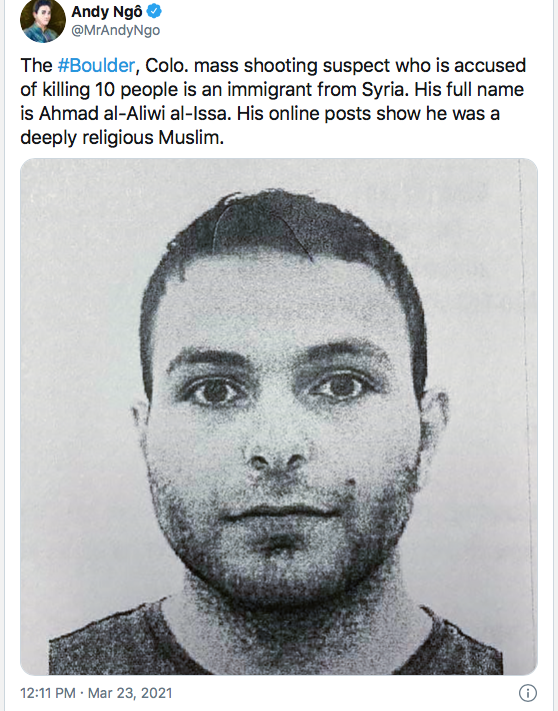 The store he drove 25 miles out of his way to shoot up was the King Soopers market, known to locals as a “Jewish” store with a majority Jewish clientele  because of its abundant supply of Kosher groceries.

The King Soopers website advertises the grocery chain as “Your One-Stop Shop For Kosher Groceries.” The store is also included on a Vaad Hakashrus of Denver list of stores that carry kosher items. 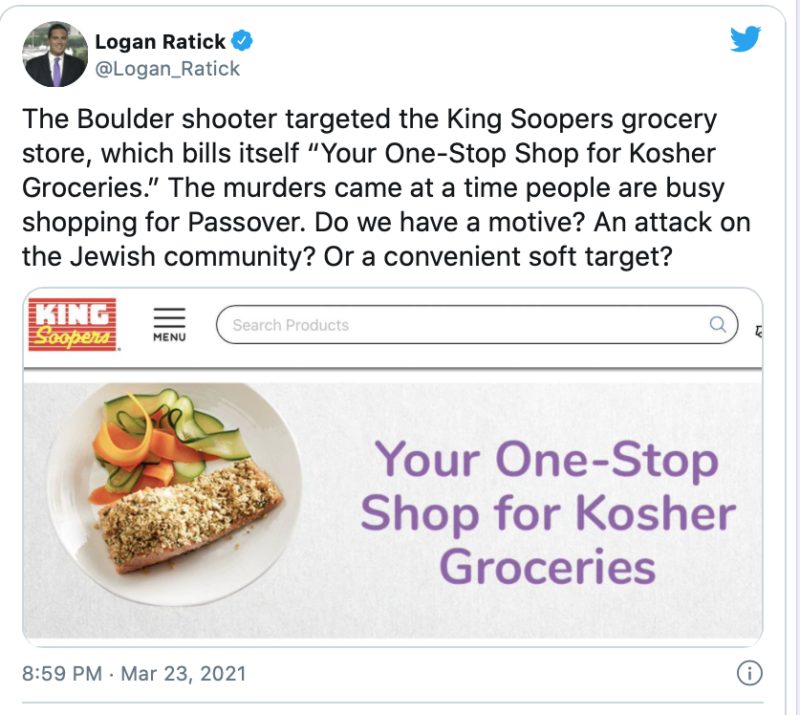 Ahmad Al Aliwi Al-Issa, is a Muslim and all ten victims were white, and likely many were Jewish. Alissa apparently has expressed pro-ISIS sympathies in the past.

Per Pete Williams of MSNBC, federal sources recently told him they see no evidence that the mass shooting was a terror attack or terrorism-related. The list of such statements is virtually endless. To the Times and most other corporate media outlets, it seems this is a mystery without any clues.

To ignore the salient facts in this case – and pretend we cannot see them – is political correctness gone mad. Are we to believe that Alissa wandered into a Jewish grocery in Boulder without any knowledge of the nature of the establishment? In a city of over 100,00 – which is part of the much larger Denver metropolitan area – Alissa randomly, with no knowledge of the target chose this one?

Any competent investigator looking at the facts of the case would begin his or her inquiry with the theory that Al-Issa walked into King Soopers because he expected it to be filled with the enemies of “his people” – Jews. Would that be the end of the inquiry? By no means, but no one with any common sense would ignore the obvious facts in front of them.

And, yet, we see the corporate media – which continues to peddle the fiction that it is out to find the truth – doing exactly that. There can be only one explanation for that – political correctness. If a man with a history of anti-gay comments walked into a gay nightclub and opened fire, the first headlines splashed across the Internet would concern homophobia and how it had led to violence. A white man with a history of racial slurs who opened fire in a black church would most certainly, and with complete justification, be considered to have likely committed a hate crime even before any other facts were known. 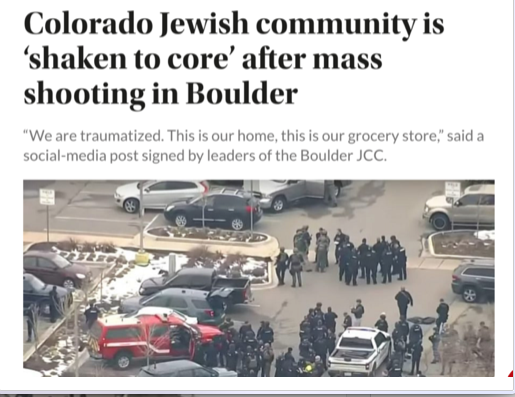 Not here. Not in the upside-down world of political correctness where it is demanded that you dispense with all logic and common sense and deny the obvious.

We are told endlessly by the self-declared guardians of truth and decency in the media that we must follow the facts, listen to reason and dispense with prejudice and bias. In reality, what is being imposed upon us is the exact opposite. We are now every day expected to self-censor, parrot the absurd and adhere to the dogma of the new religion of political correctness. 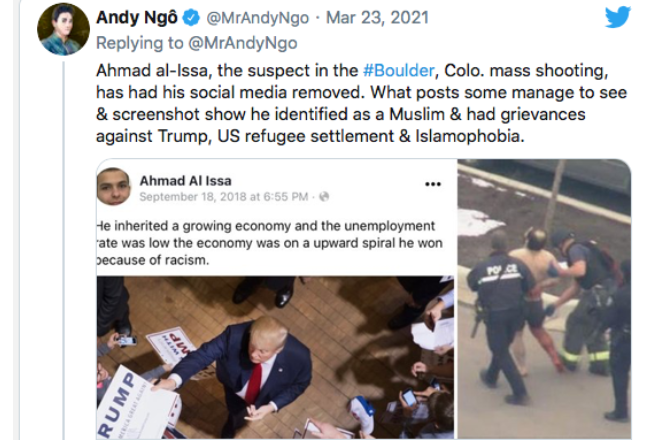 Screenshots of Al-Issa’s social media pages have also been obtained by The Post Millennial‘s Ian Miles Cheong, prior to the page being deleted. The screenshots show that Al-Issa was a practicing Muslim, aruging against Islamophobia and for increased acceptance of refugees. Al-Issa also shared anti-Trump content. 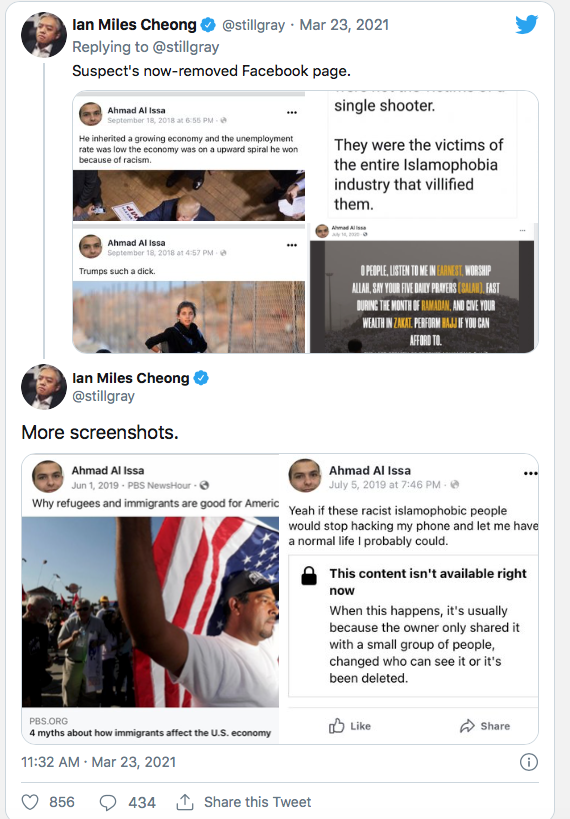