(Be sure to watch the second video after the first one below, where security footage seems to tell a different story than the one put out here by the Muslim drama queen and designated terrorist group CAIR)

OH, BOO HOO! (From 2019) Muslim woman is ‘horrified’ after she was asked to remove her Islamic supremacist headgear (hijab) at a Colorado center where her daughter was due to sing the National anthem with school choir. 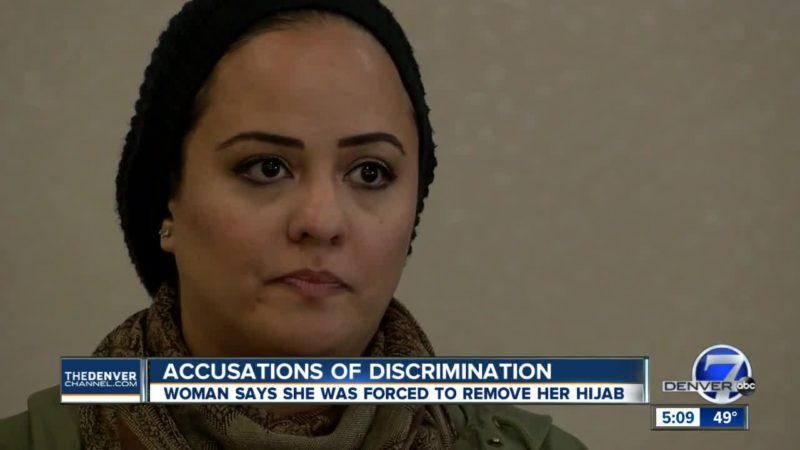 FOX13Now Gazella Benreiti says out of all the times she has visited the Pepsi Center, this one was different, claiming she was “subjected to public humiliation.”

“When I entered Will Call, the security person that was working immediately waved at me and told me that I had to ‘take that thing off’ of my head,” she said during a news conference outside the Colorado Muslim Society Wednesday morning. The “thing” the security person was referring to was Bensreiti’s hijab. 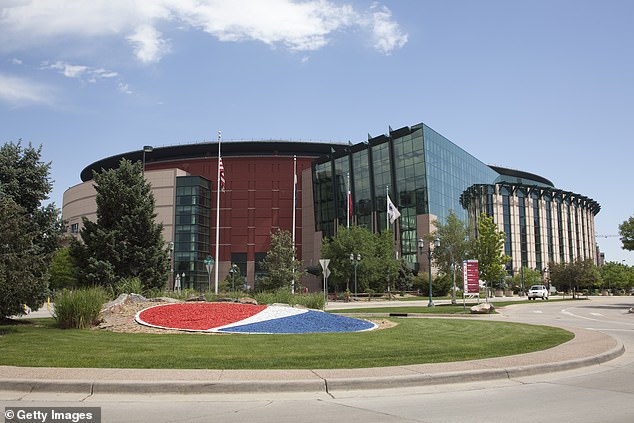 “I responded right away and told her that this was not just a head covering, it was for religious purposes, to which she responded that she didn’t care,” Bensreiti said.

Bensreiti was with her daughter, who was performing the National Anthem with her school choir for the Denver Nuggets game at the Pepsi Center when she was told she had to remove the Islamic headscarf.

She said she was willing to remove her hijab in a more private setting but was denied. She then asked to speak to a supervisor. “She then went and asked her supervisor and came back out and ushered me in without making eye contact,” Bensreiti said. 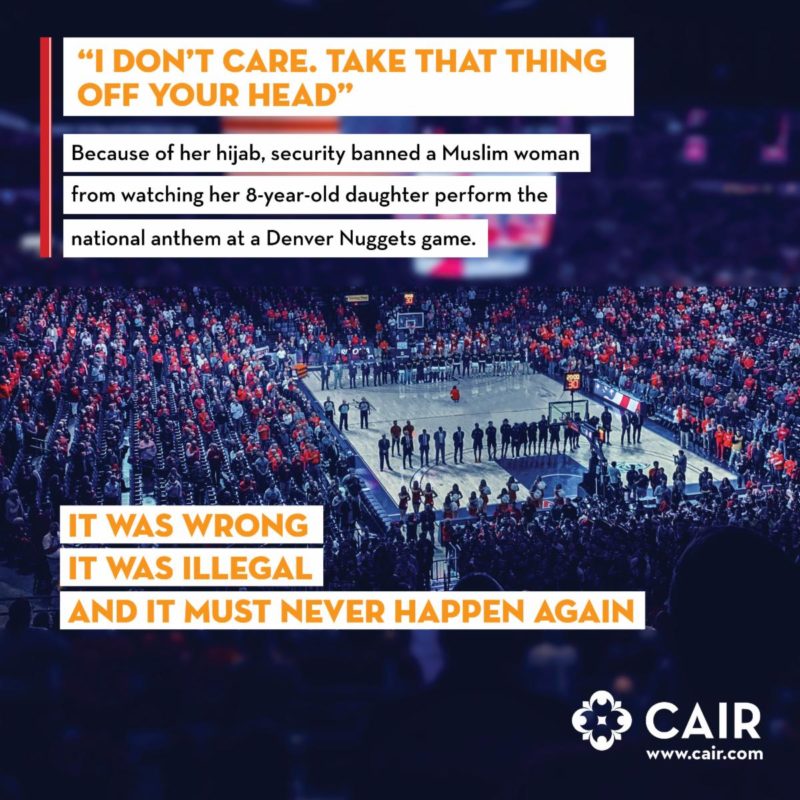 The Pepsi Center did not respond to a request for comment from reporters at Scripps station KMGH in Denver. But the arena sent KMGH’s news partners at the Denver Post a statement, saying in part,

For this reason, CAIR has demanded that management change its policies and employee training to ensure incidents like this never happen again. The Nuggets and their security guards must provide equal accommodation to all people, regardless of their faith.

“I do forgive the woman who did this to me because it came from a place of ignorance, but I implore her to educate herself and others like her to become educated on these things,” Bensreiti said.

And now, the rest of the story:

Westword There’s been an unexpected twist in the story of a metro Denver Muslim mom who says she faced “blatant racial profiling” after being stopped at a Pepsi Center entrance because of her hijab. Argus, the company that handles security for the Pepsi Center, is defending the actions of its employee and has released security footage of the incident.

Prior to a November 14 press conference about the incident called by the Council on American-Islamic Relations‘ Colorado branch, Kroenke Sports & Entertainment, the owner of the Pepsi Center (as well as the Nuggets), issued a release stressing that the “Pepsi Center prides itself on creating a safe and inclusive environment for all patrons regardless of race, gender, religion, national origin, disability and sexual orientation,” contending that the “security agent didn’t recognize that Ms. Bensreiti was wearing a hijab” and divulging that “we are taking steps to modify our screening process and provide additional education for our staff.”

The tone of Argus’s response is considerably different.

The Argus statement shared by president/CEO Dave Brower begins like so: “Argus is aware of a guest interaction with an Argus employee which took place on November 5th at the Pepsi Center. Argus would like to clarify the facts pertaining to the interaction. Our employee is a 71 year old African American woman who has worked for Argus for 14 years and until this incident never once had been accused of discrimination, profiling or harassment. The patron repeatedly pointed to our employee and another Argus colleague while calling them racists. Argus stands behind our employee.”

Brower continues: “Our employee was performing her job duties consistent with Pepsi Center and league security screening protocols. She did not recognize the headwear worn by the patron as a Hijab. Once notified by the patron of her religious headwear, our employee immediately sought guidance from her supervisor, who allowed the patron to enter without removal of her Hijab. Our security video verifies that this interaction took a total of one minute and 11 seconds.”

In his view, “there has been significant misinformation communicated about this event. To be clear, at no point was our employee motivated by religious or racial bias. She too has been traumatized by the interaction and has a 14 year employment history with Argus working multiple venues without a single patron complaint. It goes without saying, that Argus is committed to treating all guests equally regardless of race, religion, gender, national origin, or sexual orientation.”

He adds that “Argus has reached out to the guest to discuss the matter in greater detail, but she has not responded to our request.”

Bensreiti concluded her Facebook post about the incident by asserting that “I have never experienced this type of trauma in my entire life…. Not only did she traumatize me and my daughter, she infringed upon my civil rights.”

Gadeir Abbas, a CAIR attorney working with Bensreiti corresponding via email, reinforces this theme even as he takes on Argus’s defense.

“The fact that the employee who did this is a veteran security screener makes the incident even more concerning, rather than less,” he contends. “The NBA and Nuggets have a decision to make to either follow the law and implement policies that respect the rights and dignity of their fans that wear religious attire or to continue telling Muslims that they are not welcome.”

Abbas adds: “The idea that it’s okay to humiliate someone and treat them like a second class citizen as long as you do it quickly is shameful and deeply offensive to all Americans that value religious freedom.”

Here’s the video released by the company; Bensreiti can be seen arriving at the security station at around the 1:10 mark. It doesn’t include audio.