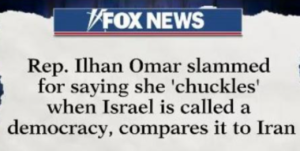 Breitbart (h/t nita)  Klein expressed his “deep concern” over an official HFA tweet that neglected to “mention Jews and anti-Semitism,” and instead merely recalled “six million (unidentified) lives” and “general forces” of prejudice and injustice, in addition to a “hateful, antisemitic” tweet by Omar which used Holocaust Remembrance Day to attack the Jewish state.

Klein, who was born in a displaced persons camp in Germany and is a child of Holocaust survivors, described the omission as both “incomprehensible and reprehensible.” “The Nazis and their collaborators murdered six million Jews,” he stressed, “including almost two million Jewish children.”

Klein also slammed Omar for an anti-Semitic personal tweet: ”It is deeply troubling that Congresswoman Ilhan Omar (D-MN) chose Holocaust Remembrance Day to issue another of her hateful, antisemitic and insensitive tweets.”

Klein wrote, as he elaborated:

In her Yom HaShoa Day tweet, antisemitic BDS-promoter Omar wrongly referred to the Jewish State as “wealthy,” condemned the military assistance that enables Israel to defend herself from Arab/Muslim terrorists, and even condemned Israel for expressing concern that the Biden administration is renewing sending hundreds of millions of dollars to UNRWA (whom Omar misleadingly referred to as “Palestinian refugees”). Israel-hater Omar ignored the fact that UNRWA, which will receive hundreds of millions of dollars of U.S. taxpayer funds, teaches Arab children to hate and commit violence against Jews and Israel, in their textbooks and schools. UNRWA also has operations with the murderous terrorist group Hamas.

Klein then referred to a “shocking” video posted by a Twitter user in reply to Omar’s tweet, showing Arab school children describing the lessons they learned from their UNRWA school education:

@IlhanMN Just tweeted in support Biden’s decision to send $150 million in “foreign aid” to UNRWA.
As you can see in this video Palestinian children in UNRWA schools are taught to kill Jews.
Ilhan Omar, Is this what you teach your children as well?
RT!pic.twitter.com/b45FeiGEcY

Klein also noted the Nazi collaboration with a Palestinian Muslim leader, the Mufti of Jerusalem.

“Hitler and his collaborator [Palestinian leader] Haj Amin Al Husseini also plotted to murder every Jew in the Middle East,” he wrote. “We must never forget those monstrous facts, painfully unique in human history.”