Yesterday, hundreds of Muslim migrants turned up to demonstrate against SIAN’s (Stop the Islamization of Norway) public speech at Strømsø Square in Drammen. Several people were arrested and the police eventually had to stop SIAN’s demonstration. 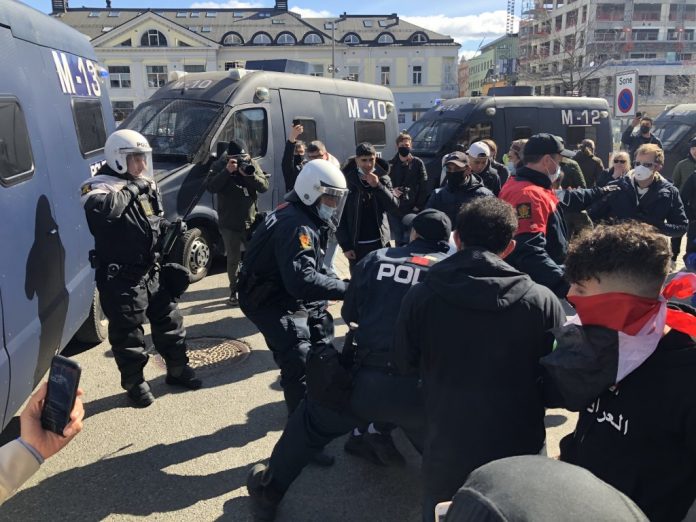 Resett  (h/t [email protected]) Shurika Hansen immigrated to Norway in 1996, and reacts to what she witnessed in Drammen:

“Our threshold for canceling a demonstration is very high. We chose to do so because it was necessary to ensure the safety of those involved and everyone nearby. I think many parents would have been shocked by the aggression that was expressed among many of those Muslims present, and how tense it was at Strømsø Square” local police chief Øyvind Aas for Drammen stated in a press release.

Stones, kilos of eggs, potatoes, clementines, light bulbs and bottles were thrown. Resett reported directly from the incidents and writes that young Muslims jumped up and down, tore attempted to breach the barricades and shouted “Allahu Akbar.” It took the police a long time to transport the SIAN personnel and their vehicles to safety. A crowd of young people tried to attack the prosession. Tear gas and pepper spray were used along the way by the police.

Shurika Hansen was in Drammen for Resett, and livestreamed the demonstration directly to Resett’s Facebook page with thousands of live viewers. She was in the middle of the incident and talked to the Muslim protesters along the way.

“I saw older Muslims say that they should buy eggs and give them to the younger people to throw [at SIAN members],” she says.

Shurika Hansen published the book Min Kamp for Frihet (My Fight for Freedom) October last year. In it, she described, among other things, growing up in a Muslim immigrant environment in Skien and her own experiences from Koran school in Norway.

“We are so indoctrinated to love the Prophet Muhammad that it physically hurts young people when they hear something ugly being said about him,” Shurika says to Resett, and adds that “this type of riot and violence has a clear connection with culture and upbringing in Muslim immigrant communities in Norway.”

“What we saw in Drammen should open everyone’s eyes to the fact that we have an integration problem. The situation was completely out of control. Several of those I observed had neither respect for the police nor any understanding of freedom of expression here in Norway,” she says.

She further explains that she feels ashamed on behalf of Muslim immigrants who have been welcomed with open arms in Norway and given a stay here.

“What we saw in Drammen gives SIAN exactly the arguments they need in their critique of Islam,” she says. “The counter-demonstrations give us immigrants a bad reputation. Drammen has a huge job (problem) to do with getting parts of the immigrant population in the city to understand which country they have come to and what is expected of them here.”

She adds that some immigrants did their best to calm the mood, but that they were swept aside. On Facebook, she writes the following, illustrated by the picture of a Norwegian flag that was burned by counter-protesters: 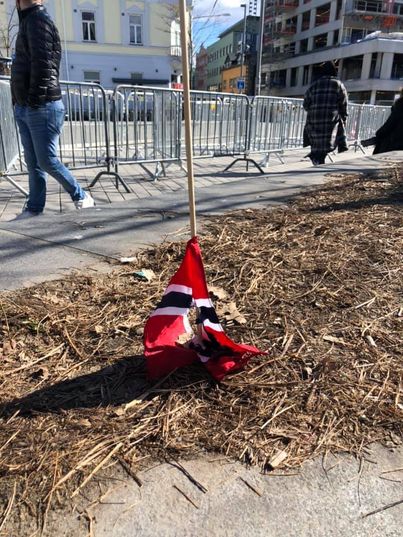 “A big fuck you to the Norwegian flag and western values, including freedom of expression today. Drammen showed what challenges we face. Violence, smashing of other people’s property, throwing stones at the police, use of tear gas, fights and arrests were just some of the events of the day. Seeing the flag like this was still the strongest thing I experienced today. This is Norway in 2021…”

Her post quickly received many reactions and comments. “I’m completely shocked! The conditions during and after the demonstration [by SIAN] that happened shown in Drammen tell me that some cities in Norway are facing complete collapse and their own no go zones,” one writes.

“A sad day for Norway and Drammen. The only positive is that the immigrants (followers of the Islam-ideology, ed.) themselves have shed light on their actual beliefs through their behavior,” writes another.

In August 2020, clashes broke out at an anti-Islam rally in the Norwegian capital of Oslo. The situation came to a head when a female member of SIAN ripped pages from the Quran and spat on them.