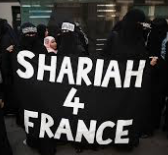 Some even buy into the propaganda that wearing an Islamic supremacist hijab is “empowering” for women. And this is in spite of the fact that President Macron has banned the wearing of hijabs by girls under 18 and has instituted policies designed to end ‘Islamic separatism’ where Muslims refuse to integrate into French society and instead live parallel lives in the notorious Muslim ‘No-Go’ Zones.