The Dessau-Rosslau Police Inspectorate in the German state of Saxony-Anhalt has been accused of harassing 56-year-old Karsten Hempel, whose 30-year-old son Marcus Hempel was killed by a Syrian asylum seeker in 2017, by insinuating he was planning revenge against the 21-year-old migrant, after he received a reprehensible non-sentence of “probation.” 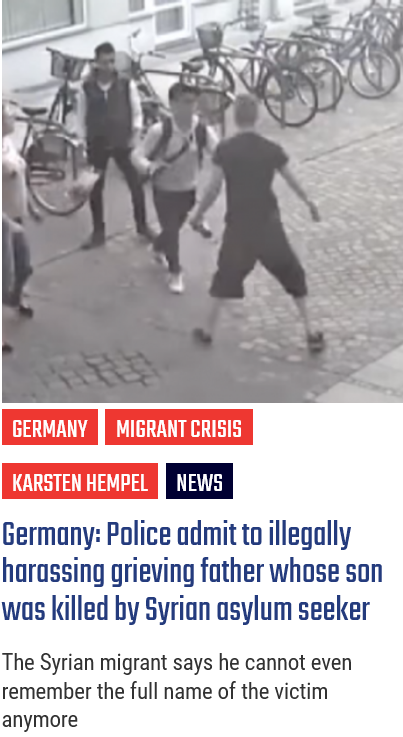 Breitbart According to a report from German magazine Focus, police arrived at the workplace of Mr Hempel, who is employed in the construction sector as a manager, in December of last year and gave him a “Gefährderansprache” danger notice, a verbal warning given to people police suspect may be a danger to others.

The visit had come after Hempel had won compensation of around €25,000 (£21,700/$29,900) from Syrian Sabri H. in a civil court. The migrant, who allegedly was 17* when he killed Marcus, had been convicted of “bodily harm resulting in death” rather than murder or manslaughter and was only sentenced to probation.

*17 –  The court’s own report indicated that Sabri could have been anywhere between 13 and 27 at the time of the killing, but they never bothered to ask Interpol to confirm his age medically. Nor did the court ever attempt to determine if there was a motive for the killing.

Mr Hempel was not initially able to obtain the compensation, despite attempts by a bailiff to do so, as the migrant claimed he had no money or valuables to seize. He also noted that he had been living at a friend’s house — a violation of his probation order.

According to Focus, the investigation and complaints lodged by Hempel had “disturbed” the Syrian and, shortly afterwards, police had received a report that Hempel wanted to take revenge on his son’s killer.

Following the danger notice given at his work, Hempel took legal action against the police for “false suspicion, defamation, and feigning a criminal offence”. In March, the police admitted that their actions against him had been unlawful.

Breitbart  His son, 30-year-old Marcus Hempel, was killed in 2017 in Wittenberg after being beaten by two Syrian asylum seekers. According to Karsten, the public prosecutor’s office claimed that the Syrian had killed his son in self-defence and suspected his son of starting the confrontation with xenophobic rhetoric.

The video of the assault is shown in the Einprozent film and shows Marcus walk past the group of Syrians who seem to say something to him as he walks into a shopping centre. Marcus turns around with his female friend to confront them, is pushed, and slaps one of the Syrians who then repeatedly punches Marcus who fell. He later died of his injuries.

The video contradicted the prosecution’s statement which claimed Marcus had been punched once — not three times — and that Marcus had been the first to engage physically. 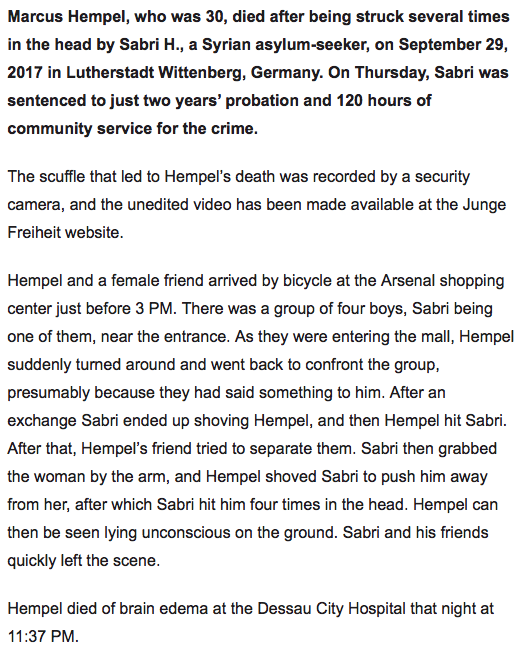 A year after the death of his son, far-left extremists heckled and harassed Mr Hempel as being a “Nazi” for speaking out about the killing at a demonstration in Schweinfurt that took place after the murder of a 15-year-old girl by another Muslim asylum seeker in the town of Kandel.

The killing of Hempel’s son is just one of the many killings and murders of Germans, often young women and girls, by migrants and asylum seekers since the height of the migrant crisis in 2015. In 2019, a report indicated that Germans were far more likely to be victims of crimes perpetrated by migrants than the other way around.