The violent attack took place on La Cienega and Beverly, known as a heavily Jewish area of the city. At least of one the 5 victims is reported to have been hospitalized.

KTLA (h/t Gila & Nita) An attack on Jewish diners outside a Beverly Grove restaurant by members of a pro-Palestinian caravan Tuesday night is being investigated by police as a possible hate crime.  The incident was captured on video and shared with KTLA by a viewer who wished to remain anonymous.

A witness to the incident said she was sitting with a group of friends when people in a caravan of vehicles displaying Palestinian flags drove by and began shouting at diners.

The witness said that at one point a group of men jumped out of their vehicles and asked some men if any of them were “Jews.” The fighting broke out when two men replied that they were, according to the witness. Video shows punches and items being thrown between a large group of men on a sidewalk as customers looked on. 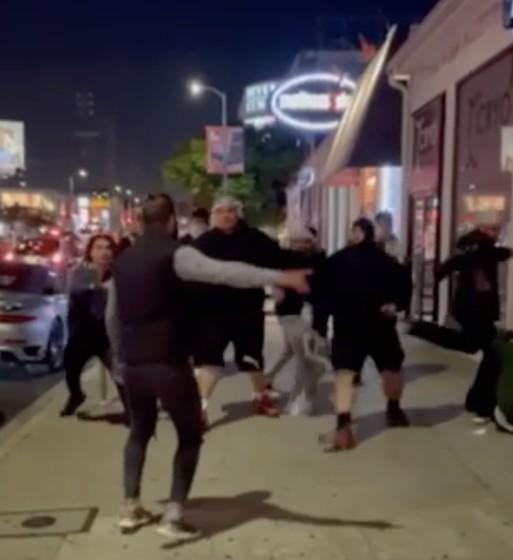 LA TIMES  The video that captured part of the attack shows several Arab Muslims in a caravan of cars with Palestinian flags yelling F*ck you” and “You guys should be ashamed of yourselves” as they drove by the restaurant.

Later, the video showed a group of about eight people, most dressed in all black, descending on sidewalk diners. At one point, a person can be heard yelling, “Israel kills children!”

The fight grew increasingly violent as it spilled further onto the sidewalk. One man swung a metal stanchion at the attackers, who then pushed him against a car, punched and kicked him, the video shows.

A witness told The Times that a caravan of cars waving Palestinian flags drove by the restaurant, Sushi Fumi, on La Cienega Boulevard. People from the caravan began throwing bottles and other items at the diners.

“They were chanting ‘Death to Jews’ and ‘Free Palestine,’” said the witness, who asked to remain anonymous because he feared for his safety. “They had malice.”

FORWARD  An eyewitness to the attack, Natalie Schneider, who was dining at the restaurant said, “Those people know who lives in this area, that there is a big Jewish community, that’s why they arrived here, they were looking for Jews to attack. They were demanding to know who is Jewish and were very aggressive. I’m still shaken by what had happened.”

Schneider said the attack, “was worse than what the clip is showing. You can’t hear the profanity and anti-Semitic slurs they were using. Here were guys who were minding their own business, not bothering anyone, and they were attacked just for being Jewish. I am disgusted. I’ve lived in L.A. all my life and never encountered anything like this. I’m now fearful to identify myself as a Jew. I can’t believe this is happening here, I don’t feel safe anymore.”

Mher, a photographer was sitting with his friends for dinner when they were startled by glass bottles that were thrown at them. Shortly after he found himself fighting a group of men who attacked him and four other diners, all of whom are Jewish except for him.

In an interview the morning after the attack, Mher, who refused to give his last name for fear of retribution, told The Forward what made him intervene on behalf of the Jewish diners.

“I’m Armenian and was born in Beirut,” he said. “Many of my friends and clients are Jewish, including those I was meeting to talk about their wedding. We were having a quiet dinner when all of the sudden those men were throwing glass bottles at us. They were pro-Palestinian supporters. I immediately got up and saw two men running toward me. I started talking to them in Arabic, trying to calm them down, they stopped, probably surprised. Then, 15 more men started running toward us. They knocked down my Jewish friend to the ground and were kicking his head, I tried to push them off him and one of them punched me in the face. This all happened before someone started videotaping the incident.”

In another incident on Tuesday night, Sherman Oaks Kosher restaurant Orange Delite & Grill was vandalized. The night before, on Monday, an Orthodox man was chased by a caravan of people. A security video showed the man being chased by a few cars with Palestinian flags. He was able to reach safety.

The LAPD is investigating the incidents as hate crimes. There are no suspects or arrests yet. Earlier on Tuesday, there was a pro-Palestinian rally outside the Israeli consulate in West L.A for the second week in a row.