Not one mention of the fact that Hamas launched hundreds rockets into Israeli civilian areas before Israel even had a chance to strike back. No wonder designated terrorist group CAIR featured this video on their website.

MOHAMAD FATTOUH featured in the above video: 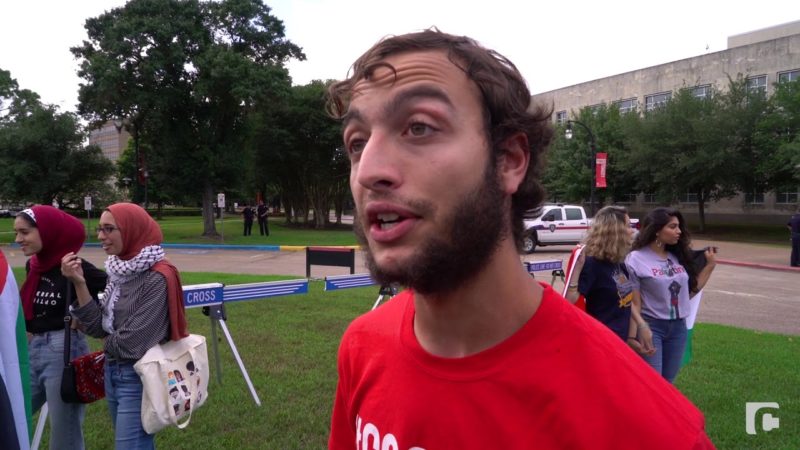 Mohamad Fattouh has used “Jew” as an insult, expressed support for terrorists, led a disruption a campus event and defended terror financiers. He also demonized Israel, glorified the violent March of Return and promoted anti-Israel agitators.

Fattouh was the 2017-2018 secondary student officer for Students for Justice in Palestine (SJP) at the University of Houston (UH).

Fattouh was a member of the Muslim Students Association (MSA) at UH (UH MSA). He attended the 11th Annual American Muslims for Palestine (AMP) 2018 Conference.

On May 24, 2017, Fattouh promoted on Facebook an SJP UH-organized event titled: “Houston Stands with Palestinian Prisoners on Hunger Strike” and used the hashtag “#DignityStrike.”

The phrase “Dignity Strike” referred to a hunger strike initiated on April 16, 2017, by Marwan Barghouti — who financed the guitar-case bomb used in the Sbarro Cafe bombing.

Barghouti was sentenced to five consecutive life terms by an Israeli civilian court for some of his crimes. While in Israeli prison, Barghouti completed his doctorate in Political Science.

On May 22, 2018, SJP UH disrupted a speech given by then-U.S. Ambassador to the United Nations, Nikki Haley.

Mid-speech, Fattouh stood up and shouted [00:00:11] “Nikki Haley! The blood is on your hands! You continue to sign off on the genocide of a native people! You are an accomplice to terrorists and colonizers.”

On November 25, 2018, Fattouh shared a link on Facebook to the Palestinian Youth Movement (PYM)’s call to action to free the Holy Land 5.

The HLF5 were five individuals associated with the Holy Land Foundation for Relief and Development (HLF) indicted for funnelling funds to Hamas in the guise of humanitarian aid. The men were were all convicted and sentenced in 2009 to federal prison terms ranging from 15 to 65 years.

On May 14, 2018, Fattouh tweeted: “Israel comes out of the systemic destruction of over 500 Palestinian villages, massacre & rape of hundreds, and forced removal of over 750,000 Palestinians all on the quest to create an exclusively white Jewish state. Whitewashed as a ‘war of independence.’”

On August 26, 2017, Fattouh shared a video on Facebook of an interview with journalist Abby Martin. Martin propagated [00:02:14] multiple libels and false allegations about Israel (these were later debunked in a video by Chloe Carson from the Israel Advocacy Movement).

On April 20, 2016, Fattouh posted a photo to Facebook of himself and other activists, one of whom held a sign likening late Israeli Prime Minister Ariel Sharon to Adolf Hitler. The sign read: “What’s the difference between Hitler and Sharon? About 60 years!”

On September 23, 2018, Fattouh shared a video on Facebook that glorified the March of Return. The video description said Palestinians “braved sniper fire for the freedom to return to their homes.”

In May 2018, violent riots, instigated by Hamas on the Israeli-Gaza border, saw thousands of rioters attempting numerous breaches of Israel’s border fence, with participants declaring their intention to harm Jews across the border under the pretext of “peaceful resistance.”

On May 15, 2018, Fattouh promoted the protest on Facebook, calling Israel a “terrorist apartheid state” and said: “Come out to make your voices heard.”

Media reports confirmed [00:00:20] the March of Return protesters’ breached and attemptedbreaches of Israel’s border fence, some by armed Palestinians. One Hamas leader declared[00:00:30]: “We will take down the border [with Israel] and we will tear out their hearts from their bodies.”