An explosion and fire were reported at the Zarand Iranian Steel Company in eastern Iran on Saturday night, in the latest in a series of similar incidents throughout Iran, according to Iranian media. 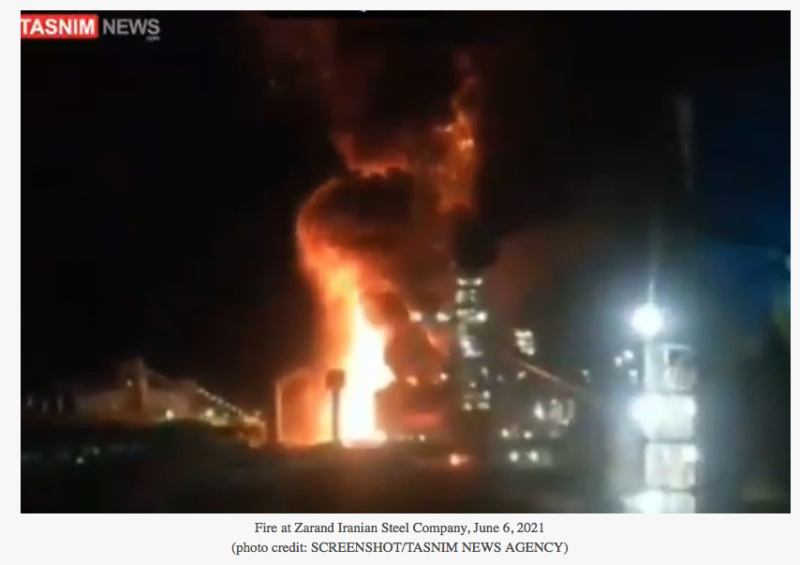 JPost (h/t Nita)  Video reportedly from the scene showed a large blaze with what appeared to be an explosion launching debris into the air. The Iranian IRNA news reported that a large explosion occurred during the incident.

The governor of Zarand told the Iranian Fars News Agency that no injuries were caused in the incident and that the incident was under control. The incident was reportedly caused by the sudden overflow of molten material in the blast furnace, with the governor stressing that no explosion occurred.

The Zarand Iranian Steel Company is part of Middle East Mines and Mineral Industries Development Holding Company (MIDHCO), which was placed under sanctions by the Trump administration earlier this year.

“The Iranian metals sector is an important revenue source for the Iranian regime, generating wealth for its corrupt leaders and financing a range of nefarious activities, including the proliferation of weapons of mass destruction and their means of delivery, support for foreign terrorist groups, and a variety of human rights abuses, at home and abroad,” said the US Department of the Treasury at the time.

The fire at the steel plant is the latest in a series of similar incidents that have plagued Iran in recent weeks:

Last week, Iran’s largest naval ship, the Kharg training support vessel, sank recently after it was destroyed in a fire. It is unclear what caused the fire.

Additionally, a massive fire was reported at an oil refinery in the southern part of Tehran last week, with no casualties reported in the incident.

Additional fires have been reported at a number of petrochemical plants throughout Iran in recent weeks.

At least one fire has been associated with an Iranian military site, with The Guardian reporting that a blast hit the Iran Aircraft Manufacturing Industrial Company (HESA), which produces a variety of aircraft, including drones, for Iranian and pro-Iranian forces in Iran’s Isfahan Province.

Last year, a series of explosions and fires hit industrial sites across Iran, including a number of petrochemical plants. Iranian officials referred to most of the cases as incidents or accidents, although some reports have claimed that at least some of them involved foul play.

OTHER RECENT EXPLOSIVE INCIDENTS IN IRAN:

JUNE 2nd: YET ANOTHER unexplained massive fire breaks out at oil refinery near Iran’s capital

MAY 26th: THIRD ONE IN 4 DAYS! Yet another major explosion at an Iranian petrochemical plant, this time in Bushehr Province

MAY 23rd: Hmmmm…I wonder what could have caused the huge blast at an Iranian explosives factory that was used to manufacture weaponized drones like the one downed by Israel this past week?

MAY 25th: GEE, there has been another major explosion in Iran…just a few days after a big drone factory mysteriously went up in flames