Hamas’ claim that it “won” the recent war with Israel has become the subject of ridicule and mockery by many Arabs who are not afraid to call out the Iranian-backed terrorist group for lying to the Palestinians and the rest of the world. 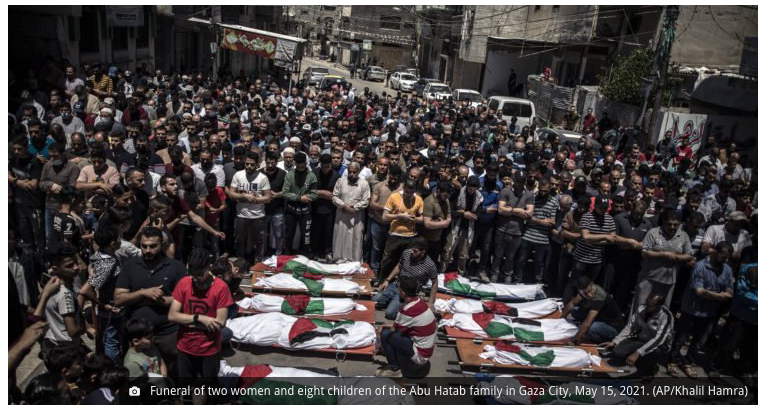 World Israel News The Arabs are also not afraid to hold Hamas responsible for the massive destruction and the loss of the lives of innocent Palestinians and Israelis in order to serve the interests of its masters in Iran.

Prominent Arab journalist Amjad Taha, an expert on international affairs and a popular commentator on the media and social media networks in the Gulf, burst into laughter when asked during a TV interview if he thought Hamas had scored a “victory” against Israel.

Taha pointed out that some of the Palestinians killed during the 11-day war were victims of Hamas rockets: “Out of 3,700 rockets fired by Hamas [into Israel], 400 rockets fell on residential areas in the Gaza Strip and killed women and children.”

“How strange. We live in an era where defeat has become victory. Bon appetite to [Qatar-based Hamas leader] Ismail Haniyeh for the Mercedes car, the Rolex watch and the Armani suit. Bon appetite to Hamas for trafficking in the blood of innocent Palestinians. As usual, Haniyeh won, the people lost.”

Echoing the widespread belief in the Arab world that Iran was using its Palestinian proxies, Hamas and Palestinian Islamic Jihad, to extract concessions from the U.S. and other world powers at the Vienna negotiations to revive the 2005 Iran nuclear deal, Taha added:

Emirati journalist and writer Mohamed Taqi was even more blunt in his criticism of Hamas’s alleged victory and its alliance with Iran.

Like many Arabs, Taqi denounced the Hamas leaders for living in luxury in Qatar and Turkey while sacrificing their own people in the Gaza Strip to appease Iran. 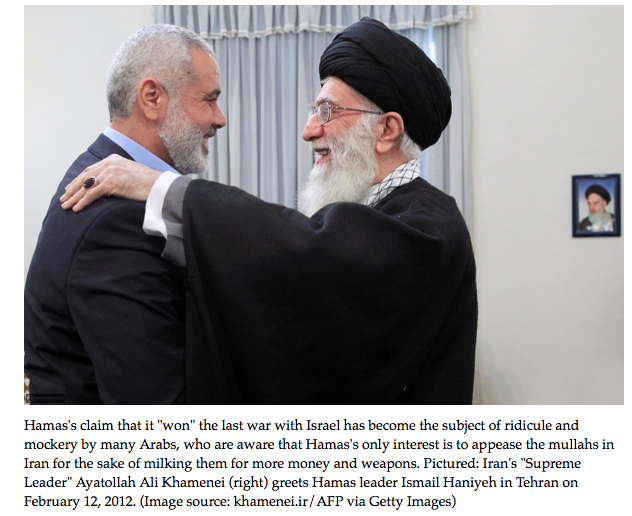 Hamas, Al-Kahel wrote, “does not want the Israeli-Palestinian conflict to end because it wants to achieve political and financial gains. Hamas has turned the Palestinian issue into a commercial asset that generates funds from various sources and ensures prosperity and wealth for its leaders.”

Al-Kahel, too, shares the view that Iran is using its Palestinian allies’ campaign of terrorism against Israel to get the US to lift the sanctions on Iran.

“Therefore, whatever the outcome of the armed confrontation with Israel, Hamas will not declare its defeat. Rather, it will make it a victory, even if it celebrates it among the ruins and coffins. The more killing and destruction, the more Hamas’s income increases while the Palestinians continue to suffer from siege and poverty.

What is worse is that political Islamic organizations are proud of the illusory victory achieved by Hamas. None of these organizations asked about the nature of this victory and its gains for the benefit of the Palestinians and their cause: how much land was liberated, how many prisoners were released, and how many [Palestinian] refugees returned? None of this has been achieved, and will not be achieved as long as Hamas controls the Palestinian decision-making process.

Samir Ghattas, a former Egyptian parliament member and head of the Egyptian Middle East Forum for Strategic Studies, also warned against Iran’s attempt to use Hamas to obtain gains from the US and other world powers during the Vienna negotiations.

“Tehran has not contributed or made donations for humanitarian or reconstruction projects in Gaza, but rather contributed to financing the purchase of weapons and others in order to turn Gaza into a weapon center that threatens the security of the region. The recent Gaza war and the similar wars that preceded it in 2008, 2012 and 2014 were just opportunities that Iran exploited politically and militarily for its own interests only, not for the interest of the people of Palestine and Gaza, but at the expense of their blood.”

Saudi political analyst Abdul Rahman Altrairi also scoffed at Hamas’s claim that it won the war. Altrairi reminded those Westerners who are working hard to appease Iran that the Iranians are responsible for “destruction and corruption” in Iraq, Lebanon, Syria and Yemen.

Altrairi warned the West that one of Iran’s goals during the Gaza war was to destroy the peace treaties between Israel and some Arab countries and “reposition Israel as an enemy of the Arabs.”