On Sunday evening, police said a pickup truck, driven by a 20-year-old London man, mounted a curb, and struck the Pakistani Muslim family of five as they were out for an evening walk, and then drove away. 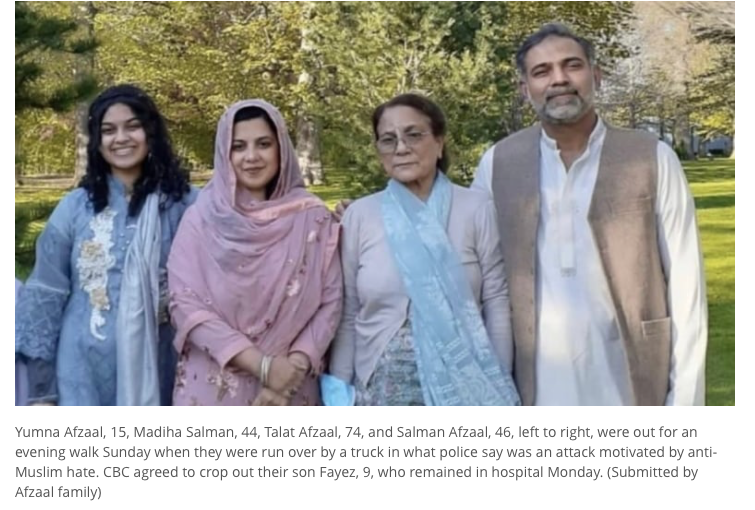 Twin Cities Salman Afzaal, 46, his wife Madiha Salman, 44, their 15-year-old daughter Yumna Afzaal and Salman Afzaal’s 74-year-old mother, Talat Afzaal, were killed after a black truck slammed into them as they took an evening walk. The couple’s nine-year-old son Fayez was seriously injured but is expected to survive.

Police say the driver of the truck, who was arrested about 10 minutes from the scene the same evening, planned the attack and targeted the family because of their Muslim faith. Nathaniel Veltman, 20, of London faces four charges of first-degree murder and one count of attempted murder.

“This was a terrorist attack, motivated by hatred, in the heart of one of our communities,” Prime Minister Justin Trudeau told Parliament. “If anyone thinks racism and hatred don’t exist in this country, I want to say this: How do we explain such violence to a child in a hospital? How can we look families in the eye and say “Islamophobia isn’t real”?

This killing was no accident. … Canadians are outraged by what happened on Sunday. And many Muslim Canadians are scared.” Trudeau said words matter and in part blamed rhetoric, disinformation and extremism online and in politics.

But of course, Trudeau will not mention all vehicle jihad attacks that Muslims have carried out in Canada, America, and of course, Europe. Not that all those attacks justify what happened to this family, but perhaps it will make Muslims think about their own role in this tragic event.

NOTE to BNI Commenters: Please choose your words wisely here or they won’t be posted.