SIGN THE PETITION TO REMOVE SECRETARY OF DEFENSE AUSTIN NOW!

FRONTPAGE MAGAZINE – David Horowitz (h/t RF) No institution in America – from government offices to schoolrooms to corporate boardrooms and beyond – is safe today from the divisive racism of Critical Race Theory and the “1619 Project.” both of which posit that United States history is rooted in slavery and white supremacy, and that “whiteness” is an incurable disease. The institution whose subversion poses the greatest threat to our national security is the U.S. military, whose head is Defense Secretary Lloyd Austin. General Austin is a determined advocate of these repulsive anti-American views.

As Secretary of Defense, Lloyd Austin has incorporated both Critical Race Theory and the 1619 Project as core elements of the Pentagon’s military training programs, under the guise of “Diversity, Equity and Inclusion.” He has further ordered a purging of the military ranks of what he calls “extremists,” defined as opponents of these noxious views and supporters of former president Donald Trump.

The consequence of dividing our troops by race and gender, and regarding one community of Americans as oppressors and beneficiaries of race and gender-based privileges is a direct threat to unit cohesion and military morale, the core elements of an effective military force.

On April 9, 2021, Secretary Austin issued a memorandum announcing the establishment of the Countering Extremism Working Group (CEWG) to spearhead the military’s internal witch-hunt of “extremism” in the ranks.

Secretary Austin claims his planned purge “is not about politics or political views.” Yet, nearly all 18 members of the Combatting Extremism Working Group in charge of the purge supported Joe Biden and the Democrats in the 2020 elections. Six of them are radical Islamists including a Pakistani national, who is not even a citizen. This is hardly surprising since in his first days as Secretary of Defense Austin ordered hundreds of former President Trump’s appointees from at least 31 Pentagon advisory boards and panels, to resign.

To guide his political purge, Austin has recruited the Southern Poverty Law Center, a notorious, fact-challenged smear operation which has routinely labeled conservative organizations and individuals like the American Enterprise Institute and Trump HUD Secretary Ben Carson as “hate mongers.”

In a world as dangerous as ours where our chief adversary China is openly and aggressively building what it hopes will be the most dominant military force in the world, having a divisive, morale-sapping, politically partisan Secretary of Defense in charge of the nation’s defenses is a itself a threat to national security.

To lead the CEWG, Austin appointed as his senior adviser, a black American named Bishop Garrison, who has made no secret of his profound contempt for former President Trump and the millions of people who voted for him. In July 2019, for example, Garrison wrote: “Support for him [Trump], a racist, is support for ALL his beliefs. He’s dragging a lot of bad actors (misogynist, extremists, other racists) out into the light, normalizing their actions. If you support the President, you support that.”

On May 10, 2021, Lt. Col. Matthew Lohmeier, a commanding officer with the U.S. Space Force, released a self-published book titled Irresistible Revolution: Marxism’s Goal of Conquest & the Unmaking of the American Military. “As a commander of young military professionals, all of whom have taken an oath to support and defend the Constitution,” wrote Lohmeier, “I became concerned that race-based identity politics would erode the trust and confidence these young people have in their country and in the Constitution.” I

n his book Lohmeier recounts stories of white officers who left the military because they grew tired of being told that “they are racists solely based on the color of their skin.” He describes high-school students reluctant to join the armed services because “they are unsure what their country stands for anymore.” And he cites black West Point cadets who, as a result of the Marxist propaganda with which they have been indoctrinated, are “conflicted about swearing an oath to defend a white supremacist country.”

For expressing his concerns, Lohnmeier was fired from his command and removed from his Space Force unit, whose task is the tracking of ballistic missile launches. 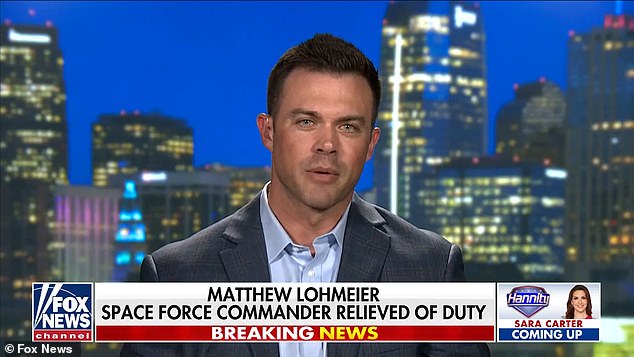 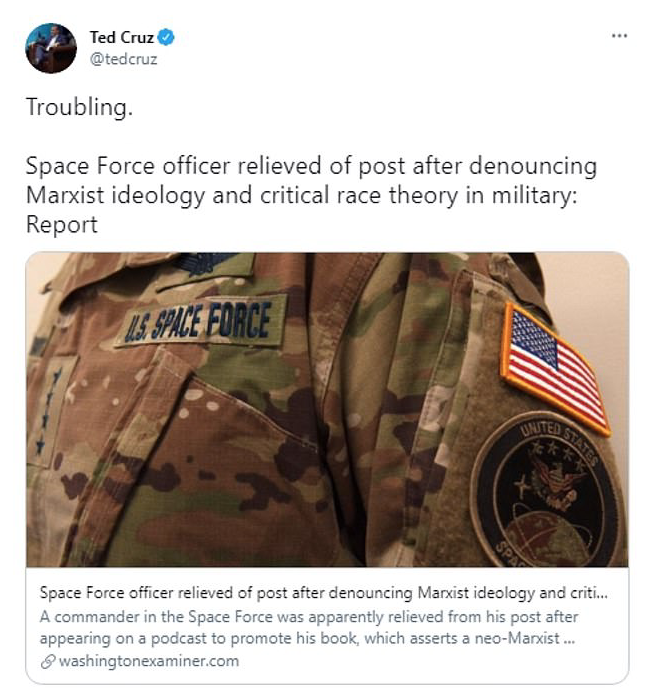 SIGN THE PETITION TO REMOVE SECRETARY OF DEFENSE AUSTIN NOW!

ALSO SEE: SHOCKING! Anti-America indoctrination and Critical Race Theory trainings in the U.S. Military not only are upsetting service members, they are causing them to leave in growing numbers