Fairfax County School System’s one Muslim board member, Abrar Omeish, addressed the graduating class at Justice High School in Virginia on June 7th. In English, she told the graduating students: ‘The world sees the accolade, the diploma, the fruit of all your years yet be reminded of the detail of your struggle.’ But when she repeated the speech in Arabic, she told students to “remember their jihad”– a word meaning both ‘struggle’ but more commonly, ‘a holy war waged on behalf of Islam.’ 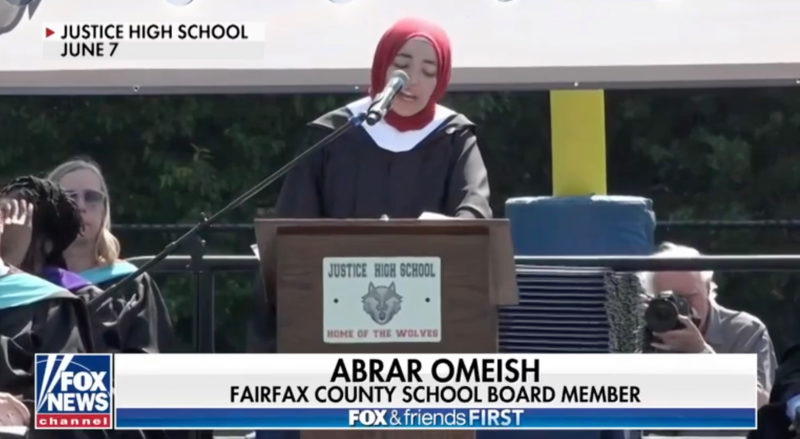 Daily Mail (h/t Thereza B) Furious parents have spoken out against a school board member who told graduating high school students to remember ‘jihad’ as they ‘entered a world of white supremacy’.

Asra Nomani, a Muslim mom (and co-founder of the Muslim Reform movement is often condemned by her fellow Muslims for her anti-political Islam views) in the district, said the speech by Fairfax County School Board member, Abrar Omeish, was a ‘wake up call.’ Political Islam has joined with radical left to hijack our schools,’ she told Fox & Friends on Tuesday.

Nomani, and many other parents, spoke out after the comments by Omeish, the sole Muslim school board member, at the graduation event at Justice High School on June 7. ‘It was just really depressing,’ Nomani said of the speech.  Nomani, former WSJ columnist, slammed the speech as ‘indicative of radicalization’ at ‘school boards and school districts and schools across the country, from principals to teachers to political operatives like [Omeish].’

‘The script was written years ago,’ Nomani added. ‘Omeish, I know her very well, I’m also a Muslim … her father and the elders of the community that brought her to office are part of this network of political Islam in America that has joined together with the far left in order to create a trojan horse … to basically hijack our schools with their radical ideology.

‘It’s something parents in Fairfax County, Virginia are very alarmed about … this is a wake-up call to everyone across the country that they’ve got to be vigilant in our school districts,’ Nomani concluded.

Author and the Muslim Reform Movement Co-Founder, Asra Nomani, on why the leftist media and Muslim extremists are creating anti-American hysteria.

Another dad of a Fairfax student branded Omeish’s statement as ‘incendiary.’ ‘I think it’s important for your viewers to know that Abrar Omeish’s comments here are incendiary comments, are not the first example of divisive and anti-Semitic rhetoric,’ parent Gary Aiken said on Fox & Friends (video below).

Aiken went on to claim that Omeish had posted anti-Semitic tweets on her social media pages. He also claimed that it was ‘absurd’ to think that Omeish didn’t represent the school while making her comments and that nobody proofed her speech.

She also sparked controversy recently for her tweet attacking Israel: 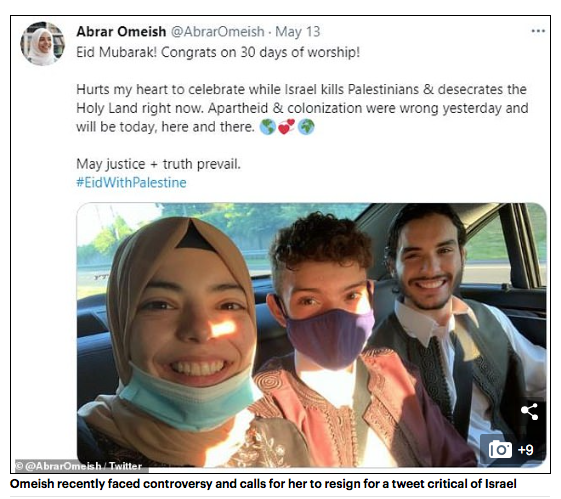 Her Libya-born father Esam Omeish, a surgeon, was forced to resign from the Virginia Commission on Immigration in 2007 when video emerged from the year before, showing him condemning Israel and advocating ‘the jihad way.’

His daughter, who was previously called to resign for an anti-Israel tweet, said the school was her father’s alma mater, and told the graduating class that they were entering a world ruled by white supremacy and capitalism.