With the help of the French left-wing Greens Party, a controversial extremist Turkish mosque is being expanded in Strasbourg, France. This expansion is being financed in part, with government subsidies in the millions of Euros. When completed, the Eyyub Sultan mega-mosque is slated to be the largest one in Europe, with 14 floors, two 44-meter high minarets, and 28 domes. 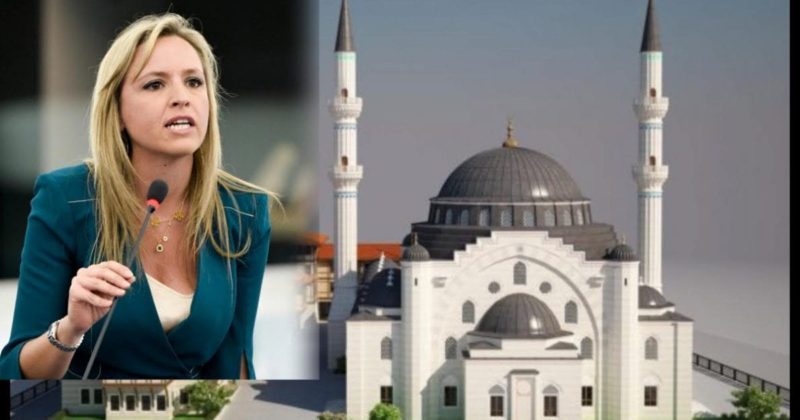 RAIR Foundation Italian MEP Silvia Sardone of the Lega Party visited the mosque site in Strasbourg to express her anger at the Islamization of Europe and Muslim takeover of the “Capital of Europe.” Strasbourg is considered the legislative and democratic capital of the European Union. Furthermore, the leader slammed the left-wing Greens party for helping Turkey and Qatar conquer the continent.

MEP Sardone explained that the 10,000 square meter complex would comprise “a prayer space suitable for hosting 3,000 believers, several conference halls, a library, a teachers’ room, restaurants, some stores, plus a parking lot with a capacity for 600 cars. This Turkish-controlled mosque will be one more victory in Erdoğan’s plan to Islamize Europe, seize control and ultimately re-establish the Ottoman Empire.

The mosque, which is a part of the Millî Görüş Islamic Confederation (CMIG), recently refused to sign President Macron’s newly unveiled anti-extremism charter. This charter would mean the mosque agrees in writing to disassociate from Islamic precepts (which are anathema to Western culture and civilization) and demand that the Mosque respect French law and renounce what he calls “political Islam.”

Turkish Prime Minister Recep Tayyip Erdogan has made it clear that Turkish controlled mosques in foreign countries are military outposts for his loyal soldiers:

In 2018, in Germany, Erdogan urged Turks not to assimilate and called the assimilation of migrants in Europe “a crime against humanity.” He apparently wants his soldiers to remain part of Turkey and the Ummah, the global Muslim community.

In a powerful speech in front of the Strasbourg mosque, MEP Silvia Sardone declared, “Muslims are taking over the capital of Europe now. Here political Islam, the most dangerous, it is taking over.”