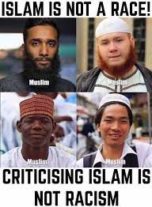 Muslim imam in the UK threatens that there will be more trouble unless Islam and Muslims are shown the kind of respect they think they deserve. Showing cartoons of the prophet Mohammed has already resulted in a French school teacher being beheaded. The same thing could happen in the UK.