Lithuanian authorities have announced the establishment of a accommodation centre for Muslim illegal aliens in the Polish-populated town of Dziewieniszki near Vilnius, Lithuania. This means that approximately 1,000 illegal aliens would be permanently settled in Dziewieniszki, a village with a population of 500. 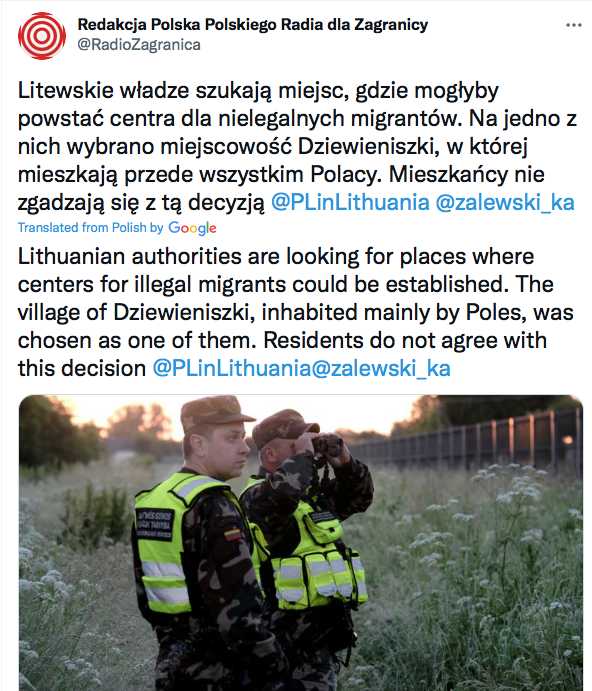 V4NA The local population is protesting against the plan. They are supported by several organizations, including the Lithuanian Polish Electoral Group, the Association of Christian Families, along with Church representatives, public figures and Polish MPs. \

The president also mentioned to the fence erected by the Hungarian government on the Hungarian-Serbian border, which he said was functioning effectively and made it unnecessary to place a large numbers of illegal migrants in reception centres.

MEP Anna Maria Siarkowska on Twitter said that the Lithuanian plans were contrary to international law and the Polish-Lithuanian treaty. The latter stipulates the parties agree that they would refrain from measures that would lead to changes of the ethnic composition of areas inhabited by national minorities.

“The Islamic immigrants are housed in a building which is adjacent to two schools, including the Polish-language A. Mickiewicz High School of 1st-12th grade children. Poles living in Dziewienski are counting on the help of the Polish government in this matter,” she wrote.

The protests of the Polish people of Dziewienski also reached the Lithuanian Interior Ministry. The demonstrators gathering in front of the ministry waved banners proclaiming: “Listen to Dziewieniszki citizens!”, “NO to the violation of the rights of Dziewieniszki residents”, and “We care about security”.

A local resident said they understood that the illegal migrants need to be placed somewhere, but locals were concerned about the proximity of immigrants. The residents initiated the placement of the migrants in a more remote area where, if necessary, the authorities can intervene before the local population is endangered.