It’s bad enough that designated terrorist group CAIR is constantly stirring up trouble inside the United States, where they are headquartered. But now,  CAIR has the ‘chutzpah’ (unmitigated gall) to “demand” that the U.S. Department of State to designate France among the Countries of Particular Concern (CPC) following the nation’s latest crackdown on Muslim extremists. 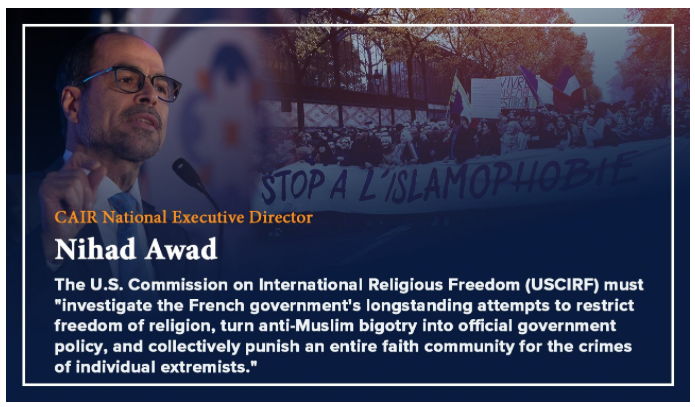 CAIR Over the weekend French Interior Minister Gerald Darmanin ordered the firing of an imam (Muslim religious leader) for citing a verse of the Quran and hadith (saying of the Prophet Muhammad) that he personally deemed “contrary to the values of the French Republic.” Darmanin has also requested steps be taken to ensure the imam’s residence permit is not renewed.

Darmanin’s actions coincide with the French Parliament adopting an Anti-Separatism Bill, an anti-Muslim bill driven by Islamophobic sentiment and drafted with the intention of limiting the religious freedom of French Muslims.

“We once again call for France to be designated as a Country of Particular Concern for its unrelenting crackdown on the religious freedoms of French Muslims, their spiritual leaders, houses of worship, private schools, and civil society organizations,” said CAIR Director of Government Affairs Department Robert S. McCaw. “French Interior Minister Gerald Darmanin is one of the worst Islamophobic offenders in the French government, using his position of state power to sideline and repress the religious liberties of French Muslims. The French government has no business picking a choosing which verses of the Torah, Bible or Quran conform to their ‘Republican values.’” (Au contraire, their country, THEIR rules, don’t like it, LEAVE!)

Over the past 20 years, France has implemented numerous laws designed to limit and punish the free exercise of religion, especially among Muslims. France has banned students, teachers, and public servants from wearing visible signs of their faith, including hijabs, at school or at work.

French law also forbids people from wearing religious face veils in public, while simultaneously requiring them to wear medical face masks. Muslim women in some areas of France have also been fined by police for wearing full-body swimsuits.

In October 2020, President of France Emmanuel Macron delivered a speech about the French Muslim community in which he claimed that “Islam is a religion that is in crisis all over the world today, we are not just seeing this in our country” and expressed concern of “Islamic separatism” and called to “liberate’ Islam.”

In response to the French suppression of Muslim groups coupled with violent attacks against French Muslims, CAIR has issued a travel advisory warning American Muslims against traveling to France amid the French government’s “hypocritical and dangerous” campaign of Islamophobic bigotry targeting French Muslims, mosques and Islamic organizations.

How France became the most hated Western country in the Muslim world. Yet that doesn’t stop thousands of illegal alien Muslim invaders from trying to break into France as migrants.