US Army Lt. Col Allen West (Retired) and over 600 other US military veterans released a letter denouncing Marxism and socialism in the United States, as well as “wokeness” they see that is infiltrating the military. 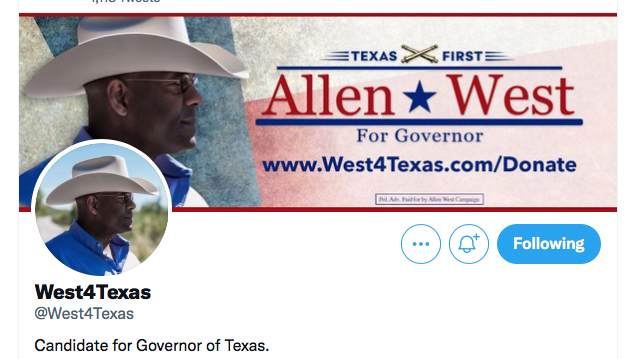 Beltway Report The US military is not a social club. It has two purposes: to kill people and to break things. When you start introducing the racist critical race theory garbage and other Marxist-based policies what you end up with is you no longer have the greatest military force in the world. Progressives do not understand the military, otherwise, they would never have stooped so low as to do the things they have been implementing since Joe Biden stole the election.

West and his Committee to Support and Defend project organized the letter along with the American Constitutional Rights Union (ACRU), says, “As former members of the U.S. military who have proudly served our nation, we write to express our support for Constitutional freedom and liberty and our concern for our country as many powerful forces seek to bring Socialism and Marxism to our land.” 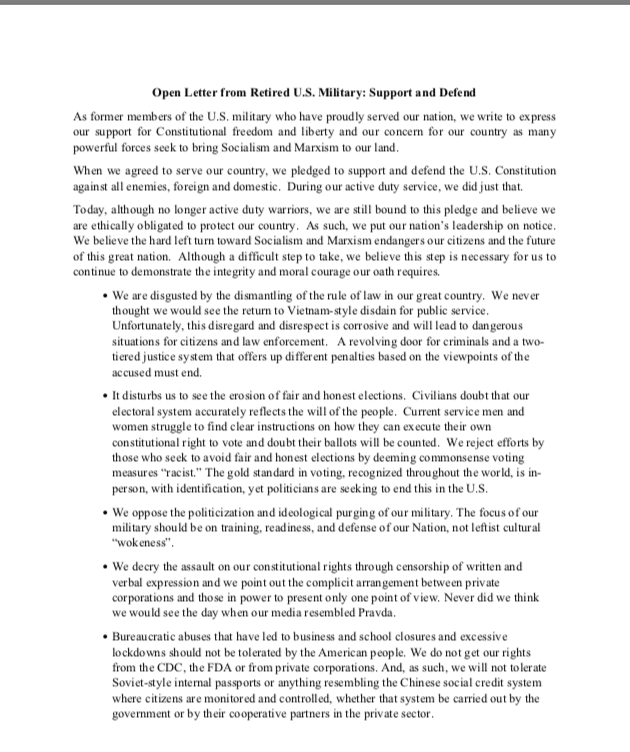 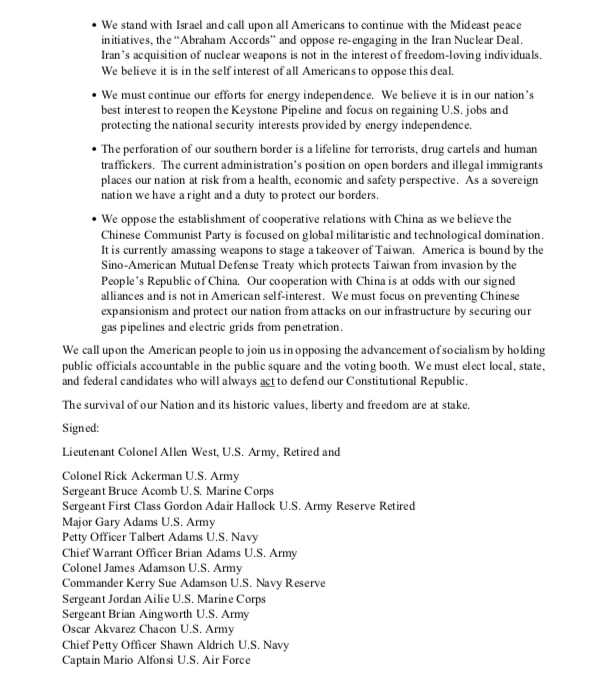 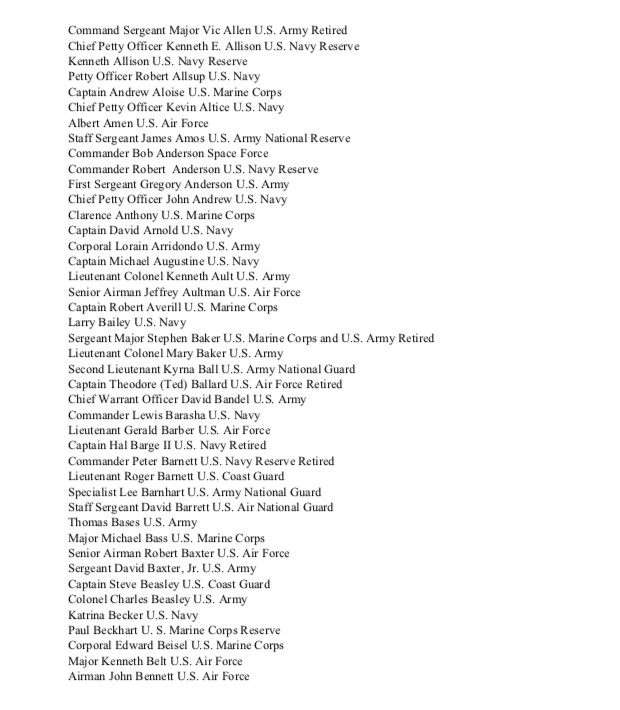 “We oppose the politicization and ideological purging of our military. The focus of our military should be on training, readiness, and defense of our Nation, not leftist cultural ‘woke ness,’” the letter continued.

US Marine Major Dan Rabil (Retired) told American Military News that he decided to sign the letter because the Biden administration has described an effort to root out extremism, but what’s clearly going on is the progressives are ramping up efforts to purge the ranks of political ideologies the progressives don’t like. That means anyone to the right of Vladimir Lenin.

“They’re not looking for ANTIFA people in the ranks, they’re looking for people who you know are on the right,” Rabil said. “Basically it’s a signal, ‘First of all we’re anti-white, and then secondly we’re anti anybody who votes from the right or has affiliation with anything, you better be careful because we’re going to separate you; we’re going to come after you.’”

Rabil revealed that he served in the military all throughout the 1990s and he felt that back then it wasn’t blatantly political. His experience was the common philosophy was that everyone who entered the military began on an equal footing and a meritocracy system made sure that those who applied themselves could succeed. That is the truest form of equality of opportunity which includes everyone.

“It’s a place and should be a place where everybody can get thrown in, the poor guy from the ghetto and the wealthy guy from not the ghetto, they go through the same training in boot camp and get deployed to the same place.”

The retired Major said that he has concerns that the current efforts to politicize the military is to replace conservatives among the ranks to create a “malleable, Marxist friendly force.”

Those who signed the letter are worried because they are getting reports being shared by lawmakers that members of US forces are being told that whole military organizations are “racist” and now service members are being ordered to segregate themselves by race and sex to create a hierarchical order that is based on a person’s perceived privilege.

That is government-sanctioned racism, and it is against federal law. The signors said that they pledged to serve the country, and that oath compels them to protect the country from the dangerous ideologies that are infiltrating the top ranks who will then indoctrinate the troops.

“When we agreed to serve our country, we pledged to support and defend the U.S. Constitution against all enemies, foreign and domestic,” the letter continues. “During our active-duty service, we did just that. Today, although no longer active-duty warriors, we are still bound to this pledge and believe we are ethically obligated to protect our country. As such, we put our nation’s leadership on notice. We believe the hard left turn toward Socialism and Marxism endangers our citizens and the future of this great nation. Although a difficult step to take, we believe this step is necessary for us to continue to demonstrate the integrity and moral courage our oath requires.”

Allen West, former Congressman and more recently, Chairman of the Texas Republican Party, is now running for the Governor of Texas. Here he is a few  years ago answering a stupid far left college student’s question about Islam.

And here he takes on a Muslim who tries to defend Islam.