Al-Shabaab terrorists, the African arm of the Islamic State (ISIS), have wreaked havoc in Mozambique in recent years, leaving thousands dead and public evidence of their trademark beheadings. They are preparing for a showdown with thousands of soldiers, as the jihadis “retreat into hideouts” 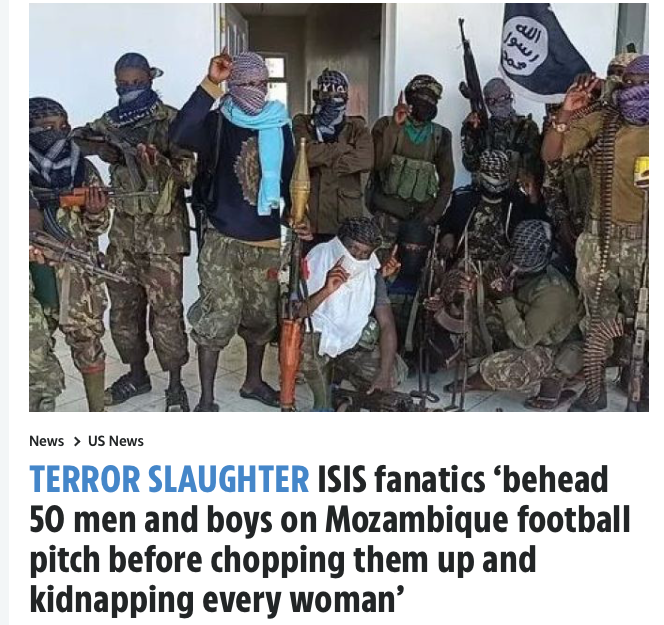 The southern African country has been overrun by Islamic militants in recent years. Approximately 3,000 people have been killed in the chaos and almost 800,000 have been displaced.

Last week, Rwandan soldiers clashed with the jihadists on the border with Tanzania, inflicting dozens of casualties. David Otto, counter-terrorism and organised crime expert at Global Risk International, believes the terrorists will retreat and regroup as the coalition advances.

He told the Daily Star: “[It] will force the jihadist into a defensive position at first – retreating into hideouts gives them enough time to re-assess the operational impact of arriving troops.

“How quickly the arriving troops jump straight into action after mastering the terrain could mean jihadists would be desperate to increase their numbers and look for more recruits.

“I suspect the jihadists will be looking to change targets and narratives. “To win more local support, they may soon limit their attacks on hard military positions and push foreign troops to fall into human rights abuse traps.”

Locals refer to the armed group as the Machababos or Al Shabaab, but the ISIS-affiliated group calls itself Al-Sunnah Wa Jama’ah. Factions affiliated to ISIS have grown in strength in Mozambique’s northern Cabo Delgado province in recent years.

The region is rich in oil – featuring Total and Exxon Mobile bases – and its deep forests offer terrorists smuggling routes for arms and ammunition.

In March, ISIS said its fighters had carried out an attack on the town of Palma. They claimed to have killed at least 55 people, including a number of soldiers, destroyed and taken control of buildings including factories and banks, and seized vehicles. Communications were cut and headless bodies were left lying on the road during the assault.

Mr Otto believes a permanent military presence in Cabo Delgado may be required once the jihadis are routed. He added: “Once an insurgency begins to express itself in this violent form, how and when it ends is never a quick fix.

“Unfortunately, this is always the weakness of state engagement – you never know when the fighting will stop because you cannot accurately estimate the strength and depth of your enemy.

“What could possibly happen in the near future is a case where the jihadists will be looking at ways to spread their attack targets using smaller cells to SADC states – particularly to countries that have contributed troops to Mozambique, including Rwanda.