Joe Biden just handed the Taliban a U.S. weapons goldmine. They have already captured at least 12 provinces including Kandahar, Afghanistan’s second largest city next to Kabul, the capital, which likely also will fall to the Taliban in the coming weeks. 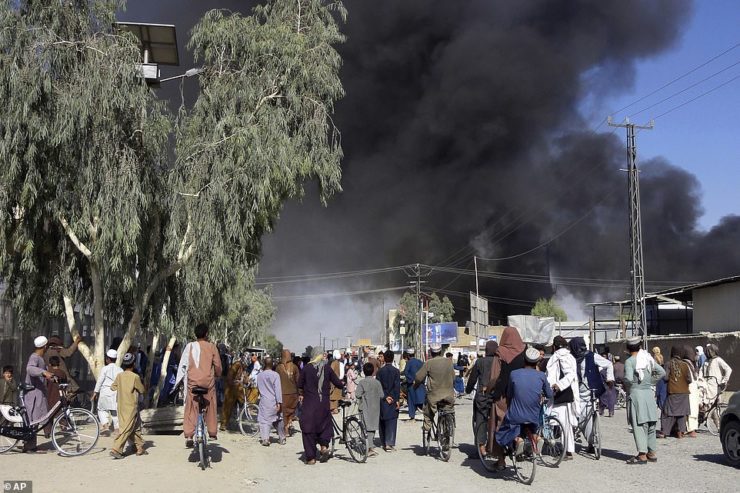 100percentfedup (h/t Nita) When the Joe Biden regime announced to the world that there would be a withdrawal of US troops in Afghanistan at the end of August, he set up the collapse of the Afghan National Army and the takeover of Kabul. More about this “strategy” in a video below where Sean Parnell describes the difference between the Trump planned withdrawal and the Biden plan.

36 days ago, President Biden told the American people that the Taliban would not take over #Afghanistan after he ordered the removal of U.S. troops. 🤡pic.twitter.com/0pdlxoLKtd

It’s a serious time where thousands of our US troops are being sent back into harm’s way to fix the mess that Biden caused. What’s Biden doing right now? He’s spending a long weekend at Camp David. He has no public appearances for 5 days.

While Sleepy Joe is napping at Camp David, the Taliban is gathering millions of dollars in US military equipment like Blackhawk helicopters and weapons (photos below). 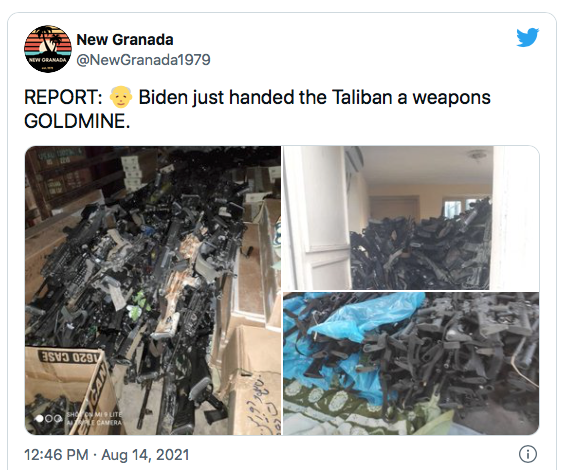 Large cache of US weapons:

Large cache of US weapons taken by Taliban in this compound. #Afghanistan pic.twitter.com/F4UYVphh3Q

Hundreds of trucks abandoned to the Taliban:

US supplied vehicles just sitting in lots doing nothing because the Afghan army has now idea what to do with them until just abandoning them to the taliban. now every Taliban fighter has their own personal MRAP lmao pic.twitter.com/oeGgHBKSfV

Daily Mail reports one Taliban commander taunted the US: “We will enter Kabul like a roaring lion soon, God willing, hopefully within this month and wrap up the American puppets who are already in a state of fear. Their silence on our triumphs in the south and west speaks for itself, and they are hiding like cowards.”

The Taliban have our Blackhawk helicopters…

TRUMP’S PLAN vs BIDEN’S PLAN: The difference between success and disaster:

“Our generals were more concerned with fighting Tucker Carlson than they were the Taliban” – @SeanParnellUSA pic.twitter.com/j9kYvXswxt