New Zealand cops shoot dead ‘Islamic State (ISIS) -inspired’ devout MUSLIM from Sri Lanka who wounded six in supermarket stabbing rampage despite the fact that he had been under 24/7 surveillance after threatening to hunt down ‘Kiwi (New Zealanders) scum.’

UPDATE: (h/t Chris B) The ISIS-supporting MUSLIM terrorist who went on a stabbing rampage in New Zealand Friday has been named as Ahamed Aathil Mohamed Samsudeen. The 32-year-old Sri Lankan refugee was shot dead after stabbing five people and injuring two others during an attack at the Countdown supermarket in New Lynn in west Auckland. 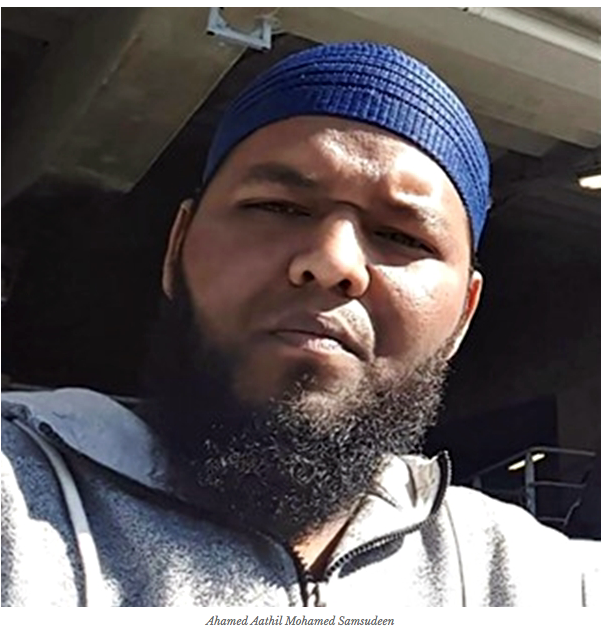 The Muslim terroirst’s  identity had been shielded under New Zealand’s stringent privacy laws after a High Court judge ruled the knifeman’s family must have at least 24 hours ‘to seek a suppression order’ – which ran out at 9pm local time.

However Samsudeen appealed and a final decision on whether he should be deported had yet to be made, reported the New Zealand Herald. 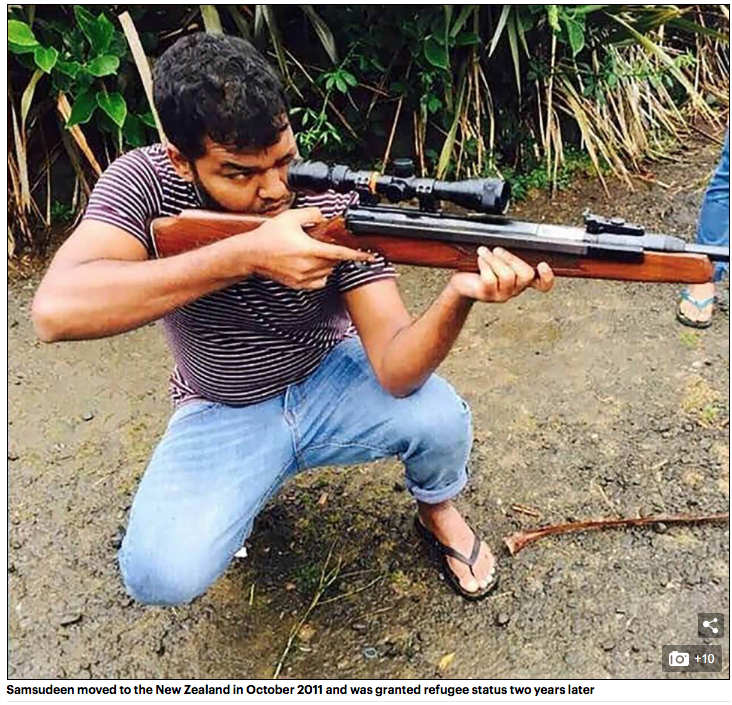 So why isn’t New Zealand Prime Minister Jacinda Ardern all decked out in her ‘hijab’ again following a Muslim terrorist attack in her country? 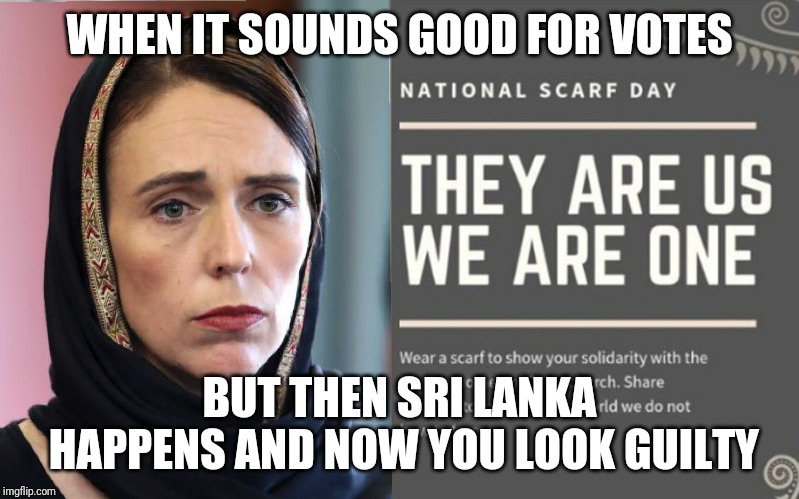 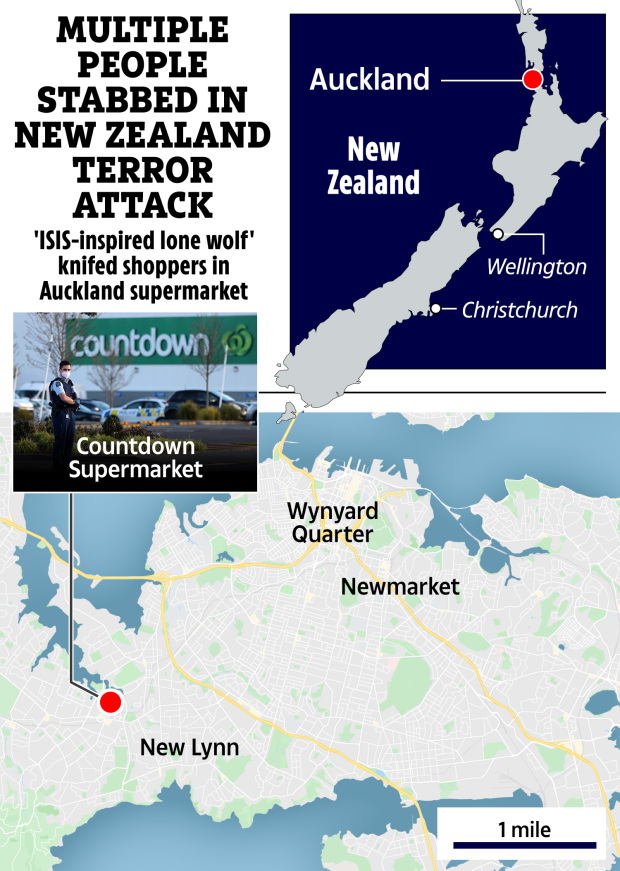 Daily Mail Ten rapid-fire shots are heard in the footage, filmed on a phone from outside the supermarket’s entrance, as frightened shoppers rush past. A commotion inside the store can be seen as the camera pans past a trail of blood leading from the door of the Countdown supermarket in New Lynn, in the country’s south.

The six injured were left fighting for life in hospitals across New Zealand’s north island on Friday afternoon. Three of the victims were described as being in a ‘critical’ condition, with neck and chest wounds, after hero shoppers rushed to give first aid to the wounded.

The Muslim terrorist, a 32-year-old Sri Lankan man identified only as ‘S’ for legal reasons, is known to have posted a warning to ‘Kiwi scums’ on social media after receiving a formal warning from police over his disturbing internet searches and purchases. 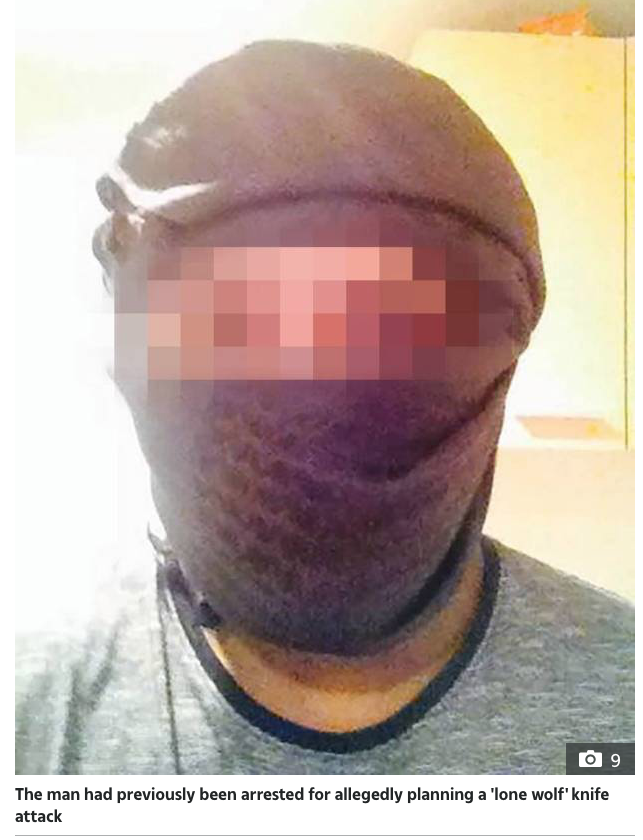 On Friday, the man was followed by police from his home all the way to the supermarket where he grabbed a knife from a shelf and started the attack.

There had been fears of an imminent terror attack in the wake of the Taliban takeover and the chaotic departure of Western powers from Afghanistan, with extremists emboldened by the radical Islamists’ return to power.

Prime Minister Jacinda Ardern revealed that the suspect was considered one of the nation’s most dangerous extremists and had been watched 24/7 since 2016, adding she was ‘gutted’ he was able to carry out the attack despite being on the terror watchlist. (And what does that say about your terror watch list? You watch, but don’t do anything) 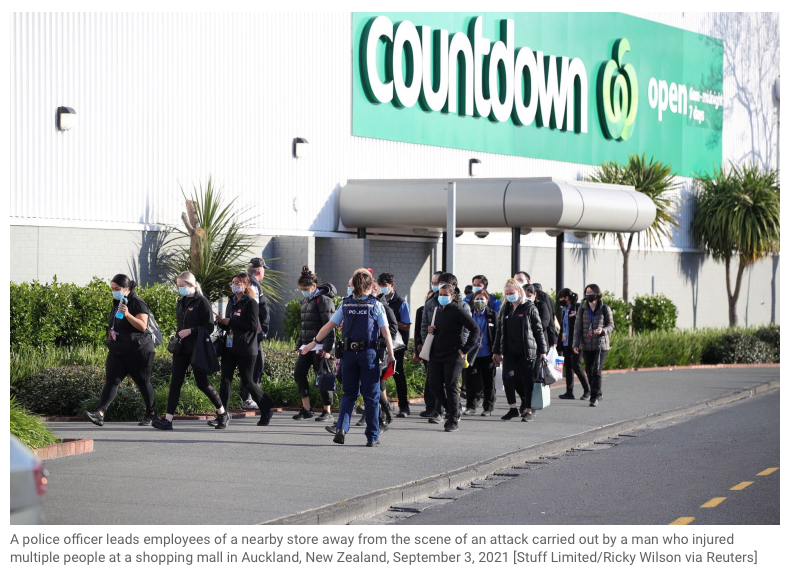 ‘What happened today was despicable, hateful and wrong,’ she said. ‘It was carried out by an individual, not a faith or religion (LIAR, he did it in the name of Islam). He was gripped by violent and ISLAMIC State-inspired ideology..

‘This was a violent attack. It was senseless. And I am so sorry that it happened.’ (Imagine how sorry his victims are that you are so welcoming to Muslim terrorists)

Notice how Ardern calls him a “Sri Lankan national,” “an individual” and a “violent extremist” but never mentions that he is a Muslim:

Due to suppression orders that are already in place, Ardern says there is information about the man’s identity and details of his past criminal history that cannot yet be revealed.   She vowed to share any further details ‘within the confines of the law’ if the court lifted suppression orders in the wake of his death.

The 32-year-old offender reportedly landed himself on terror watchlists after twice buying hunting knives and being found to possess Islamic State propaganda videos, NZHerald reported.  After receiving an official warning from police over his internet search history and purchases, ‘S’ continued to consume extremist content online online and posted the following warning on social media:

‘One day I will go back to my country and I will find Kiwi scums in my country… and I will show them… what will happen when you mess with S while I’m in their country. If you’re tough in your country… we are tougher in our country scums #payback,’ he wrote.

In May 2017, ‘S’ reportedly told a worshiper at a mosque that he hoped to join ISIS in Syria and was detained at Auckland International Airport in 2017 after booking a one-way flight to Singapore.

A subsequent search of his apartment uncovered weapons and images of him posing with an air rifle and hunting knife, the New Zealand Herald reported. 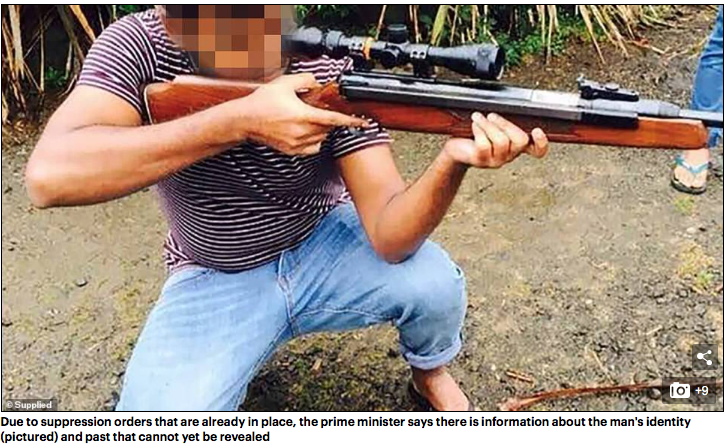 He was held in custody without bail for more than a year and eventually pleaded guilty to distributing restricted material. A High Court judge sentenced him to supervision in 2018 because of the amount of time he had already spent in prison.

The day after he walked free from prison in 2018, ‘S’ purchased yet another hunting knife. He was arrested again, but was not prosecuted under the liberal country’s terrorism laws, which police, politicians and judicial officials have long criticized as not fit for purpose.

Police hoped to prosecute ‘S’ under the Terrorism Suppression Act 2002, but it was determined that preparing a terrorist attack was not an offence under the legislation, given he had not carried out any attacks.

He was prosecuted on lesser charges of possessing propaganda in support of ISIS. During his trial, ‘S’ reportedly told the jury: ‘You’re worried about one knife, I am telling you I will buy 10 knives. It’s about my rights.’