The French people are currently engaged in a struggle of survival against the Great Replacement, French author and philosopher Eric Zemmour said on the television channel CNews’ evening political talk show.

REMIX News“I think the anguish felt over the end of France as it was, the anguish of the Great Replacement, has become a global feeling,” said Zemmour. “The fear of no longer being France, the fear of the famous Great Replacement. A lot of people are starting to think that Islam is going to replace us. It has become a massive feeling, a mass of 70 to 80 percent of France.”

The Great Replacement is a term coined by French author Renaud Camus in his 2010 book “The Great Replacement”, in which he proposes the theory that indigenous French people are being demographically replaced by non-European, mainly Arab and African Muslim peoples.

“Donald Trump has a brilliant formula that I want to make mine for France. We are engaged in a struggle for the survival of France as we know it,” said Zemmour.

France is undergoing rapid demographic change and has the largest Muslim population in Europe. In March of this year, influential philosopher Michel Onfray also said the Great Replacement is real despite claims that it is a far-right conspiracy theory. 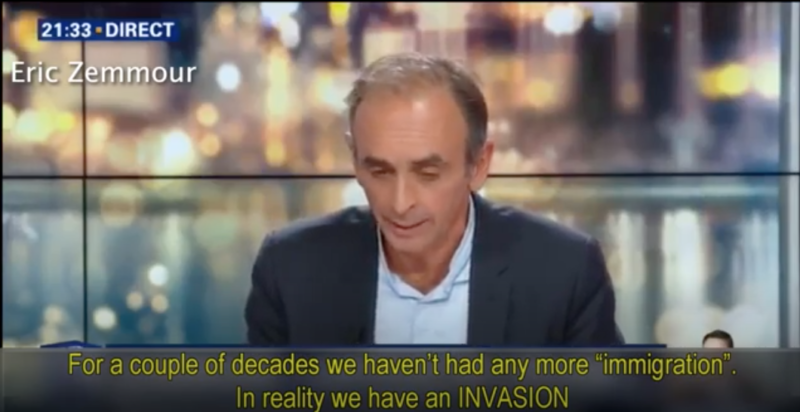 “Is there in fact a Great Replacement? Demographers say yes, there is. It is very simple. There are men and women, they procreate, you have a certain birth rate, you do the calculations, make projections, and it will show a graph,” he said, pointing out that those who dismiss the idea say this will only happen in a distant future but cannot deny that demographics are changing, with ethnic Europeans moving towards a minority position in countries across the West.

Zemmour also noted that corporations are shifting away from merit-based capitalism to a system largely focused on diversity at any cost. “In big companies, people tell me about the exasperation at the ideological pressure that weighs on them with ethnic diversity and the promotion of minorities to the detriment of merit,” he added.