On the 20th anniversary of the September 11th Muslim terrorist attacks, members of the Fairfax County School Board entertained a resolution for a moment of silence. It was intended to honor the first responders who risked their lives to save countless lives, as well as the the nearly 3,000 victims who were murdered and those who were injured as a result of the Muslim terrorist attacks carried out that day. 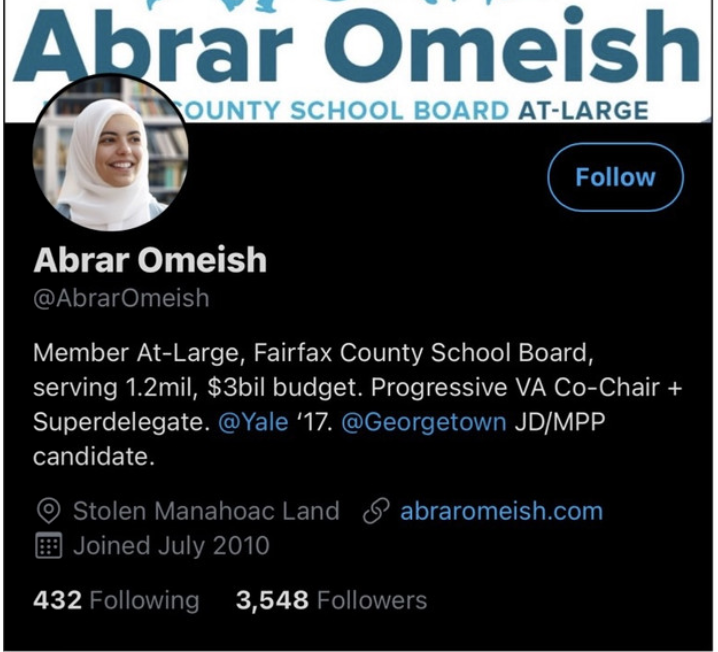 Daily Mail (h/t Nita)  ‘Perpetual victim wannabe’ Muslim board member Abrar Omeish, who has previously sparked outrage for her anti-Semitic comments and encouraging high schoolers to ‘remember jihad,’ voted against the resolution, saying it was  ‘racist’ and failed to address ‘state-sponsored Muslim traumas.’

But while Omeish voted against the motion, it was ultimately passed thanks to votes from all other members of the board.

In place of the proposed 9/11 resolution for a moment of silence, Omeish, instead preferred to have this resolution:

Commemorating Twenty Years of Social and Political Impact (on Muslims) of the September 11, 2001 Terrorist Attacks

WHEREAS, according to FBI statistics, there have been nearly 5,000 victims of reported anti-Arab or anti-Muslim hate crime since 2001, including others percieved to be Arab or Muslim, which increased exponentially in the backlash following the September 11, 2001 terrorist attacks, much of which impacted our families here in Fairfax County; and,

WHEREAS, the U.S. Department of Justice, just days after September 11, 2001, documented that members of our own Fairfax community were discriminated against, and according to the Virginia State Police there were 28 reported anti-Arab and 25 reported anti-Muslim hate crimes in the Commonwealth in 2001 alone, though the actual number of victims is much larger as hate crime is severely under-reported; and

WHEREAS, the U.S. government also engaged in extensive and unwarranted discrimination and ethnic and religious profiling following the September 11, 2001 terrorist attacks which harmed FCPS families and students, some of which targeted FCPS Muslim student groups; and,

WHEREAS, a quarter of Arab Americans polled in 2010 reported post–September 11 abuse which led to higher levels of psychological distress, lower levels of happiness, and worse health status; and more than half of Muslim students polled in 2015 reported experiencing bullying, which is twice the national average; and in a 2020 American Muslim poll half of American Muslim parents reported that their children experienced religious-based bullying in schools, and in the same survey parents reported that one out of every three incidents involved a school official; and in early findings of a larger research study of Muslim student experiences in Northern Virginia, presented to the Virginia Department of Education reveal that Muslim students experience targeted bullying during September 11 lessons, such trends of religious- and ethnic-based bullying are experienced by FCPS families, staff, and students on a daily basis; and,

NOW, THEREFORE, BE IT RESOLVED, that the Fairfax County School Board encourages the teaching of September 11, 2001 and its social and political impacts on our community and our country, as a lesson in the dangers of collective blame, xenophobia, and the demonization of entire populations, and affirms the need for proactive and intentional anti-bias education and policies as a means toward examining these societal ills; and,

BE IT FURTHER RESOLVED, that mental health services for the families of victims of September 11, 2001, first responders, military veterans, Muslim victims of hate crime and discrimination, and Muslim refugees are essential to addressing how these events continue to shape our community; and,

BE IT FURTHER RESOLVED, that the Fairfax County School Board condemns violence, hate, bigotry, discrimination, and xenophobia in all forms, and denounces two decades of policies, actions, and rhetoric which disproportionately impacted Arab Americans, Muslims, and those perceived to be Arabs or Muslims here in Fairfax County and across our country.

Omeish’s speech saw a rebuke issued by fellow board member Dr Ricardy Anderson, who accused Omeish of trying to derail a motion that had previously been discussed.

America First campaigner Asra Nomani – who is also Muslim  – led condemnation of Omeish, and tweeted: ’16 groups send a @fairfaxtimes letter to @fpcpsnews School Board: A Call to Censure and Remove Abrar Omeish. They cite her hateful + culturally repugnant rhetoric. She voted “No” to honor 9/11 victims + launched into a self-absorbed tirade.’ 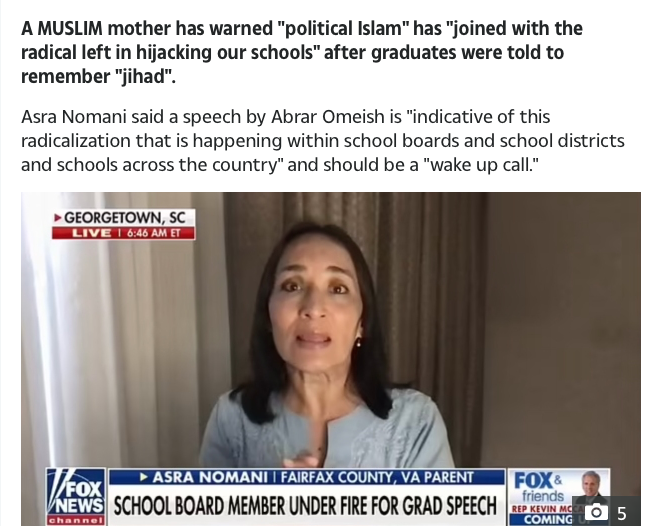 It also sparked fury with a parent in attendance. ‘I’d expect that no parent can speak up to this, we are restricted about how…’ she said before she was interrupted by board member Stella Pekarsky who asked her to ‘please sit down and stay quiet.’ The woman screamed inaudibly and was met with applause from other parents seated in the auditorium. She was captured grabbing her purse and yelling ‘Its a sham, its a show, enjoy it!’ as she walked out of the auditorium.

Omeish’s comments even led to a call from a local paper to censure and remove her from the school board. ‘As Fairfax County School Board Members, you must immediately issue a public statement separating yourselves from the hateful and callous rhetoric of your colleague and hold Ms. Omeish accountable for her words and actions, once and for all,’ the Fairfax County Times said in an op-ed.

On Saturday, it emerged that 16 local education groups have also signed a letter addressed to the paper calling on Omeish to quit.

Omeish, who is the sole Muslim member on the Virginia school board, is no stranger to controversy. 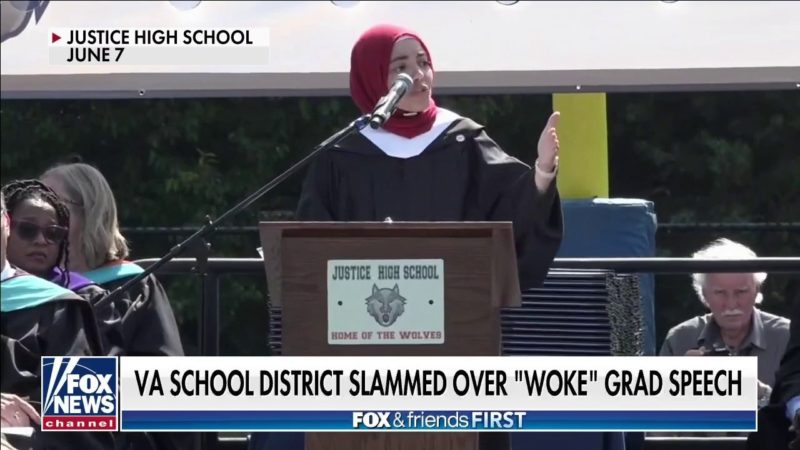 This past summer she incited community outrage by calling on graduating high school students to remember ‘jihad’ at their commencement as she warned they were entering a world of, ‘racism, extreme versions of individualism and capitalism, [and] white supremacy.’

Fairfax Times According to The Daily Mail, Omeish told the graduates in English that: ‘The world sees the accolade, the diploma, the fruit of all your years yet be reminded of the detail of your struggle.’ But when she repeated the speech in Arabic, she told students to remember their ‘jihad’ – a word meaning both ‘struggle’ and, specifically, holy war waged on behalf of Islam.

Switching between Arabic and English languages, Omeish warned the graduates about the world. “Our world is overwhelmed with need,” she said. “We struggle with human greed, racism extreme versions of individualism and capitalism, white supremacy, growing wealth gaps, disease, climate crimes, extreme poverty amidst luxury and waste right next door. And the list goes on.”

Many parents took to Facebook to voice their displeasure of the speech, some commenting that they would have walked out of the ceremony rather than listen to “that garbage.” “What an embarrassment that she is one of our school board members. She’s openly anti-Semitic and takes no responsibility for her actions,” said one parent. “A rich girl who went to Yale and won a political election in one of the richest counties uses her position to teach our kids that they will be oppressed by a racist and capitalist society. Such a disgrace!” said another.

According to Gary Aiken, a Fairfax County parent:

“Abrar Omeish seems only concerned with turning kids into activists for her political causes. Her comments and her refusal to apologize [for what many have deemed anti-Semitic social media posts] and this latest doubling down on her hateful ideology and insistence on making it an issue on the School Board is distracting, and worse it’s a direct violation of the Code of Conduct for Board Members,” he said, noting that her speech is not her first example of divisive rhetoric. “If any of our students said the things she said, they’d be in violation of the Student Rights and Responsibilities and subject to consequences.”

She also sparked controversy recently for her tweet attacking Israel. On May 13, she posted: 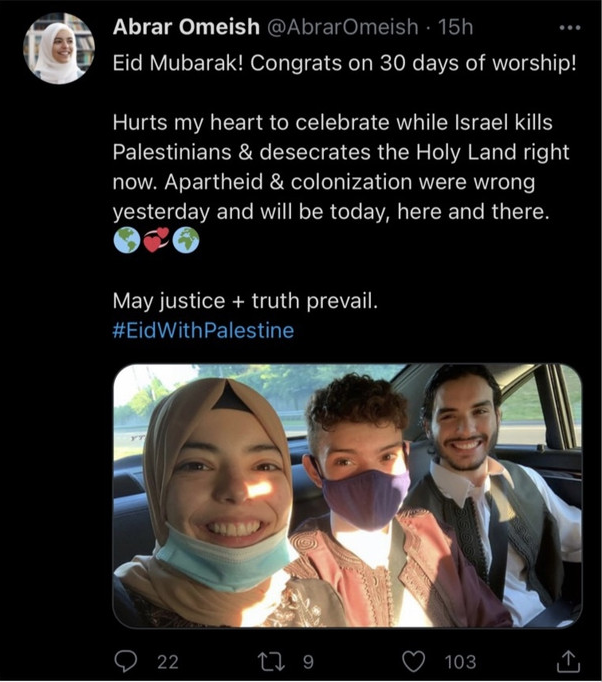 The tweet sparked such strong backlash that the Fairfax County Republican Committee called on Omeish to resign. Instead, she refused and hit out at her ‘haters’ calling them a ‘different breed’ of cheerleader.

‘No matter how many haters emerge, I’m sure you’ve encountered them yourselves, and believe me they’re a sign you’re unsettling the status quo towards justice,’ she said. ‘Just consider them your cheerleaders of another breed. When they try to bury you, remind them you are a seed.’

Fairfax itself has hit the headlines amid clashes over the teaching of critical race theory, with parents including Nomani also claiming that the school is dumbing down its curriculum in a bit to achieve equity – equality of outcomes – for students.