According to Campus Watch, which has posted 275 outrageous public statements by Middle East Studies professors, picking the worst of them is arduous, given the quantity of vitriolic, conspiracy-mongering nonsense. Still, we embrace this job with great good humor or, when required, grim resolve. 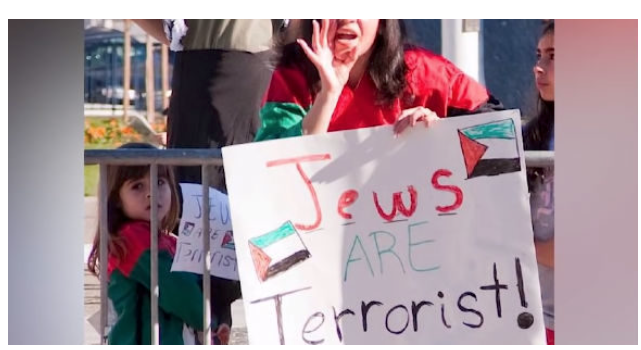 The College Fix The selections below were chosen on their individual merits, so to speak. Some are blatantly vile, others unintentionally comical, but all illustrate the moral and intellectual bankruptcy of Middle East studies in North America. Each speaker should recoil in shame when confronted with his own words, but we aren’t so naïve as to expect it.

1. “We really idolize somebody like Leila Khaled, somebody who actually stands up for herself, speaks for herself, actually goes to a plane and hijacks it.” Rabab Abdulhadi, professor in Arab and Muslim Ethnicities and Diasporas/Race and Resistance Studies at San Francisco State University. Goldengate Express, September 22, 2020.

Who doesn’t get misty-eyed recalling the grand old days of Palestinian airline hijackings? What better way to preserve that glorious legacy than teaching students to idolize the Queen of Terror at 30,000 Feet, Leila Khaled? Back in 1970, Khaled helped hijack an El Al flight but failed to blow it up when her grenade didn’t explode. A role model for the ages.

2. “I don’t think you can talk about slavery in Islam until you realize that there is no such thing as slavery. . . . Slavery cannot just be treated as a moral evil in and of itself. I don’t think it’s morally evil to own somebody because we own lots of people all around us. And we’re owned by people.” Jonathan Brown, Alwaleed bin Talal Chair of Islamic Civilization at Georgetown University. From a lecture at the Islamic extremist-run International Institute of Islamic Thought, in IPT News, February 13, 2017.

Most of us yokels, when asked our opinion on slavery, would condemn it in the strongest possible terms. But most of us don’t shoulder the heavy burdens of Jonathan Brown, who lives the double life of university professor and Islamic extremist. How to speak publicly on slavery in Islam, then, while fulfilling dueling identities? Try to muddy the waters so that decent people aren’t appalled, but slavery-supporting Islamists won’t think you’re a sell-out. But Brown blew it by failing to grasp that contemporary slavery isn’t a terribly ambiguous issue for normal people. This episode tells us all we need to know about both Brown’s common decency and his common sense.

3. “Compared to the scale of death and destruction that the U.S. has unleashed on major cities in Afghanistan and Iraq, and later Bashar al-Assad and his nemesis have visited upon Syria, the destruction of those two [World Trade Center] towers now appears as entirely negligible, even remembering them perhaps an insult to the memories of hundreds of thousands of innocent human beings maimed and murdered and turned into hopeless refugees in Afghanistan, Iraq, Libya or Syria.” Hamid Dabashi, Hagop Kevorkian Professor of Iranian Studies and Comparative Literature at Columbia University. Published in Al-Jazeera on the fifteenth anniversary of 9/11, September 11, 2016.

Hamid Dabashi would be cringe-worthy as a second-rate literary villain. As a chaired professor, he’s testimony to academe’s moral and intellectual depravity. Unabashedly anti-Semitic, spiteful toward his adopted country, less a revolutionary than shallow narcissist, Dabashi’s writings insult the memories of those slaughtered on 9/11.

4. “Israeli complaints that Gaza is controlled by the party-militia, Hamas, freely elected in 2006, and that Hamas fires (mostly small, home-made and ineffectual) rockets into Israel, are irrelevant to the requirement that civilian noncombatants in Gaza be provided with basic staples by the occupying authority.” Juan Cole, Richard P. Mitchell Collegiate Professor of History at the University of Michigan, in the Nation, February 3, 2016.

You have to have a soft spot in your heart for those upstanding Hamas terrorists. Here they are minding their own business, just trying to kill and terrorize as many Jews as possible by raining thousands of rockets down on civilian populations. But those damned little rockets! Why, they’re hardly bigger than roman candles, and it seems no matter how many they launch, they never kill all the Israelis! Thank goodness for truthtellers like Juan Cole!

5. “The imperial complicity of the Gay International, including its Arab members, lies in their calling upon all Arabs who refuse the imperial hegemony of the hetero-homo binary to unlearn and unthink the way they desire, and that they learn and think their desires along the lines of the hetero-homo binary, indeed that the way they exist and the way they are, their very ontology, is a form of false consciousness, which they must shed, as the truth of who they are, according to this logic, lies in their adoption of the imperial hetero-homo binary through which they must apprehend themselves and their desires, which will lead, according to the Gay International, to their emancipation.” Joseph Massad, associate professor of modern Arab politics and intellectual history at Columbia University. From an interview in Jadaliyya, March 5, 2013.

We don’t know what the hell this means, but Massad seems to decry “the hetero-homo binary” as hegemonic, especially in its imperial form, and believes that emancipation requires this very ontology. Or something.

6. “It wasn’t the 21-year-old Michael Enright who drunkenly slashed his New York city cab driver after asking ‘Are you Muslim?’ It was the Republican National Committee. . . . Newt Gingrich and Rick Lazio may as well have kept Enright in their basements in chains and whipped him into a frenzy as to spew their hatred on the airwaves.” Juan Cole, Richard P. Mitchell Professor of History at the University of Michigan. At his blog Informed Comment, August 25, 2010.

Most folks would settle for alien abductions, but back in 2010 Cole couldn’t shake imagining violent kidnappings. We’re not a shrink, so we won’t speculate why, but that March he wrote that being a Middle East expert who is ignored in the public arena is like being an MLB player ready for the World Series who’s “kidnapped,” taken to a “secret fight club,” and made to face a “giant James Bond villain.” By August, he was fantasizing that Newt and Lazio were into whips and chains. Projection or the heat of summer? You judge.

7. “If Jews can get reparations from Germany, then Palestinians should get reparations from Israel. After all, what the Germans supposedly did to the Jews is what Israel is doing to the people of Palestine.” Susan Slyomovics, professor of anthropology and former director of the Center for Near Eastern Studies (CNES) at UCLA. Spoken during a break at a UCLA conference, via FrontPage Magazine, April 16, 2010.

Such a sly Susan! We don’t mean her pedestrian analogy that Israelis = Nazis, Palestinians = Holocaust victims. Yawn. Every self-respecting Israel hater knows that. But see how she surreptitiously sneaks in “supposedly” just when you didn’t expect it? It’s a two-fer: casting doubt on the veracity of the Holocaust while smearing Jews as the new Nazis. It’s a calculated convolution!

8. “Wahabism is like the Baptists; it’s kind of a denomination of sorts that started out in Saudi Arabia.” Ebrahim Moosa, then at Duke University, now Mirza Family Professor of Islamic Thought & Muslim Societies at the University of Note Dame. As reported in the Charlotte Observer, February 25, 2010.

The rank disingenuousness of Moosa’s claim is seen in a quote from the great historian Bernard Lewis. In illustrating the power that Wahhabi Islam gained during the twentieth century, Lewis said: “Imagine that the Ku Klux Klan gets total control of the state of Texas. And the Ku Klux Klan has at its disposal all the oil rigs in Texas. And they use this money to set up a well-endowed network of colleges and schools throughout Christendom, peddling their peculiar brand of Christianity. You would then have an approximate equivalent of what has happened in the modern Muslim world.”

9. “I do not find any evidence that makes me agree that Osama bin Laden was behind the attack on the twin trade towers. All we have heard from him was simply a praise and commendation of those who had carried out the operation.” Natana DeLong-Bas, then a lecturer at Boston College and Brandeis (Jewish-founded) University, now associate professor of theology at BC. From a December 21 2006 interview in Al-Sharq Al-Awsat, translated by MEMRI, January 2, 2007.

Careful scholars are hesitant to pass judgment on people or events before they’ve sifted all the evidence, and by late 2006 our intrepid professor hadn’t finished her primary source research on the events of over half a decade before. We would love to know what other hypotheses she’s studied: was it the Bilderbergers, the Masons, or the Mossad? Hopefully, the long wait for an answer from DeLong-Bas will end soon. Enlighten us, professor!

10. “[The neoconservatives] are convinced that the Middle East is irremediably hostile to both the United States and Israel; and they firmly hold the racist view that Middle Easterners understand only force. For these American Likudniks and their Israeli counterparts, sad to say, the tragedy of September 11 was a godsend: It enabled them to draft the United States to help fight Israel’s enemies.” Rashid Khalidi, Edward Said Professor of Modern Arab Studies and then-director of the Middle East Institute at Columbia University. From In These Times, January 27, 2003.

Listen, as a former PLO spokesman in the 1980s, Khalidi’s job was to be on top of all the intel, so when he says that Likudniks were happy about 9/11, we take him at his word.