The shocking moment that a black woman, Anthonia Egegbara, 29 (below), in an unprovoked attack, shoved a white woman commuter into the path of an oncoming train at a Times Square subway station in New York City was captured on surveillance video. 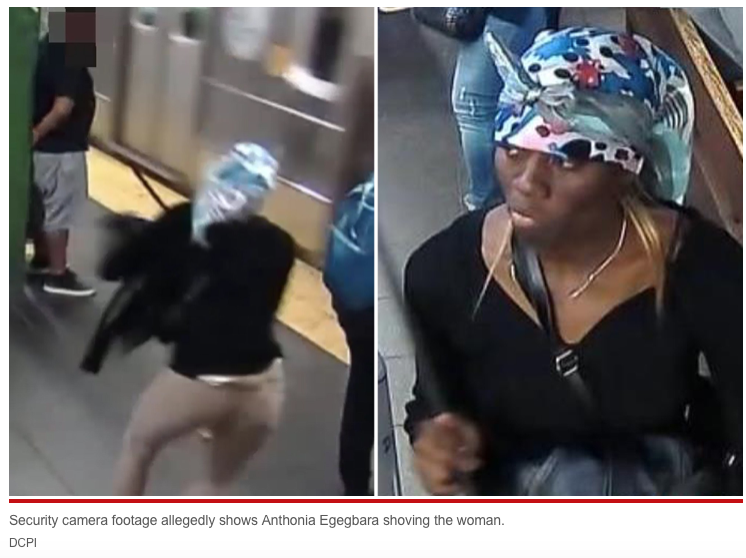 NY Post A woman with a lengthy rap sheet is facing attempted murder charges for allegedly shoving a female straphanger into the side of an arriving train at Times Square, authorities said Tuesday morning.

Miraculously, the victim, New Jersey resident Lenny Javier, slammed into the side of the oncoming train, but did not fall onto the tracks, cops said. She instead toppled backwards onto the platform, suffering severe injuries to her face and legs, including a broken nose and fractured chin.

Surveillance footage (see video below) released by the NYPD late Monday shows the bandanna-wearing suspect sitting on a bench on the platform just after 8 a.m. — and getting up to perfectly time her push as the train rolled in. 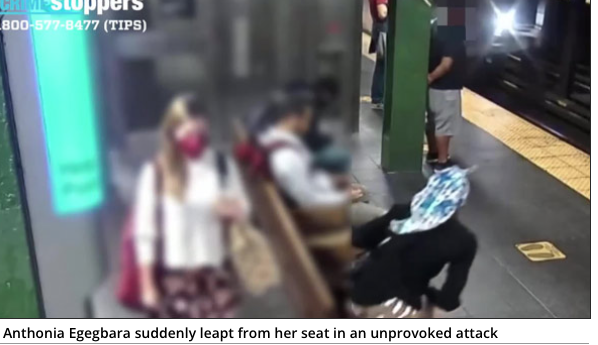 The victim slammed into the side of the oncoming train, but did not fall onto the tracks, cops said. She instead toppled backwards onto the platform, suffering severe injuries to her face and legs.  She was taken to Bellevue Hospital in stable condition, according to police.

The two women did not know each other, and the incident was unprovoked, cops said. Egegbara, of Far Rockaway, has a lengthy criminal record dating back 10 years, according to police.

Anthonia Egegbara, 29, was taken into custody at the same station where she allegedly pushed the 42-year-old victim from behind just as a No. 3 train pulled in a day earlier, police said. 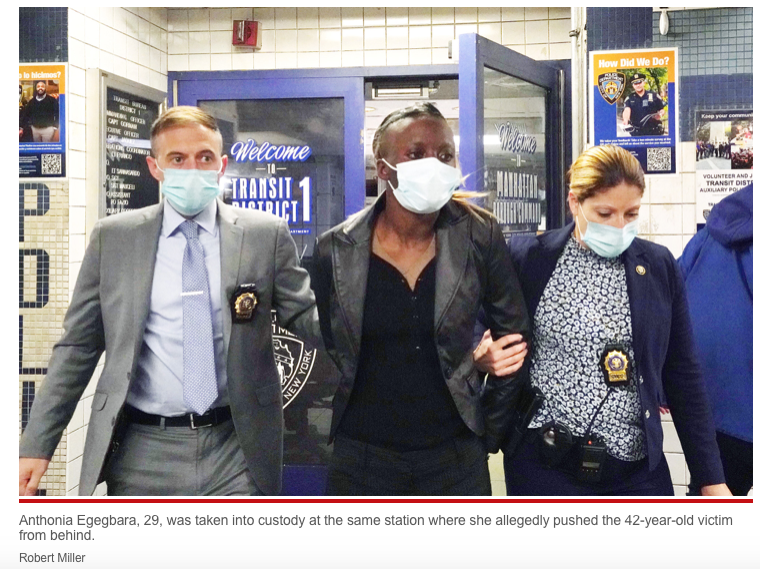 In September, she was busted for turnstile jumping, cops said. In July, she was arrested for allegedly scratching another woman, 40, in the left cheek during a dispute.

She was charged with grand larceny in April after she allegedly snatched a cell phone from someone’s hand and fled on a train, cops said.

n June 2020, Egegbara was busted for criminal mischief after she allegedly damaged a door with a hammer, authorities said.

In July 2019, she was arrested for another unprovoked assault in the Bronx in which she allegedly punched a 57-year-old woman in the face multiple times and kicked her when she fell to the ground.

Her earliest arrest came in November 2011, when she punched an 18-year-old female friend in the face numerous times — and bit her middle finger — in Brooklyn, police said.