A British Conservative lawmaker was stabbed to death in a church on Friday by an assailant who lunged at him during a meeting with voters from his constituency, a killing police are investigating as a possible terrorist attack.

RT (h/t Richard S) Metropolitan Police has officially declared the murder of Conservative MP Sir David Amess in Essex to be a terrorist incident, and put Counter Terrorism Policing in charge of the investigation.

“The fatal stabbing in Leigh-on-Sea has tonight been declared as a terrorist incident,” by Deputy Assistant Commissioner Dean Haydon, the Met announced late on Friday, adding that “The early investigation has revealed a potential motivation linked to Islamist extremism.”

Police said they believe the suspect acted alone, and are not seeking anyone else in connection with the incident at this time. Officers are currently searching two addresses in the London area as part of the investigation.

The murder of Sir David Amess in #Essex earlier today has now been declared as a terrorist incident, and the Met’s Counter Terrorism Command will lead the investigation.

TimesofIsrael David Amess, 69, from Prime Minister Boris Johnson’s Conservative Party, was knifed repeatedly in the attack at about midday in the Belfairs Methodist Church in Leigh-on-Sea, east of London.

Police confirmed “a 25-year-old man was arrested and a knife recovered.” A motive wasn’t given and the suspect wasn’t identified.  The suspect is being held on suspicion of murder, police said.

The attack occurred as Amess was holding his regular weekly meeting with constituents at the Belfairs Methodist Church in Leigh-on-Sea. 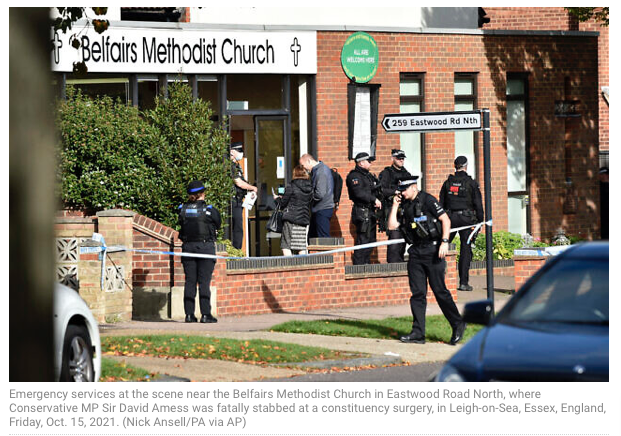 Amess had been a member of Parliament for Southend West, which includes Leigh-on-Sea, since 1997, but a lawmaker since 1983. He was a well-liked MP, known for a ceaseless campaign to have Southend declared a city.

He also sought various avenues in parliament to honor Swedish diplomat Raoul Wallenberg, who saved tens of thousands of Hungarian Jews during the Holocaust. In 1997, a statue of Wallenberg he had campaigned relentlessly for was unveiled in London by Queen Elizabeth II, Prince Charles and Israeli president Ezer Weizman.

Amess was the Honorary Secretary of the Conservative Friends of Israel from 1998, and was regarded as a longtime friend of the UK Jewish community. 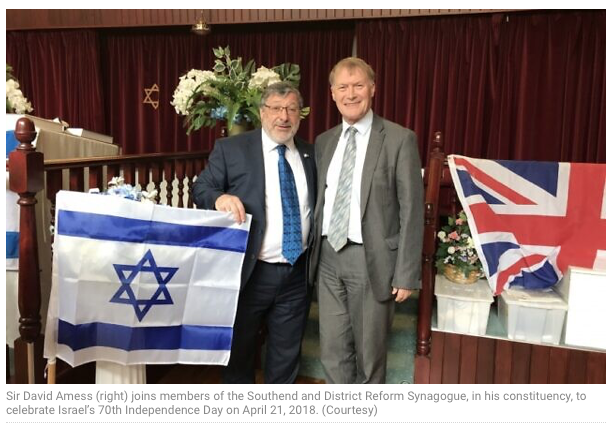 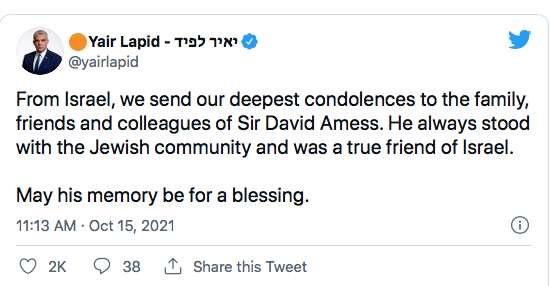 “Although I myself am not a Jew but a Catholic, there is Jewish blood in each and every one of us. I would certainly have been proud to have been born a Jew, and I stand shoulder to shoulder with our local Jewish community,” he said in the January speech.

Israeli Foreign Minister Yair Lapid wrote on Twitter that Amess “always stood with the Jewish community and was a true friend of Israel.”

Amess was knighted by Queen Elizabeth II in 2015 for his service, becoming Sir David.

Politicians from across the political spectrum expressed shock and sorrow at the death of Amess, who leaves a wife and five children. Flags at Parliament were lowered to half-staff.

British lawmakers are protected by armed police when they are inside Parliament, and security there was tightened after an attacker inspired by the Islamic State group fatally stabbed a police officer at the gates in 2017.