Video of the arrest posted online last week shows the woman being dragged by her hair through the streets of Tehran while seemingly snared by the catch pole, before being bundled into a ‘morality police’ van.

At the same time Joe Biden is releasing hundred of millions of dollars to Iran in hopes of re-opening the Trump-revoked disastrous Iran nuclear deal. 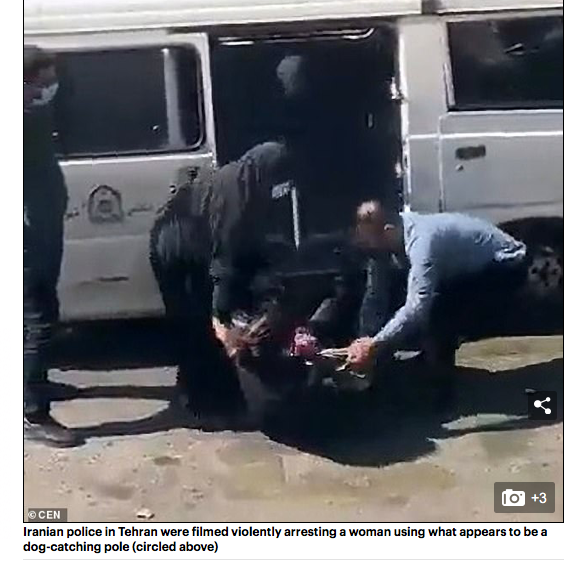 Daily Mail Masih Alinejad, a prominent Iranian women’s rights campaigner who uploaded the footage, said the woman was arrested for failing to wear a head covering – mandatory for women in the Islamic Republic. ‘Unveiled women [are accused] of prostitution or creating moral corruption,’ she said.

The footage, taken at an unknown location in Tehran, shows the woman – with her head exposed – being wrangled by security officers into the side of a van.

One female officer, who is fully veiled, can be seen grabbing the woman’s hair while another holds her arm and a third drags her using what appears to be a dog snare. The woman is then bundled into the van, hitting her head against the roof in the process, before the door is shut and the vehicle moves away.

Iran’s ‘morality police’ were established in the wake of the 1979 Islamic Revolution and tasked with enforcing strict social codes on the country’s civilians.

In 2019, Iran introduced 2,000 more morality officers to the streets specifically to tackle the campaign. While women have commonly been employed as morality officers, the new recruits included rare all-female squads.