Palestinian Authority President Mahmoud Abbas visited the Vatican on Thursday where he had a private audience with Pope Francis and claimed to Pope Francis that Israel is illicitly seizing church property. A Vatican press release described the talks as “cordial” and called for renewed peace talks towards a two-state solution. 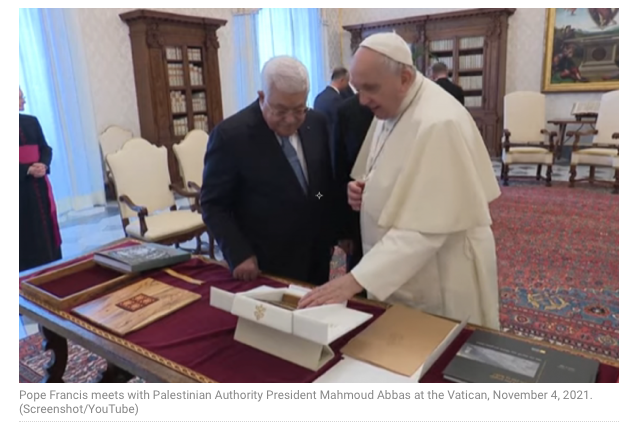 “With regard to the peace process between Israelis and Palestinians, it was stressed that it is absolutely necessary to reactivate direct dialogue in order to achieve a two-state solution, also with the help of more vigorous effort on the part of the international community,” the statement said.

“Lastly, it was reiterated that Jerusalem must be recognized by all as a place of encounter and not of conflict, and that its status must preserve its identity and universal value as a Holy City for all three Abrahamic religions, also through a special internationally guaranteed status,” it added. (In other words, Jerusalem should NOT be the capital of Israel as it has been for thousands of years)

According to the official PA-run Wafa News, Abbas “briefed” the pope on what what was falsely described as Israeli efforts to seize Palestinian and church property “including through fraudulent sales, particularly in the Old City of Jerusalem.” Wafa did not elaborate further.

The Vatican recognized the non-existent so-called “State of Palestine” in 2013. Later that year, Abbas made waves during a Christmas message when he insisted that Jesus was a Palestinian. While Israel criticized Abbas’ remarks, church officials were strangely silent.

Since the establishment of the Palestinian Authority in 1994, the Palestinian Christian community under PA jurisdiction has dwindled. Palestinian Christians complain of Muslim land theft, harassment of Christian women, Christian businesses being forced to pay protection money and discriminatory taxes, and frequent robberies and vandalization of churches. Christians also face kidnapping and forced conversions to Islam. They also accuse the PA justice system of providing no legal recourse.

The situation has led to a Christian exodus from the Holy Land, particularly in the town of Bethlehem. Before the PA was established in 1994, Christians were the majority of the population. Today, they number less than 20 percent.