Boris Johnson calls on France to smash slave gangs who are ‘getting away with murder’ as at least 31 illegal Muslim invaders including five women and a girl drown in deadliest-ever Channel crossing after French police sit and watch boats leave their shore. 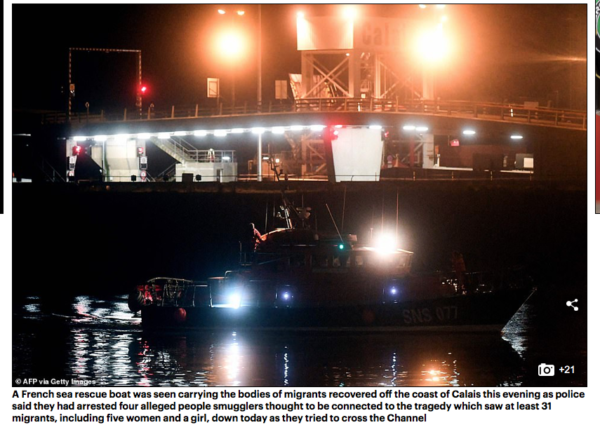 DAILY MAIL (h/t Chris B) Four alleged people smugglers thought to be connected with the disaster were arrested by police north of Dunkirk, near the France-Belgian border, this evening after tragedy struck shortly around 2pm when an ‘overloaded’ boat capsized in rough seas amid rain and cold weather and was found by fishermen, with three coastguard vessels and a helicopter rushed to the scene.

The 31 deaths are the biggest single-day loss of life from migrant crossings in the Channel, with the previous grim record believed to be a family of five Kurdish-Iranians who drowned in October last year. Before the accident, a total of 14 people had drowned this year trying to make it to Britain.

Mr Johnson chaired an emergency Cobra meeting this afternoon as a search and rescue effort continued after the disaster amid anger from Tory MPs over soaring numbers of migrant crossings from France – with nearly 27,000 Muslim invaders landing on the south coast this year. 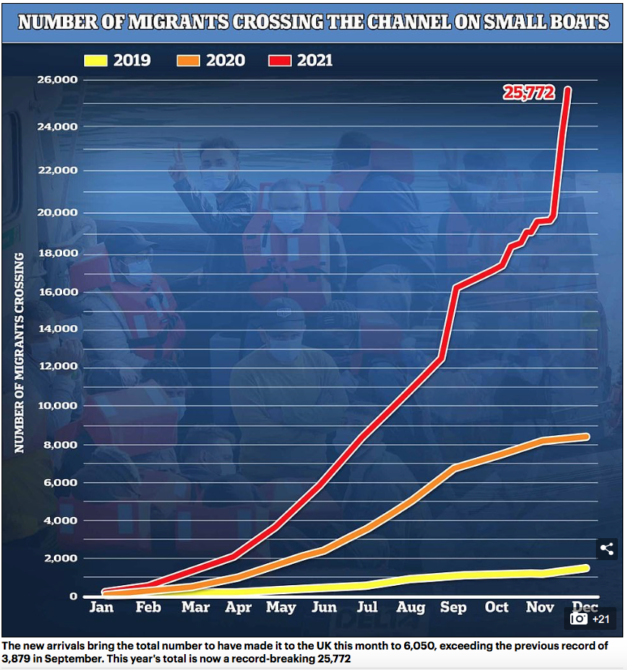 The Prime Minister said he was ‘shocked, appalled and deeply saddened’ and that the UK needed to work with ‘our French friends’ and the rest of Europe to address the crisis. ‘I say to our partners across the Channel, now is the time for us all to step up, to work together, to do everything we can to break these gangs who are literally getting away with murder.’  (Hey Boris, shut your damn borders!)

Mr Johnson also criticised Mr Marcon’s Government, saying there had been ‘difficulty persuading some of our partners, particularly the French, to do things in a way we think the situation deserves’. (France should shut its damn borders to the illegals, too!)

French prosecutors have opened a manslaughter enquiry over the deadly crossing, thought to have been organised by a criminal gang who – if caught – face charges of ‘manslaughter’ and ‘assistance with illegal immigration in an organised gang’, a spokesman for Dunkirk prosecutors said. 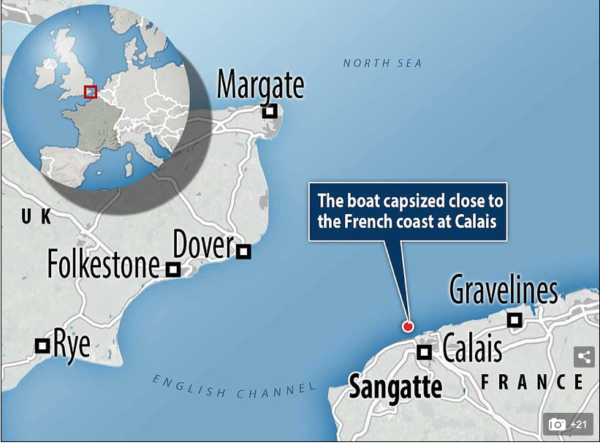 MP for Calais Pierre-Henri Dumont branded the Channel ‘the new Mediterranean Sea’ and said it was ‘like an open sky graveyard.’ He said migrants should be moved from Calais to the middle of France – even if by force – because they will continue to try to cross the English Channel as long as they are on the coast.

London’s Muslim Mayor Sadiq Khan said it was an ‘utter tragedy’ and urged the Government to work with French authorities to provide safe routes for those seeking sanctuary. (Therein lies the problem)

Meanwhile Labour Leader Keir Starmer said: ‘For lives to be lost in such dangerous and desperate circumstances is a devastating and heartbreaking tragedy. The UK Government, France and the wider international community have a duty to prevent people from being forced into such peril.’

Former UKIP leader Nigel Farage was today filming in the Channel with GB News days after he confirmed he was considering a return to frontline British politics as he accused the Government of failing to ‘get a grip’ of migrant Channel crossings.