PA Chairman Mahmoud Abbas: “The Arab Liberation Army retreated from the city [Safed in 1948], causing the Arab people to begin emigrating. In Safed, just like Hebron, people were afraid that the Jews would take revenge for the Arab massacre of Jews in 1929 in Hebron.

And contrary to what the world media outlets tell us, the Jews actually encouraged the Arabs to stay in 1948.

Arab man: It was the Arab regimes that told us to get out of Jerusalem in 1948. Radio stations kept repeating: “Get away from the front lines. In a week or two, the Jews will be gone and we will bring you back.

Israeli-Arab MP curses Arab leaders who told Arabs to leave Israel in 1948 or else they would be considered traitors. He blames Arab leaders for making his parents refugees.  Ibrahim Sarsur, then Head of Islamic Movement in Israel, now MP said: “The one who gave the order forbidding them to stay there bears guilt for this.”

We always hear that 1948 was the Nakba (Catastrophe) were Arabs falsely claim that they were driven out of Israel by the Jews.

What we never hear about is the Jewish Nakba, where Jews from Arab countries were, in many cases, stripped of their citizenship, beaten, had their land stolen by Arab governments, and in many cases were killed.

850,000 Jewish refugees from Arab countries were expelled between 1948 and 1978. Many of these Jews fled to Israel to make a new life. There is no “right of return” for these refugees, and the Arab countries who expelled them have never made reparations. In contrast, Israel did not expel Arabs from the land, in fact, many fled of their own accord, due to a war they themselves initiated. Additionally, Israel has made many efforts to accommodate Arabs from British Palestine. 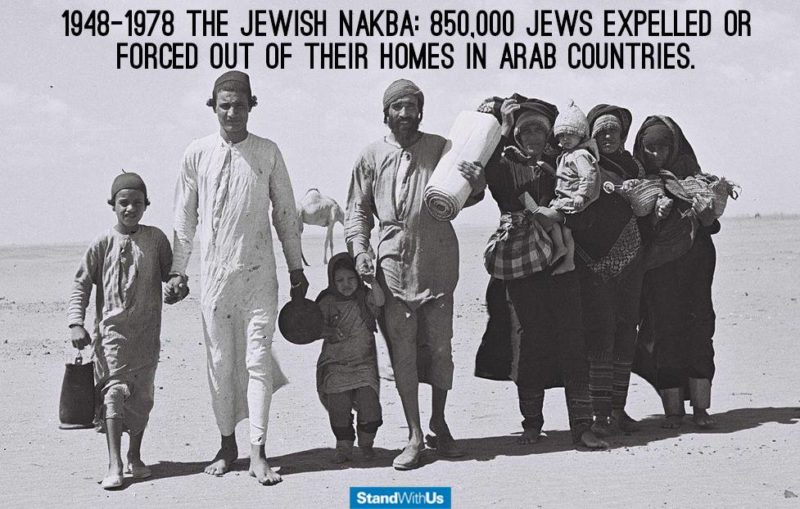