NIHAD AWAD’s Islamic radicalism was exposed Saturday when he called Tel Aviv “occupied” and prayed for it to be freed. His reference to an “occupied” Tel Aviv revealed that he does not even accept Israel’s right to exist.

“We have to fight. We have to take the fight to the other side. Moving the [U.S.] embassy, OUR embassy, from Tel Aviv which is occupied, to a city [Jerusalem] that’s supposed to be protected under international law, to move that embassy we should not accept that as a de facto,” Awad said. “We have to pressure the administration to take our embassy back to Tel Aviv. And inshallah [God willing], it will be free later.” 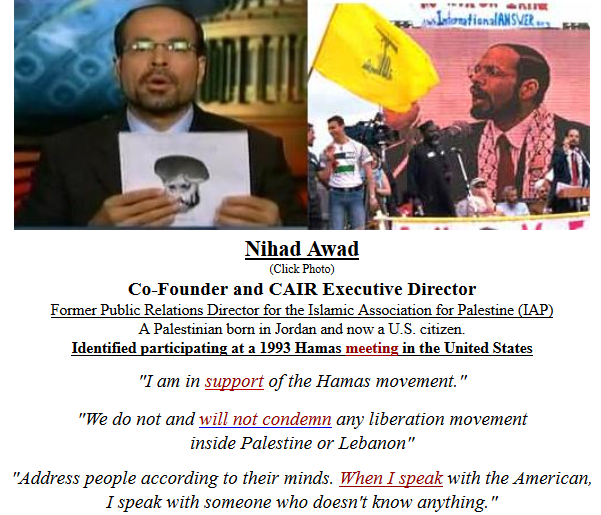 Gil Troy, a distinguished scholar in North American history at McGill University who also writes on anti-Semitism, told the Investigative Project on Terrorism he was “deeply grateful” for Awad’s comments.

“Mr. Awad was being honest – unlike most of his comrades,” Troy said. “His brutal honesty – which essentially calls for a new anti-Jewish genocide 75 years after Auschwitz – exposes the lie that Palestinian extremists like him would be satisfied with any kind of compromise. It makes it clear that the hatred against Israel has to do with what Israel is – a Jewish democratic state – not what Israel does. And it should confront many Americans – including some deluded Jews – with the uncomfortable facts that this main obstacle to peace in the Middle East is not Israel’s presence in the territories, but Palestinian fanatics’ rejection of Israel’s presence – period.”

For years, AMP conferences have featured speeches challenging Israel’s legitimacy. Awad did just that in 2019, casting Zionism as inherently hateful. At CAIR, he said, “we deal with racism, Islamophobia and Zionism on [a] daily basis.”

Awad was among 25 members of what federal prosecutors described as “Hamas’ support network in the United States” who met over a 1993 weekend conference in Philadelphia to strategize ways to “derail” the American-led Oslo Accords. “We’ve always demanded the 1948 territories,” meaning all of Israel, said Omar Ahmad, Awad’s co-founder at CAIR.

“This kind of essentialist, irrational hatred, certainly fits Professor Judea Pearl’s definition of ‘Zionophobia,'” Troy said, “meaning the irrational, obsessive hatred of Israel, reflecting a desire to destroy the Jewish State (which would kill 7 million Jews and 2 million Arabs). And it sits on centuries of more traditional Jew-hatred, resonating with haters obsessed with Jews and now the collective Jew, Israel.

So I thank Mr. Awad for this Hanukkah ‘present,’ this reminder that Jews, who fought for their freedom against a brutal dictator 2,000 years ago, still face brutal dictators today, who show as much contempt for Jewish life in Tel Aviv (and elsewhere) as they do for democracy itself.”

It was at AMP’s 2018 conference that Zahra Billoo, CAIR’s San Francisco chapter leader, said that “I am not going to legitimize a country that I don’t believe has a right to exist.” 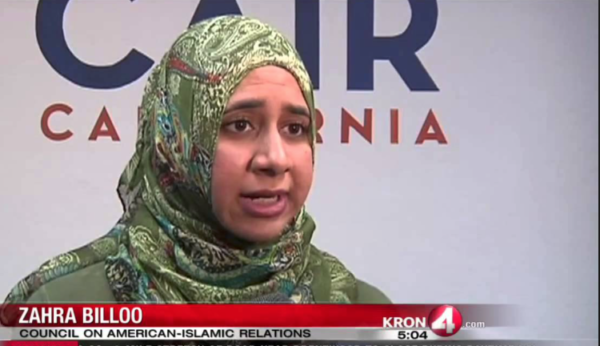 Billoo also spoke at last weekend’s AMP gathering. Her blind hatred for anyone who supports Israel prompted her to reject overtures from and shun what she described as “polite Zionists” even on issues on which they might work together. She blasted me and Middle East Forum founder Daniel Pipes as “vehement fascists,” but warned that any groups supporting Zionism “are not your friends.”

Those who advocate for a two-state solution – one that leaves Israel intact – “are your enemies,” she said moments later. “There are organizations and infrastructures out there who are working to harm you. Make no mistake of it. They would sell you down the line if they could. And they very often do behind your back. I mean, the Zionist organizations, I mean the foreign policy organizations who say, they’re not Zionists, but want a two-state solution.”