At least 100 Muslim male invaders started a brawl at a public swimming pool causing German women and families to flee. What began as a friendly water pistol fight turned into a brawl with the Muslims screaming at each other and then attacking each other.

Jungefreiheit (h/t Hartmut)  The police moved in with 13 radio vehicles and parts of a hundred units. After the incident, four suspects between the ages of 15 and 23 are being investigated. One of them hit a security guard at the pool, who then had to be treated at the hospital. A ten-year-old boy who got caught in the raging crowd was also injured with a blow to the head.

This is not the first incident of this kind that has prompted the police. An increased number of sexual assaults in outdoor pools has also caused outrage in recent years. 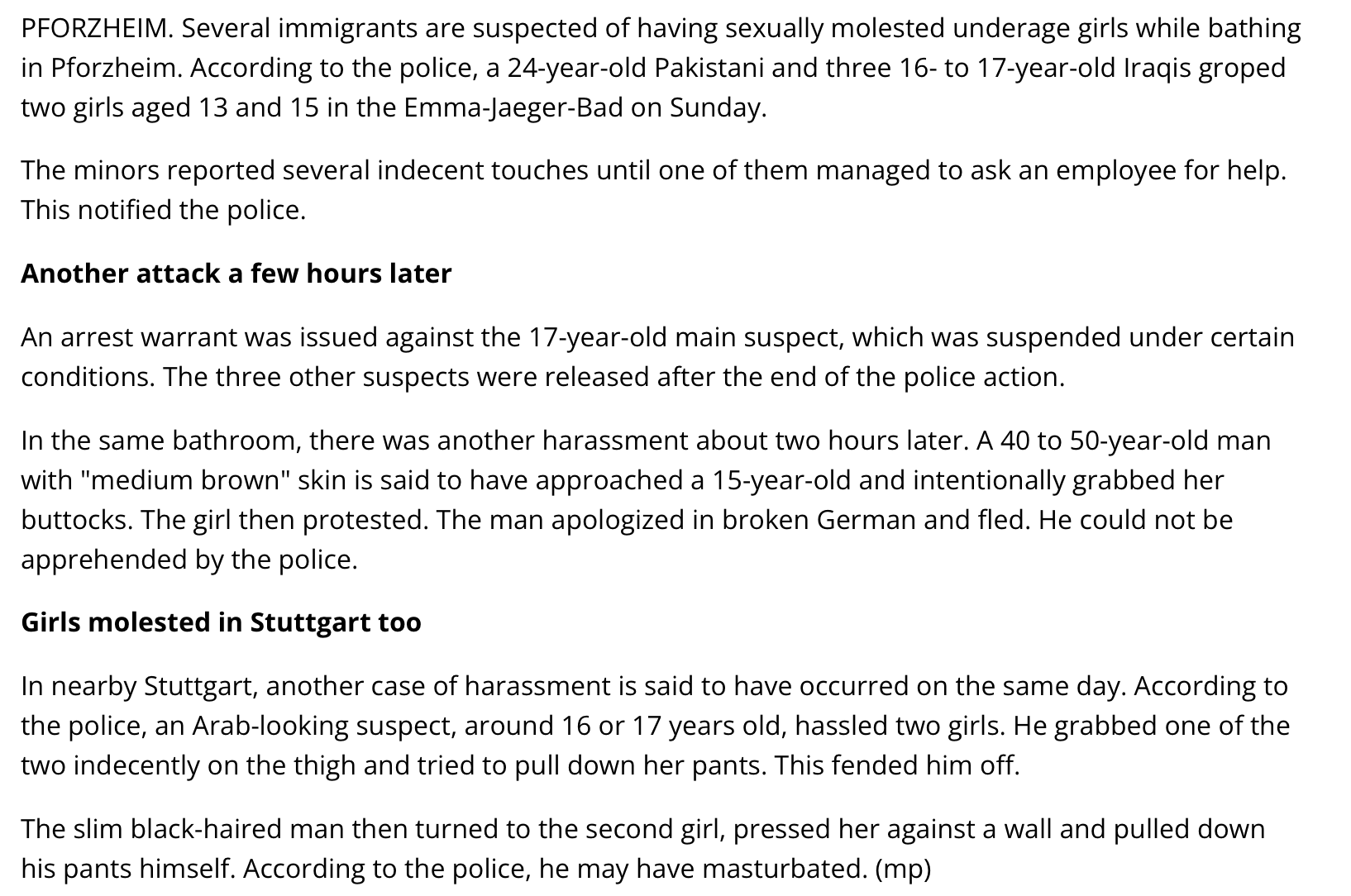 A Düsseldorf swimming pool had imposed an ID requirement in response to aggressive migrants . In the past, the swimming pool association has called for tough action against violent offenders. (quote) 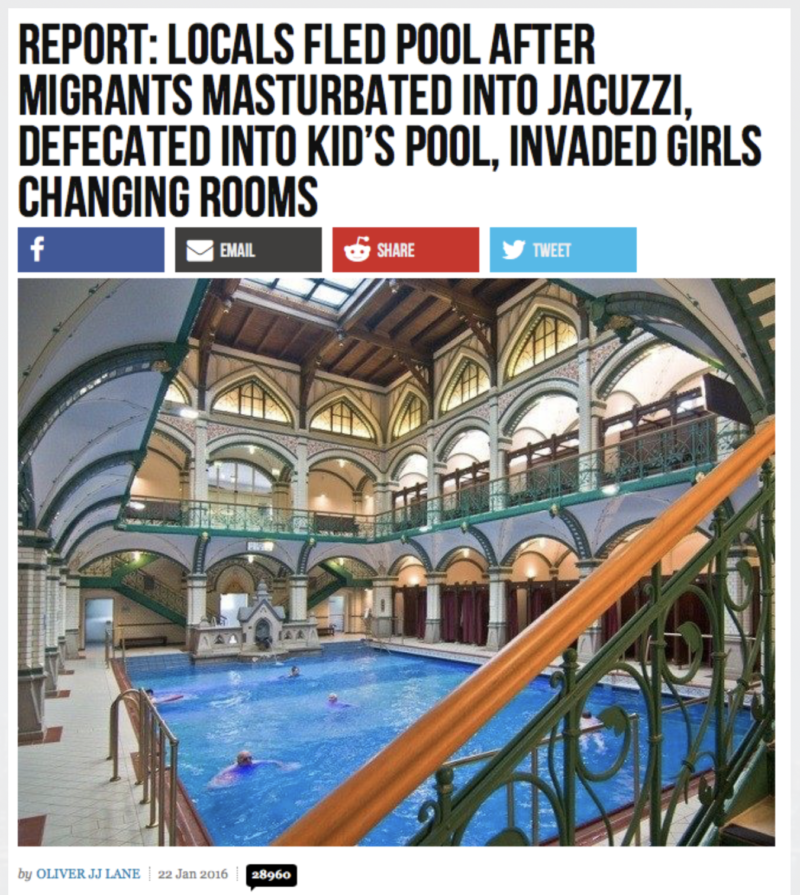 Breitbart A German swimming pool has banned migrants from entering the premises after a group of Muslim migrant men went on an obscene rampage, laughing in the faces of pool staff when challenged about their grotesque behaviour. 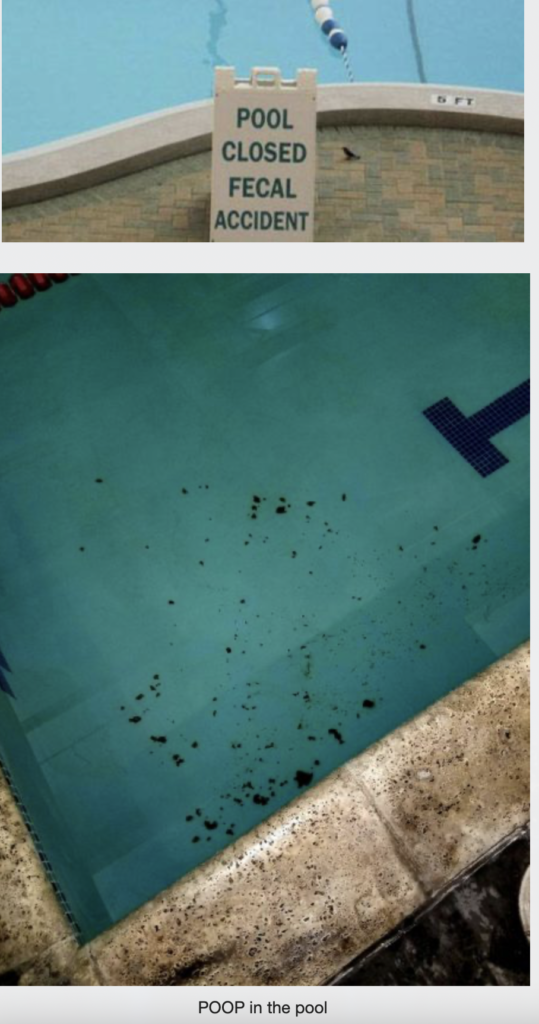 The allegations against the migrant bathers has come to light thanks to a leaked internal letter from the Zwickau Town Hall, between the chief clerk to his department head, reproduced in part by German tabloid Bild. Writing of the historic swimming pool’s decision to close their doors to migrants until further notice, Rainer Kallweit wrote this week of a shocking incident which has left the baths abandoned by local swimmers.

“An asylum seeker has masturbated in the hot tub and ejaculated into the basin. This is also recorded on the surveillance camera”. He wrote that the group desecrating the jacuzzi, having been thrown out by the lifeguards later returned took “selfies” of themselves while they were in the tub, “jeering” the whole time.

Writing of another pool under his jurisdiction in the down of Zwickau, the town employee continued to say a group of “young unaccompanied women and children” used the children’s training pool, as none of the party could swim. He wrote, in classic civil servants language they “contaminated the pool by getting rid of the contents of their intestines. Native people immediately left the pool”. 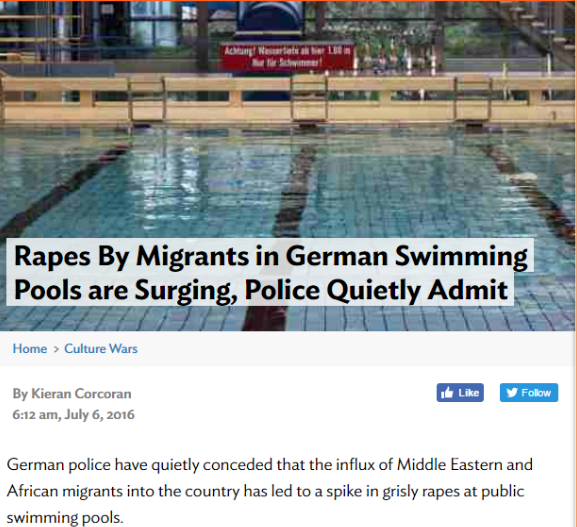 This was not the only assault on the pool. The day before, wrote Mr. Wallweit “8 foreign men … in the sauna” harassed locals, forcing pool staff to pretend the Sauna was out of action when enquiries were made my migrant men, if there were at that time local women using it. He told his superiors: “furthermore, the lifeguards have to protect women and girls from the asylum seekers. Young men wanted to forcibly penetrate the female changing room”.

This behaviour in Zwickau is not by any means unique in Germany. Breitbart Londonhas reported on a number of sex attacks on children in swimming pools, with girls as young as 11 and boys as young as three being targeted by migrant gangs. 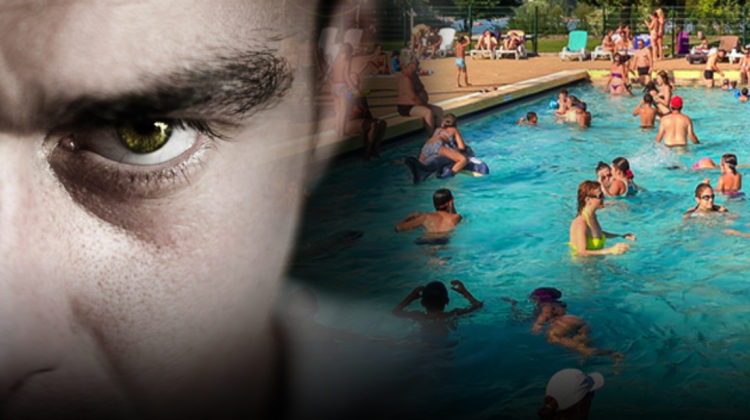 Breitbart  Police arrested the group of Syrian asylum seekers at the Herrenmannsbad outdoor swimming pool on Friday. Two of the men, aged 31 and 27, are said to have filmed several underage girls at the facility against their permission and then tried to sexually touch them in the swimming pool, MDR reports.

“Two asylum seekers, or perhaps four, have bothered girls there. They also made videos and that is the charge. We are now awaiting the investigation of the police and the prosecution,” said the mayor of Löbau Dietmar Buchholz.

The asylum seekers are said to have used their mobile phones to film the young girls. When one tried to physically molest a girl, the lifeguard on duty told him to stop and then called the police.

Police say the 31-year-old migrant was filming the girls whilst his 27-year-old fellow countryman was the one who molested several children in the pool itself. A 19-year-old and a 21-year-old are currently being treated as witnesses to the alleged crimes.

Many cities and pools have tried various methods to reduce the number of sex attacks by migrants at swimming pools. Some have tried banning asylum seekers altogether but have faced immense opposition by left-wing, pro-migrant groups. 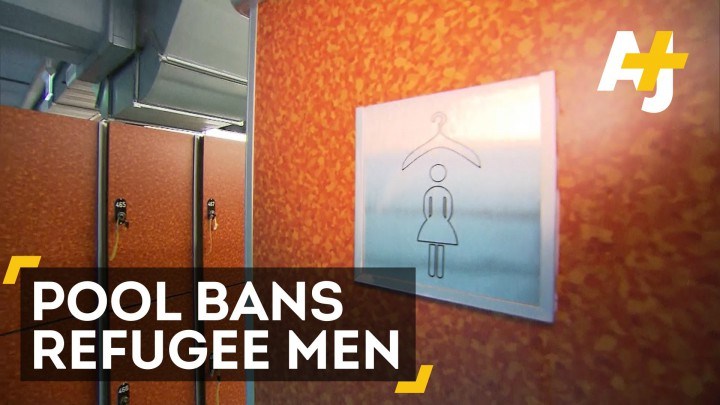 Since 2015 there have been a high number of sex attacks in swimming pools in Germany and Austria. The most notorious attack occurred in Vienna when an Iraqi asylum seeker brutally raped a young boy in the pool changing room, the migrant claiming he was having a “sexual emergency”. He recently had his sentence reducedby a judge who deemed the seven years he was meant to serve as being too harsh. 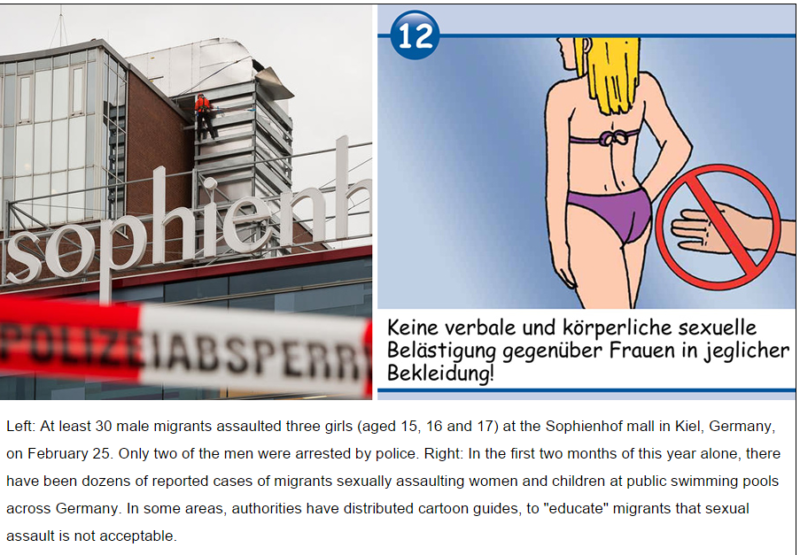 The young Muslims were harassing visitors, shouting and splashing into the pool. Two of them ultimately got into fight with one another, running over towels of other pool-goers. The two were confronted by a man, who attended the pool alongside his wife and children. The father – reportedly of Turkish origins – scolded the rowdy bathers, while referring to them as “Nafris.”

The controversial term is a police abbreviation, meaning “North African Intensive Offenders,” and became public knowledge after the 2016 New Year Eve mass sexual assaults in Cologne. It has been condemned by critics as a racial slur.

The rowdy pool goers were among those who took offense, and they confronted the family in large numbers, triggering the police arrival. Several officers were deployed to the scene, yet failed to defuse the situation. The law enforcement was met with angry remarks from the crowd, pelted with empty bottles and other objects. Reinforcements were dispatched to the scene and the police was ultimately able to get the situation under control, escorting the family out of the pool.

Following the incident, the pool’s management decided to shut down the establishment prematurely. While the pool reopened on Sunday, it was closed early yet again over more rowdy African Muslim pool-goers. Few details on the second incident have emerged, aside from local media reporting it was “similar” in nature to the one on Saturday and involved the same group of rowdy swimmers.

ILLEGAL ALIEN MUSLIM INVADERS pretending to be asylum seekers have carried out another group sex attack in Germany, this time attacking at least five girls aged between 10 and 14 at a public swimming pool in Kirchheim.

NEW OBSERVER  Police identified all the attackers as “young men from asylum seeker circles” and of “Arab” appearance. According to an article in the Stuttgarter Nachrichten, the police were called to the swimming pool in the Kirchheim/Teck (Esslingen district) on Wednesday afternoon after they received reports of “several sexual assaults, and injuries.”

Police spokesman Sven Heinz confirmed to the paper that the attackers were from “asylum seeker circles,” and he said, “to judge from their outside appearance,” of an “immigrant background.” 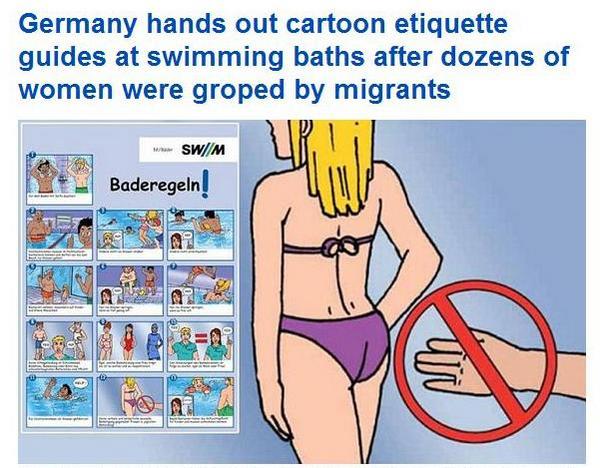 Police spokesman Sven Heinz confirmed to the paper that the attackers were from “asylum seeker circles,” and he said, “to judge from their outside appearance,” of an “immigrant background.” The police report said that all of the girls had had their bikini tops and pants ripped from their bodies, and their private parts groped.

One of the girls fled in tears when “a 25- to 30-year-old man rubbed his erect penis on her body,” Heinz added. “All of the girls were highly traumatized.” Witnesses managed to identify one of the attackers, a 21-year-old “asylum seeker” from Iraq, who was promptly detained for attacking an eleven-year-old.

Another suspect, described as “in his early 20s,” was detained by lifeguards at the pool, but in the ensuing tumult, managed to slip away.

Eleven of the attackers were described as “speaking Arabic,” Heinz continued, adding that police had issued an appeal for other possible victims to come forward. The police were first summoned to the pool on account of the behavior of an invader “asylum seeker” from Mali who, along with 30 others, had engaged in assaults and attacks on other bathers and lifeguards.

The Malian, who claimed to be 17-years-old—but who overpowered and injured two officers before reinforcements arrived—had got into a standoff with lifeguards who had called the police. It was while investigating this attack that the young girls’ parents came forward to report the sex attacks.

Green Party Kirchheimer mayor Angelika Matt-Heidecker—whose party’s policies are the cause of the assaults—said she was “appalled” by the attacks. “We will have to crack down,” she told the Stuttgarter Nachrichten. “It is unacceptable that parents have to be afraid to let their children go to the swimming pool.” Her answer to the attacks is to make sure that there are “security guards” present at the pool in the future, she added. 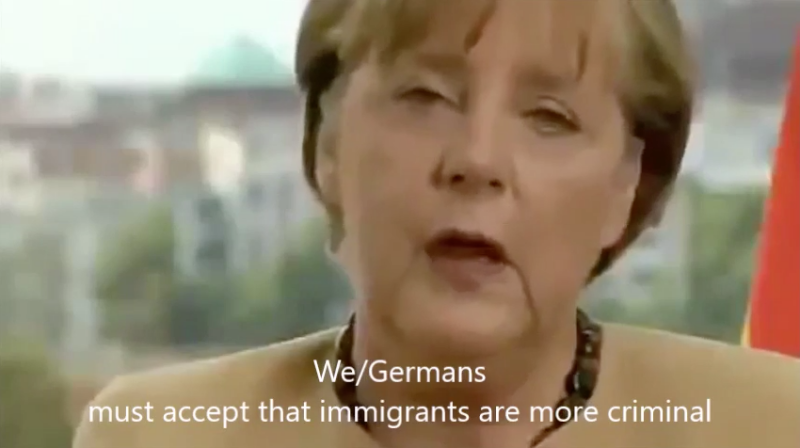