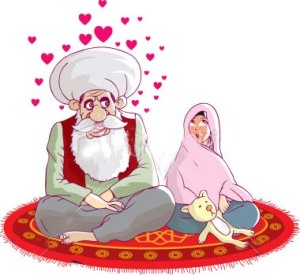 According to hospital officials, Saima was brought in with over 46% burn wounds and was in critical condition. Her father spoke to police officials and recorded a statement but now they have both fled. “She may not survive for long without medical assistance,” said the doctor.

EXPRESS TRIBUNE  On being contacted, Medical Superintendent DHQ Jhang, Dr Mumtaz Hussain told The Express Tribune that when the doctors visited the ward in the morning Saima was present on her bed but soon after her father, Muhammad Ijaz took her away. “He told me to tell the doctors he was taking her to a police station but the police are searching for them too,” said a patient in the bed next to Saima’s.

Satellite Town Police Station House Officer (SHO) Sajjad Ahmad Cheema said that the victim and her father had not appeared in the police station. Cheema said that Muhammad Ijaz had recently filed a complaint regarding his daughter’s acid attack and accused his nephew, her husband. “We registered the case and he was summoned to appear before the court on Friday afternoon in the presence of the accused party, including his brother and nephews,” Cheema said. “We have arrested all the accused nominated in the FIR,” he added.

Ijaz told police officials that he was a labourer and had divorced his first wife seven years ago. Saima was his

daughter from his first marriage and she was living with his brother Muhammad Yusuf in Muddaki. “I sent her to a study at a madrassah and she was staying with my brother. A few months later my brother asked to wed her to his ten-year-old son Ahmed and since they were both the same age, I agreed to the match,” Ijaz told police.

“They beat her and were very cruel to her. On October 26, I went to visit her at my brother’s house and when I saw her I saw the burns on her face. She denied that she had been attacked at first but later told me her husband and his brothers Mohsin Ali, Ehsan Ali and Noor Muhammad had thrown acid on her. They kept saying it was a skin condition,” he told police. 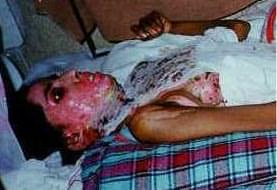 Ijaz said that his sister Mumataz Bibi told him about the incident and said that Ahmed would attack her again if he didn’t take his daughter away.

“I took her away but then they came to my house while I was gone and attacked my daughter. The doctors have issued a medical report saying she has been burned. They said she would recover and the wounds weren’t critical,” he said.

Ijaz told police officials that his brother and his family were 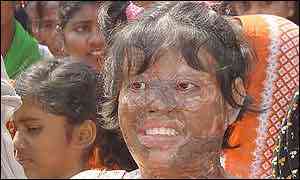 threatening him. Sattilate Town Police registered a case under Section 324, 337-A/1, 337 A/2, 337/L2 of the Pakistan Penal Code against Saima’s mother-in-law Kaneez Fatima, father-in-law Muhammad Yousaf, spouse Ahmed and brothers-in-law Mohsin and Asif.

SHO said the accused had been arrested on Friday evening adding that further investigations were underway. “We cannot complete the investigation until we know where Saima and her father are. Their testimony is key,” Cheema said.