A Muslim man who suffered from ‘dogophobia’ drowned after he fled in terror from a Staffordshire Bull Terrier, straight into a lake. Muslim disdain for dogs is well-known, never more apparent than in European neighborhoods where non-Muslims’ pet dogs seem to ‘mysteriously’ drop dead of poisoning. UK DAILY MAIL  Mohammed Faisal, 24, died after he jumped head-first into a bush which stood next to the lake. The inquest heard that the dog’s owner Ritchie Frost did his best to assist Mr Faisal, who could not swim, but that he died after the lake plunge on September 28, 2011.

Mr Faisal, from Millfield, Peterborough, had been walking home when he was scared by a Staffordshire Bull Terrier called Locki, which was being walked by Mr Frost and his children.

In a police statement read out to the inquest Mr Frost, from the Fletton area of Peterborough, said he had taken the dog off its lead and was alerted to Mr Faisal’s presence after hearing a ‘scream’ from around a bend in the path.

Mr Frost said he saw Mr Faisal dive head-first into a bush towards the lake. The dog tried to ‘trot’ after Mr Faisal, but obeyed when Mr Frost called it back.

The hearing was told that Mr Frost went over to the bushes and the edge of the lake to reassure Mr Faisal that his dog was ‘friendly’. He saw his head ‘bob’ above the water before it disappeared beneath the surface and did not reappear. 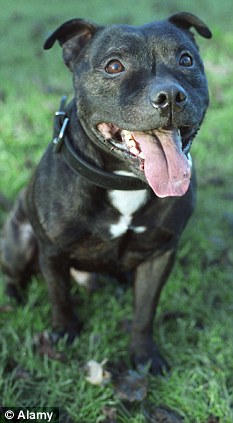 The inquest heard evidence from Samantha Persaud, who was Mr Faisal’s work colleague at the call centre and had been walking behind him on a footpath near to the lake just before his death. In her statement to police she said she briefly lost sight of Mr Faisal after he walked around a bend but he then reappeared, running past her looking ‘scared’ before hiding in a bush.

Ms Persuad then saw a dog as well as a nearby man and woman. She said: ‘The dog appeared to be ambling along paying no attention to anything.’ She felt that Mr Faisal was ‘afraid’ of the dog but she did not feel there was a threat as the animal had a ball in its mouth throughout the whole incident and was not barking or growling, and so she continued on her journey.

The coroner also heard evidence from Detective Sergeant David Liddle, who told the court that there was no record of aggressive behaviour in the dog’s past according to its vet.