Police say a woman who was killed by a co-worker at a food distribution center in suburban Oklahoma City was beheaded and another woman stabbed by Muslim employee. Witnesses say the suspect had been trying to convince co-workers to convert to Islam. More would have been attacked had he not been stopped by the COO of Vaugham Foods who was armed.

CBS (h/t Zilla)  Colleen Hufford, 54, was beheaded and another woman, 43-year-old Traci Johnson, was stabbed. Both victims were employees of Vaughan Foods, but according to Lewis, it appeared the women were not targeted and were instead stabbed at random.

Moore Police Sgt. Jeremy Lewis said Friday that 30-year-old Alton Nolen had been terminated from Vaughan Foods in Moore, where he worked as a production line employee, shortly before the incident took place on Thursday afternoon.

Lewis said Nolen exited the building after being fired and went to the parking lot where he drove his vehicle to the front of the business and hit another car. Nolen then walked into the front office and began attacking a woman with a standard knife used in the business, Lewis said.

Mark Vaughn, an off-duty officer who also serves as chief operating officer of the business, shot Nolen as he was stabbing Johnson.  Sgt. Lewis touted Vaughn as a hero Friday and said he saved Johnson’s life.”It could have gotten a lot worse. This guy wasn’t going to stop,” said Lewis.

Johnson and Nolen were still hospitalized Friday and were said to be in stable condition. According to Lewis, statements were made to investigators that Nolen had recently converted to Islam and had been trying to convince employees to convert to as well. The FBI is involved in the investigation and is currently conducting a background investigation into Nolen, Lewis said. According to the Oklahoma Department of Corrections website, Nolen has a criminal history dating back to 2006 that includes charges of possession of a controlled substance and assault and battery on a police officer.

He was imprisoned from April 2011 to March 2013 and is currently listed as being on probation.

The Department of Corrections describes Nolen as having several tattoos, including a picture of Jesus Christ on his chest, praying hands on his arm and an inscription on his abdomen that says, “As-Salaamu Ataikum,” an Arabic greeting often used by Muslims translating to, “Peace be upon you.”

Western Journalism  Alton Alexander Nolen, a 30-year-old Oklahoma man, was fired from his job at a food processing plant in Moore, OK, just before a bloody rampage began — one that has authorities seriously looking into whether Nolen’s reported conversion to Islam may have played a part in the gruesome crimes they allege Nolen committed.

CNN reports that Police Sgt. Lewis has also confirmed for reporters what had been suggested in earlier news accounts of the horrific beheading — that the suspect was apparently a recent convert to Islam who tried to get others in the plant to convert as well:

A report on foxnews.com supports the information that the suspect was a Muslim convert:

FBI officials are investigating a beheading at an Oklahoma food distribution center after co-workers said the suspect tried to convert them to Islam after his recent conversion.

UPDATE: Oklahoma Muslims don’t care about the victims, they are only concerned with the potential backlash they might face.

FOX News (h/t Opinionator)  Saad Mohammad, a spokesman for the Islamic Society of Greater Oklahoma City, told NewsOK.com that leaders of the society’s mosque are taking security precautions to protect Muslims who gather there from any potential retaliatory violence.

Mohammad said anti-Muslim sentiments local residents may have could be heightened due to the beheadings and violence overseas by Islamic State militants. (One can only hope)

“They have this ISIS thing on their minds and now this guy has brought it to America,” Mohammad told the website. 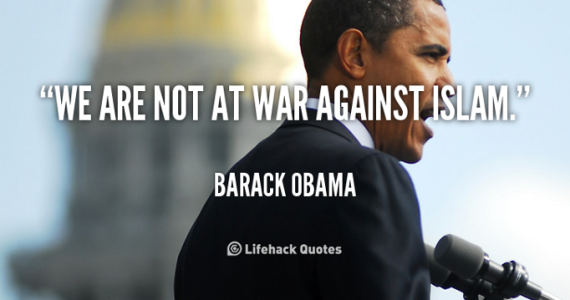