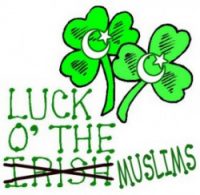 Qatar, one of the leading funders and supporters  of global Islamic terrorist networks, has received the go-ahead to build a gigantic ‘mosquetrosity’ and Islamic center in Clongriffen, North Dublin. The mega-mosque will become Ireland’s largest jihadist indoctrination and training headquarters, compliments of the Irish Government.

The €40 million development will see the construction of a mosque and cultural centre, conference centre, primary school, secondary school, fitness centre and eight apartments. The mosque will house up to 3,000 headbangers at a time, and make Dublin a hub for homeland and international terrorist attacks. Get ready to see massive white flight away from the area as soon as Muslims begin their inevitable infestation of the area.

Muslim immigration is behind a growing surge in ‘white flight’ away from Dublin.  The indigenous Irish are being displaced from their homes as a result of unimpeded immigration from North African and Middle Eastern Muslim nations. And they fleeing the city in droves.

A Muslim website that calls for the imposition of ‘Sharia’ Islamic law in Ireland is targeted at what it calls Irish “O’Muslims,” according to the Muslim Public Affairs Council (MPAC) website.

Irish Central  Sharia refers to the “way” Muslims should live or the “path” they must follow. Sharia is derived from the sacred text of Islam (the Koran) and traditions gathered from the life of the Islamic prophet Mohammed. Muslims believe sharia law should take preference over man-made (Western) law. An editorial post says introducing Sharia is a patriotic duty. “And who could doubt that establishing the authority of Allah in the land is in the best interests of Ireland?” it asks.

The site says it seeks “to remove injustice and establish fairness, to remove moral degradation, immorality and licentiousness and establish propriety, righteousness and restraint and to establish tawheed (the worship of the Only One worthy of worship) are surely noble Islamic aims.” The website also described the recent crucifixion of a pedophile and murderer in Saudi Arabia as “justice.”

MPAC spokesman Liam Egan, who goes by the Muslim name Mujaahid, said the independent website was not affiliated with the Irish Council of Imams or any other Muslim organization here and was run by a “volunteer group of indigenous Muslims”.

“From a religious perspective we believe we represent a mainstream Islamic position… considering the specific content and its limited relevancy [a minority group in Ireland] we have witnessed an exponential rise in site hits, last month we had 269, 733,” he told the Sunday Tribune.