Leftists and Gay Rights groups decry the parade as “racist.” (What “race” is Gay?) No, this is not satire.  On July 29th, a gay pride parade is scheduled in Sweden. But as you have probably surmised, this is no ordinary gay pride parade teeming with enthusiastic supporters and cheering leftists. This one will march through hostile territory – neighborhoods that have been infested with Muslim immigrant colonizers.

Blazing Cat Fur  This gay pride parade was created by Jan Sjunnesson, former editor-in-chief for the Samtiden newspaper in Sweden, which is owned by the nationalist Sweden Democrats party (Sweden Democrats in America would be considered Conservatives, which means that they’re considered “extreme far-right” in Sweden). The parade is scheduled to go through Tensta and Husby – two areas where Muslim immigrants are more than 75% of the population. (UH OH) 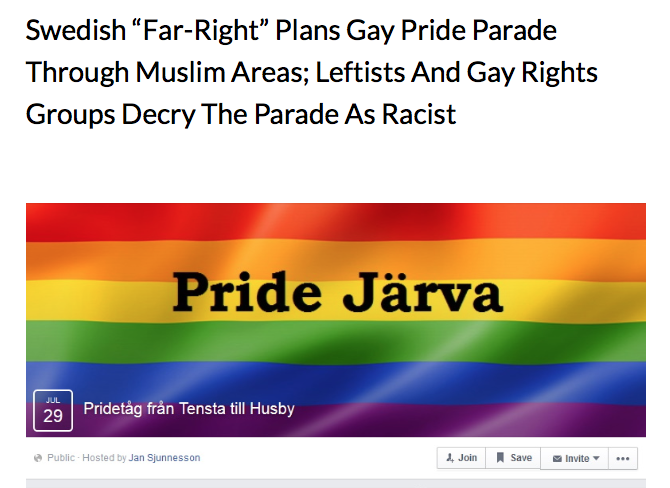 On the event’s Facebook page, the organizers state that there will be public “kissing” and “singing.” Not to mention swishing and flouncing in festive gay attire.

The Facebook page is absolutely filled with angry comments from leftists, attacking the “xenophobic right-wing nationalists” for organizing a gay pride parade through Muslim areas. Since Islam holds that gays should be executed, something like this is obviously an attack on Muslims and should therefore be outlawed. At least, that’s what Swedish leftists – and, indeed, Swedish gays – are saying.

Leftists are organizing a counter-demonstration against this gay pride parade. Yes, really.

Plans to organize a Pride Parade between Tensta and Husby in northern Stockholm has leftists up in arms, who are now planning a counter-demonstration.

To place an LGBT parade to the suburbs dominated by immigrants from the Middle East, however, is an expression of pure racism, according to critics. Noah North and Emelie Mårtensson, who themselves live in the Järva area, has decided to organize a counter-demonstration against the “Järva Pride”. They argue that the parade “pits two oppressed groups against each other.”

He now writes itself into a pattern that we have seen from other countries, to make racist points. It is in this context that one must see this, says Ulrika Westerlund, chairman of RFSL. RFSL, for those who don’t know, is a taxpayer-funded gay rights group (one of the oldest gay rights groups in the world, established in 1950), and they have publicly attacked this gay pride parade through Muslim areas as a display of racism and white privilege.

Many leftists are also calling for the parade to be legally banned, and for the people who organized it to be arrested for “hate speech” against Muslims. (What about the real hate speech against Gays BY Muslims?)

In Nørrebro, Copenhagen (where only 30% of the population are Muslim, as opposed to the more than 75% in the Swedish areas), gay pride parades learned the hard way not to tread within Islamic strongholds.

Formerly, there was a large gay pride parade that went through Nørrebrogade (the main high street of the area). Gays would take stones to the head every year from Muslims, so they re-routed.

So, there you have it, folks.  When it comes to the Oppression Olympics, Muslims will always rank higher than gays.  You might be stoned, raped, beaten, beheaded, or even hanged – but at least you won’t be called “racist.”

Please email me at ba[email protected] if you would like to donate by personal check.