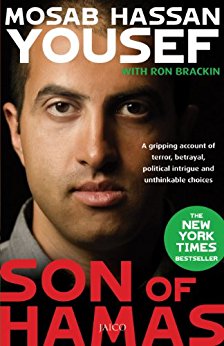 After hearing the usual blood libel and slander against Israel by Arab Muslim members at the UN, watch the stunned faces of the Palestinian delegation during the remarks of Mosab Hassan Yousef, the son of Hamas founder Sheikh Hassan Yousef.

I have a feeling we have US Ambassador to the UN, Nikki Haley, to thank for this.

NPR  During the 1980s and 1990s, the Yousef family was akin to royalty among Palestinians in the West Bank. Mosab Hassan Yousef’s grandfather was a popular imam. And his father was one of the founding members of the militant Islamist group Hamas.

The assumption was that Mosab Hassan Yousef would follow in his father’s footsteps. Instead, he became an undercover agent for the Israeli security service, Shin Bet, a decision he explains in his memoir, Son of Hamas.